Technology To The Core, Science and Technology with Indira Gandhi

Book>>Technology To The Core, Science And Technology With Indira Gandhi by Ashok Parthasarthi Pearson Longman 2007

I recommended your book--based on diaries you diligently maintained--as essential reading to an up-and-coming, middle-level engineer-manager in the Defence Research and Development Organisation (drdo). I also recommend it to all in her age group who were in middle school when you were provided that unique opportunity by Indira Gandhi to be an on-line participant in, and techno-administrative chaperon to, the momentous events that punctuated what K R Narayanan, the late president, has in his 'Foreword' to your book characterised the "second wave" of building our scientific and technological institutions.

To appreciate fully the significance of this "second wave", and the trials and tribulations of those who were present at its creation and cresting, I advised Nabnita to acquire a historical perspective on institution-building in the "first wave", to which end I recommended Robert Anderson's monograph-length McGill Occasional Paper of 1975 'Building Scientific Institutions in India Saha and Bhabha'. I also recommended his two-part opus on P M S Blackett as advisor to both Nehru and Indira Gandhi. My drdo ex-colleague was, of course, already familiar with Blackett's report of September 1948 on 'Scientific Problem of Defence in Relation to the Needs of the Indian Armed Forces'.

"Gripping!" Nabnita exclaimed, "reads like a Robert Ludlum thriller." Indeed it does, and not surprising, I told her, given the intrigues--national and international--aimed at sabotaging our efforts to build and nurture the institutions and programmes that characterised that "second wave".

I advised her to read Chapters 1 and 5 together, as they deal with your time in the Old Yacht Club in Bombay and with the atomic energy programme. I also suggested that the 1998 nuclear tests and contemporary events with regard to the Indo-us nuclear 'deal' can be better appreciated if she read these chapters in conjunction with the C V Sundaram, V Krishnan, T S Iyengar volume brought out by the Department of Atomic Energy (dae) on 'Atomic Energy in India--50 years', together with its review by Haridas Banerjee in Current Science, 10 December, 1999. And although much has been written elsewhere--also by you--on the Council of Scientific and Industrial Research (csir), I asked Nabnita to read the period covered in your Chapter 8 on csir along with the section on 'Blackett and csir', in part two of Robert's opus--again for historical perspective.
Gunnar Myrdal's remark at a banquet in Stockholm in June 1972--"Ashok, I have heard your prime minister, but I still say you are a soft state"--must surely have catalysed Indira Gandhi's decision later that year to "change the mind-sets of those in the West who are supposed to be our friends". She determinedly did that in May 1974 as you relate in the section of Chapter 5 titled 'The Peaceful Nuclear Explosion Experiment'. Although I didn't want to prejudice my friend, I did proffer that these chapters, and Chapter 3--'The National Committee on Science and Technology (s&t) and s&t Plan'--were the best. 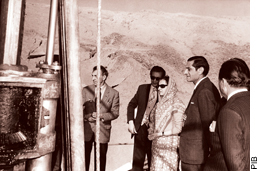 And not only because you lay out in them the insider's untold story of the dae and the National Committee on Science and Technology (ncst) but also because you have not shied from being the long-overdue iconoclast, albeit a gentle one, of both Homi Bhabha and Vikram Sarabhai. I suggested to Nabnita that she read Chapter 3 from three perspectives. The first is the unique confluence of political forces (Indira Gandhi, C Subramanium, Mohan Kumaramangalam) committed to self-reliance, advised by a youthful and idealistic scientific leadership (C N R Rao was only in his thirties) and bureaucratic activists (P N Haksar, you, Lovraj Kumar--perhaps a little bit of me too) that enabled the first post-independence effort to increase both the volume and density of the national s&t infrastructure; and to link--with 'demand-side' policy instruments--that infrastructure to national defence (Chapter 7), industrial (Chapter 9) and agricultural purposes (Chapter 10).

The second perspective comes through when Chapter 3 is read with Chapter 9 on 'Industrial Technology'. Along with the three factors of production that economists understand, namely, land, labour and capital, there is a fourth--technology--without which the first three cannot come together. Who owns this fourth factor, how it is deployed, what returns accrue from its use and to whom, are the substance of the political economy of technology.

The third perspective is the post-Bangladesh geo-economic environment characterised by a confluence of unfavourable events such as suspension of us aid, the knock-on effect on the rupee with the fall of the British pound.

This is the context in which Indira Gandhi got ncst to enunciate a doctrine--for that is what it was--of technological self-reliance, co-equal with economic self-reliance, but really coming into conflict with the latter at several levels and dimensions of political economy as it was then (as now) practised by economic planners and administrators. Some of the tension you describe in Chapter 3 between the Planning Commission's approach and the ncst's towards the Fifth Plan is attributable to the (continuing) failure of the 'dismal science' of economics and its even more dismal Delhi School practitioners to fathom technology as the crucial fourth factor of production, a feature which Indira Gandhi understood very well. Why have you pulled your punches on this tension and how Indira Gandhi did not really handle it as well as she might have done?


Chapter 11 on environment should be read in detail by readers of Down to Earth and by all ngos concerned with wildlife and the environment and mandated regulation on the "polluter pays" principle. The 'diesel exhaust' problem remained to cause lung related diseases in Delhi right up to the time cng replaced diesel as the fuel for buses and three-wheelers. You rightly say that the National Committee on Environmental Planning and Coordination's decision on the environmental-impact abatement measures for Chilika lake owed a lot to "the excellent documentation on each case which had been prepared by the oepc [Office of Environmental Planning and Co-ordination]". I wish you had added that those papers were prepared almost single-handedly by a young Ashok Khosla, now an internationally recognised name in the ngo world spearheading the sensible sustainable use of our environment.

Readers of chapter 11 will also be struck by how you did not let your commitment to maximum self-reliance in defence cloud your judgement to proffer to Indira Gandhi the responsible course of action on the location of a critical radar installation on Delhi's vulnerable ridge. Chapter 6 on space brings back memories of my recruitment in May, 1974 by Satish Dhawan as a member of his Systems Planning and Analysis Group. Let me add a vignette to your section in this chapter on 'Agents in the Procurement of insat'. The attempt by bidders for insat satellites to appoint ("recruit" really) minister-bureaucrat agents continued into the Morarji Desai government. The procurement file sent by Dhawan to be approved by Desai carries a note over the latter's signature to the effect that the exercise was the "most thorough-going one I have encountered in my entire administrative career".


For the rest, I am afraid there are errors of fact and interpretation. For example, the 'Valiant' was 'reverse-designed', so to speak, from what was known about the Rolls-Royce rz2 which powered the already-cancelled British Blue Streak endo-atmospheric irbm. Thus, it was unsuitable for exo-atmospheric performance, an essential requirement for a liquid-fuelled rocket engine for a space launch vehicle. Nevertheless, I am glad you have told your version of the 'Valiant' story; for, Ramdas Shenoy's official history of drdo released in February 2007 carries no mention at all of 'Valiant'. However, I have suggested to Nabnita she also read Angathevar Bhaskaran's D.Phil thesis (completed under the guidance of our common friend Norman Clark at the Science Policy Research Unit in the University of Sussex) on the impact of the missile technology control regime on our Space programme.

Thank you for telling this absorbing story for Nabnita and all scientists and engineers of her generation who need to be ever-so-gently reminded that the scientific and technological India of today--for all its inadequacies and infirmities--did not materialise with a wave the invisible hand.