We hear news about sharks killing divers every now and then. Sharks are among the better known marine creatures. Yet they grab media attention only when they turn their fangs on humans. It’s another matter that humans have killed sharks for centuries. Shark fin soup is a delicacy in many countries of South and Southeast Asia.

Other creatures of the seas and oceans are less fortunate. They do not get press even in times of catastrophe. In 1998, for example, rise in temperatures in the eastern Pacific caused by El Nino resulted in mass bleaching of coral reefs, home to about a quarter of all marine species. The event passed unnoticed, except among a select lot of conservationists. The corals are marine equivalent of rainforests. Imagine a calamity like the one in 1998 befalling rainforests.

We do not care much about the troubles of marine creatures, except perhaps when they are big ones like seals and whales. Tales of overfishing sometimes make news. But the troubled life of algae seldom gets any press. There is something selfish in the way we care for seas and oceans. As a result, there is hardly any comprehensive work on how the fortunes of seas and oceans have changed in the past few decades. Callum Roberts’ The Ocean of Life fills this gap.

Roberts, one of the world’s leading conservation biologists, takes us on a panoramic underwater tour, answering questions that bog many of us. Why do currents circulate the way they do? Where exactly do they go? How has the chemistry of the oceans changed?

Roberts shows the oceans have changed more in the past 30 years than in the rest of human history. In most places, the seas have lost upwards of 75 per cent of their megafauna—large animals such as whales, dolphins, sharks, rays and turtles—as fishing and hunting spread in waves across the face of the planet. For some species, like whitetip sharks, American sawfish or the once common skate, numbers are down as much as 99 per cent. By the end of the 20th century, almost nowhere shallower than 900 metres remained untouched by commercial fishing. Some places are now fished down to over 3,000 metres. 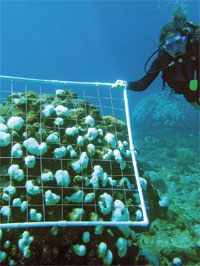 An estimated area equivalent to half the world’s continental shelves is trawled every year. Yet what they are scraping is the bottom of the barrel. For all the marvellous improvements in technology, British fishers, mostly using sail-power, caught more than twice as much cod, haddock and plaice in the 1880s as they do today. By one estimate, for every hour of fishing with electronic sonar fish finders, industrial winches, dredges and nets, they catch 6 per cent of what their forebears caught about a century ago.

Roberts’ account also goes into understudied areas like pollution caused by the run-off of agricultural fertilisers. According to the York university scientist, such pollution has created over 400 dead zones where algal tides rob the seas of dissolved oxygen for almost the entire year. One of the biggest such zones, at the mouth of the Mississippi Delta in the Gulf of Mexico, covers 20,000 sq km. This annual event even makes the one-off Deepwater Horizon oil-spill look modest.

Roberts discusses more fashionable topics like global warming and brings fresh insights into it. He shows how the global warming resistant capacities of seas and oceans have suffered in the recent times. Till recently, the oceans sucked up most of the additional heat, sparing the continents from further warming. This is now starting to change—faster than almost anyone had dared imagine. With oceans also warming, less oxygen is making it down to the depths, playing havoc with marine life.

Uma Venkataraman is a geographer by training and editor by profession. She can be contacted at venkatuma@yahoo.in