In August 1992, a start-up based in Hyderabad applied to the Videsh Sanchar Nigam Ltd, also called vsnl, for a satellite connection. The company had bagged an assignment from the US engineering-major John Deere Corporation. It was a sub-contract actually. Deere had been assigned the engineering task by the software giant ibm in the first place. This was among the first ripples that about five years later turned into the wave of outsourcing. The Hyderabad-based startup in question was Satyam. vsnl provided the fledgling firm a satellite connection at Rs 24 lakh per annum.This satellite connection between Satyam's offices in Madras, as Chennai was called then, and Chicago was the first commercial satellite link to be used by an Indian software company.

This is among the interesting bits of information that Dinesh C Sharma provides in The Long Revolution The Birth and Growth of India's IT Industry. It's a pity that the muck around Satyam has overtaken an interesting part of Sharma's story. But the company barely takes up 10 pages of Sharma's magisterial book.

Many of us trace the beginnings of this industry to the 1980s. Rajiv Gandhi and Sam Pitroda are usually regarded as the torchbearers of India's it revolution. For Mishra, however, the story begins in the years just before India's freedom and later among the main architects of India's planning regime, Prasanta Kumar Mahalanobis, statistician, was asked by the colonial state to conduct estimates of the paddy crop in Bengal in the aftermath of the Bengal famine. For this work, Mahalanobis needed computing machines. This was difficult during war times, so he decided to develop computing machines locally. 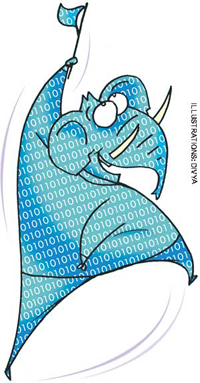 A non-profit body, Indian Calculating Machine and Scientific Instrument Research Society, was set up in Kolkata for the purpose. After independence the work of this society was consolidated at the electronic laboratory at the Indian Statistical Institute. Samarendra Kumar Mitra who spearhed the efforts at the statistical institute, was not an engineer. He was a chemistry graduate who was exposed to digital computers while working at laboratories in the US and the UK. There were no magnetic tapes or floppies. Data was punched into cards made of stiff paper.

Sharma is an effective chronicler, attentive to the minutest of details. He points out the efforts to develop computers in India benefited from a fortuitous turn of events. In 1959 Homi Bhabha ran into ibm's director of research E R Piore on board a flight to Zurich. When Bhabha mentioned plans to acquire a powerful computer for atomic energy work in India, Piore suggested that his company could help. This was the beginning of an almost 20-year association of state-backed Indian computing endeavour with the US computer biggie.

Sharma is not the archetypal business history writer dismissing all state-sponsored efforts. He notes a large industrial infrastructure for electronics manufacturing was created in the public sector. But he does not overplay the role of the pre-liberalized state in India. He is attentive to the fact that Indira Gandhi's restrictive policies were responsible for India missing the hardware bus.

The Long Revolution is not just about highbrow state research. There are interviews with small software developers in Noida and Hyderabad. There is a delightful description of the computerization of railway reservation.

The book ends on a hopeful note. "There are many more Silicon Valleys waiting to be discovered," Sharma writes. But will the Silicon Valleys come with more Satyams. There are fault lines in India's revolution that require examination. The book shows us that.

Ananth Nayak works for an e-solutions firm in Hyderabad