As a child, I would look forward to the vacations. Not just because they usually meant a visit to a relative in the southern or the eastern part of the country.

But also because the visits involved a train journey, taking turns for the window seat to look at the rural landscape speed by, and oily food. Such romance seems unfashionable in these days of cheap air travel. But in Europe trains seem to be fashionable again.

What’s the smartest way to travel to London from Paris? Take the Eurostar and impress your friends with your green credentials.

Amid this renaissance, Christian Wolmar has written a general history of the world’s railways, and Blood Iron and Gold is as fascinating as the journeys of yore.


The British historian makes the case for the transformative effect of rail well, but the joy of his book is in the boyish glee with which he charts the advance of rail networks. He delights in “heroic” feats of engineering such as the reversing sections in India’s Western Ghats, which allow trains to negotiate hairpin bends, and the spiralling tunnels of the Gotthard Pass land, which let them literally climb the Swiss alps. 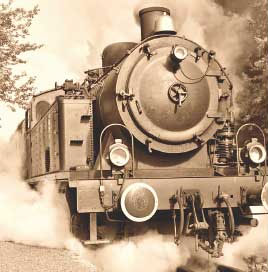 The account is not a complete romance. Over 25,000 railway labourers died in the first 10 years of the Indian railways. In America, timekeeping was so poor that the phrase “to lie like a timetable” gained currency. In colonial Malaysia, Chinese workers, employed on slave-labour terms, fell victim to an epidemic of suicidal depression. While some hung themselves from trees, others paid the Malays to chop their heads off with machetes.

In France, meanwhile, intellectuals agonized over the aesthetics of railways before the state applied itself to build what would become the biggest high-speed network in Europe. The language of French railways is beautiful; it gave us the word “express”.

Blood Iron and Gold is the work of a scholar who loves his tracks. Read it for the fascinating revelations such as trains never ran on time in fascist Italy.

Shefali Kukreti is with the IAS. The views expressed here are her own