1992 was a landmark year for local governments in India. Parliament passed the 73rd and 74th constitutional amendments which gave panchayats and municipalities such powers to function as institutions of self-government with regard to matters under the Constitution's Eleventh and Twelfth Schedule. Wat have been the fortunes of these Acts?

The implementation of the 73rd constitutional amendment is widely talked about, but the Act relating to the municipalities is less discussed. The book under review, edited by two scholars from the Netherlands, fills this gap.

The research more than 10 years after the act came into force has insight.In short, urban governance in India is far from fulfilling the basic criteria of decentralization and granting power to the people. The constitutional amendment is on paper and the states do not care about their implementation. True, elections are held. But that is not because of commitment to ideals of local government, the elections are a result of judicial intervention. 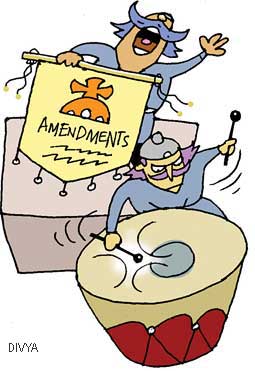 Who rules urban India, the so called engine of growth? This study of Mumbai, Kolkata, Hydera-bad, Chennai and Delhi establishes how the cities suffer from the nexus of powerful political forces and economic interests politicians, officials on the one side and builders and the land mafia on the other. This nexus stands in the way of making the provisions of 74th amendment a reality.

People's participation in governance and development were the central issues our leaders were concerned with since Independence. The 74th amendment gave us hope that ward committees would ensure people's participation in urban governance. The study shows these committees do not function because of "weak planning systems, poor human capacity and rampant corruption". Kerala, and West Bengal to an extent, is an exception.

The study discerns a very disturbing trend municipal councillors are a marginalized lot. The research also shows workers and slum dwellers have no place in the city's development.

This book will create a knowledge base for action.