War is upon us

Book>> How The End Begins: The Road To A Nuclear World War III • by Ron Rosenbaum • Simon and Schuster • US $28

About five years ago, European media described the imminent possibility of a US strike against Iran’s nuclear infrastructure.

It seemed plausible at the time, given the Iranian regime’s declaration of war against the US, Israel, and the UK. About the same time, Iran’s top military strategist, Hassan Abbasi, publicly declared war plans against the west. There was a veiled threat of use of nuclear weapons. The matter died down after attracting media attention for a few weeks.

The coverage was symptomatic of how media has dealt with matters pertaining to nuclear weapons. Sensational episodes grab headlines. Global nuclear destruction is, in the minds of many observers, largely a forgotten hazard. Society has become so used to the notion that nuclear weapons are a compelling deterrent, but no one seems crazy enough to actually use them.

US journalist Ron Rosenbaum does not believe so. In How the End Begins: The Road to a Nuclear World War III, he writes, “We are, and always have been, perilously close to nuclear war at any given time.” He charts the likely origins of a nuclear war in the short term, probably in West Asia—where Israelis fear a second Holocaust, this time a nuclear one—or Pakistan, where stray nukes may yet land in the hands of Islamists or in tensions and miscommunications between the Russia and the US. South Asia is a nuclear flashpoint.

While the US and Israel deny any formal nuclear umbrella arrangement, there is widespread speculation that the US has warned nations contemplating a nuclear strike on Israel of severe consequences, which implies anything, including nuclear reprisal. In fact, in 2008 in the contest for the Democrat candidate for the US president, now secretary of state, Hillary Clinton, declared that the US would “obliterate” Iran if it attacked Israel with nukes.

Rosenbaum draws us to such episodes and in process pursues thorny moral questions, including one about nuclear retaliation: “Would it be justice, vengeance or pure genocide to strike back once a country has been comprehensively bombed?” When under attack a nation almost always responds in kind, with the exercise of military power to fend off the aggressors, preserve remaining lives and, ultimately, win the war. But when the weapon of choice can kill billions is a reaction that wipes out the rest of humanity morally justifiable?

Rosenbaum does not much engage with literature that dismisses nuclear peril, but writes “only luck has saved us, our luck is bound to run out.” He quotes a study by Carnegie Endowment for International Peace that the world “is at tipping point.” At places the book takes unnecessary detours towards a range of writers: Dante, Terry Southern, Philip Roth, Cormac McCarthy. Overall, however, the gravity of the topic is never undersold. Make no mistake. We are in a new nuclear era, with new rules and new kinds of brinkmanship. The threat of destruction of humankind is real. But then so are the possibilities for secure peace. The path we take depends on our politicians.

Subhadra Schneider is a New-York based writer on international affairs 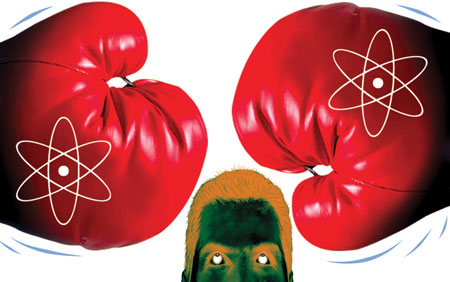