The book under review is about a sordid chapter in the history of medical invention. In the 1940s, US president Roosevelt launched an initiative to develop antibiotics to treat animals and humans, and to deal with the potential threat of biological warfare. Among the graduate students in the department was Albert Schatz, who was analysing soil samples to find an antibiotic that would cure tuberculosis. In his 11th experiment he succeeded, isolating two strains of a microbe. Schatz’s supervisor Selman Waksman arranged for the Mayo Clinic in Rochester to test the antibiotic on guinea pigs, and then on humans. It worked. Streptomycin cleared up infections that had defied even the first wonder drug, penicillin.

Waksman was awarded the Nobel Prize and deified as a significant figure in medical pantheon. Acting as a fatherly figure in the beginning, he bullied his junior into signing away all rights, while secretly cutting a deal with drug firm Merck. Schatz challenged Waksman and received partial recognition. But by and large, the scientific community upbraided him for taking on his supervisor. Schatz had a comparatively low-key career. Streptomycin is still used against tuberculosis and other diseases. 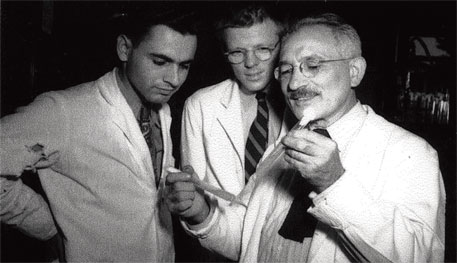 In Experiment Eleven, journalist Peter Pringle uncovers the intrigues that made up Waksman’s felony. Pringle draws extensively from Shatz’s notebooks. The notebooks, as he points out, have faced scrutiny before. On being challenged by Schatz, Waksman produced them before a commission of inquiry. Pringle writes, “One fine day, Waksman said in a deposition before Rutgers University-appointed commission, one of my assistants reported to me that (Schatz’s uncle) broke into the laboratory and carried off Schatz’s notebooks, which were returned 48 hours later.”

Waksman added that later he discovered that a page covering a crucial experiment had been “very neatly taken out”. This statement tilted the case in Waksman’s favour. To sideline Schatz, Waksman propagated a fictitious account of streptomycin’s discovery involving an infected chicken. Decades later, Schatz joked with Wainwright, “I don’t know what the normal lifespan of a chicken is, but this sick chicken has been alive for half a century.” Schatz’s wife told Pringle, “Almost as soon as Albert found streptomycin, Waksman started to change the story. Here’s this young graduate student who’d only been at the lab a few months, was drafted, came back from the war, and he makes this discovery. Somehow that didn’t translate into recognition.”

Pringle believes the case illustrates the hierarchical nature of science research. “Waksman came from a European science tradition (he was a Russian immigrant) in which lab directors felt entitled to credit for whatever their lab workers found. He was 56, near the end of most science careers. And he could not resist the capper, the Nobel Prize.”

Much of what Pringle writes seems to have an uncanny resonance with contemporary research. In many places, it is standard practice for supervisors to put their name on papers by students or subordinates. If the supervisor has contributed significantly in ideas, work and writing, this is fair enough. But sometimes the supervisor has done little more than discuss and read through the student’s draft, offering a few comments. In extreme cases, the student’s name may only appear in the acknowledgements—or not at all.

Amrita Ghai is a PhD
candidate at the department of zoology, Delhi University