Where are the heroes?

The Indian Space Research Organization (isro) has delivered more than just payloads into outer space. It has returned two rupees for every rupee of tax-payers' money used and reaffirmed the country's faith in its ability to chart an entirely indigenous space programme. Having proved the fact that their activities have been largely driven by and directed towards social development, by showing tangible achievements in areas of the 3 Cs-- communications, connectivity and computers--and by having the largest network of satellites in the world, isro has earned its Second Vision. A vision that marks a shift from (only) society-centred, to basic-science, or science-for-science's-sake programmes (also) such as Chandrayan Pratham, clearly just the first of many such missions.The moon must be studied. The pitch is clear and its repetition forms the bulk of Pallav Bagla and Subhadra Menon's book Destination Moon.

Why must the moon be studied? We are told it is an object of fascination, romantic allusions, we need to know when to celebrate festivals, it features in countless mythological fables. Under standing its chemical composition will help us exploit its resources in future. Knowing whether there is water or ice on the lunar poles will help us plan where to land on its surface, and Destination Moon is but a stop-over en route other planets. The availability of high quality data from Chandrayan-1, it is hoped, will spark a renewed interest in basic sciences amongst the youth. It is a matter of pride that the Indian tricolour has landed on the moon. We have entered the "elite Lunar Club", achieved "international parity", there is the security angle after all. 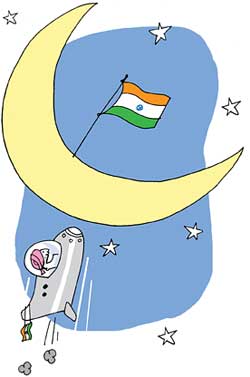 Despite the disclaimer that the book is not a tome on the Indian Space programme (in general), or a compilation of various milestones achieved by it and other lunar missions in other countries, these are subjects that are handled well in the book. Apart from the Indian Satellite (insat) and Indian Remote Sensing (irs), isro is running edusat programmes linking classrooms with universities and schools across the country, running village resource centres, where information regarding the weather, prices, agricultural methods can be accessed by local communities and panchayats. Their communication information centres have helped more people get online than before. These, as the authors point out remain under-utilized services. The Antrix Corporation run by isro, with a turnover of Rs 664 crore provides end-to-end services in satellite-related services including piggy-back rides (launch services) to other countries. That isro, through its emphasis on transparency, failure analysis, and outreach programmes has created a model worthy of replication by other government organizations and departments is evident. We are led through some descriptions of the technical components of Chadrayan-1 and reckon there is cause for celebration. Celebration is what the book was supposed to be about, but fails.

Moments of drama in the book involve announcements, people who made them, and the locations they were made in. Lucknow, where the 1857 Mutiny was launched, and its Chhattar Manzil where plans for Chandrayan-1 were announced, the grand Durbar Hall in the Fateh Prakash Palace in Udaipur, where yet another international conference about the moon was held, President Kalam's refusal to sit on the silver throne offered to him there, find mention. What of the real drama involving the real players associated with Chandrayan-1? What about scientists and technicians drawn from disparate vocations, working under time and budget constraints? The journey from idea to fruition, their many moments of apprehension and joy, the triumph of teamwork and leadership, of creativity, in a laboratory setting? There is not even one such story that the authors tell us. Only the top-brass in various organizations are interviewed and quoted. Behind the jubiliant expressions of happiness and relief at the milestones achieved by Chandrayan-1 in control rooms, its launch, transfer of orbits, landing, is the real story of putting it all together which remains untold. This, in my opinion, is the glaring failure of the book. Let us celebrate the people who own Chandrayan-1.

At the outset, the authors remind us that the book is not a "critical analysis of successes and failures". It is a celebration of Indian science and its achievements. Is the very decoupling of the two not the reason for the dismal performance of several other science and technology departments in the country?