If you are not a medical expert, chances are media reports on swine flu are likely to floor you. Reports on who declaring the outbreak a pandemic are common. But you might also read an expert announcing the fever is not dangerous at all. The media does not deem it necessary to clear the confusion.

It's such reporting Ben Goldacre takes to task in Bad Science. He also takes on the nutrition and the cosmetics industry. Most science writers, he says, are humanities graduates and we should rely solely on real "scientists' communications". 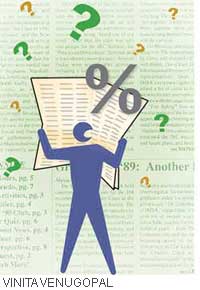 Well said. But does the archetypal scientist communicate well. And who is to vouch for their credibility? Don't scientists end up in the payrolls of industry. Goldacre falls into the same trap for which he excoriates the media.A lot of his assertions are not backed by evidence.

This is not to say Goldacre's assertions are false. But after being pounded into asking for evidence, surely we shouldn't bear with Goldacre if he dishes stuff without the evidence to back them.

At times, however, Bad Science is an education in how to read a newspaper. The most memorable section of this book is Goldacre's dissection of the media's use of risk percentage. Many of us have been struck by headlines like "80 per cent chance of contracting Alzheimer's if you can't spell your wife's name right".

The media is in love with elative risk stated as percentages, which is about the most deceptive and misleading way one can present risk.

After reading Bad Science, I am instantly suspicious of any news story about risk that uses percentages.

Prateek Lal is a history student at Delhi University