Why some become addicts

I get immense joy every time I hear Ustad Parveen Sultana’s rendition of Dayani Bhavani in Raag Bhavani or Miles Davis’ rendition of the opera version of Dubose Heyward novel Porgy and Bess. It is hard to put my feelings into words. But I know my foodie friends get this ineffable sense of pleasure after a meal at their favourite eating joints. Others might associate this feeling with sex. Yet others with shopping. For some the pursuit of this emotion leads to addiction to dangerous hallucinogens. Sure enough, humans have an innate longing for pleasure. But why does this lead some to addiction?

David J Linden, professor of neuroscience at John Hopkins University in the US, attempts answers in The Compass of Pleasure. Linden draws on scientific findings to explain how pleasure manifests in brain. Our pleasure circuits are the result of a combination of genetics, stress and life experience, beginning as early as in the womb.

Our legal systems, religions and educational systems are all concerned with controlling addiction. We have created detailed rules and customs surrounding sex, drugs, food, alcohol, and even gambling. But Linden argues that addiction is not fundamentally a moral failing—it is not a disease of weak-willed losers. Understanding the pleasure circuit helps us better understand and treat addiction, he says. 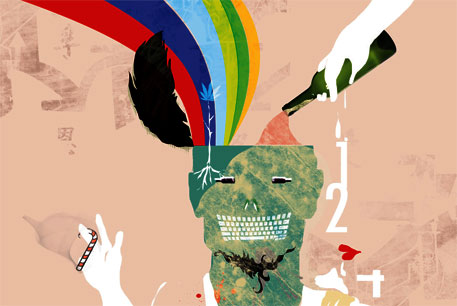 Though it may be hard to be compassionate when addiction is used to justify inappropriate behaviour, Linden argues that true addicts are not just resorting to vices because of desire. In fact, addicts derive little pleasure from their so-called vices. Addiction is actually rooted in the brain’s inability to experience pleasure. For addicts, he says, it is the hunt for these experiences that becomes more pleasurable than the high. The intensity of craving remodels their pleasure circuits, causing desire to outpace pleasure.

Pleasure evokes neural signals that converge on interconnected brain areas called medial forebrain pleasure circuit—tiny clumps of neurons in which neurotransmitter dopamine plays a crucial role. This pleasure circuitry, refined over millenniums of evolution, can also be artificially activated by substances that carry a risk for addiction, like cocaine, heroin, nicotine or alcohol. There are variants in genes that turn down the function of dopamine signaling within the pleasure circuit. For people who have these gene variants, their mutated dopamine systems lead to blunted pleasure circuits, which affect their pleasure-seeking activities, he says.

Humans, in fact most animals, are hardwired for uncertainty, and that sometimes plays havoc with their dopamines. When you set up a little gambling situation in which someone signals that there is going to be an outcome in the near future, during the interval when it is unclear whether or not you are going to get a reward—money for humans, a shot of juice for monkeys—in that five seconds, you see a gradual ramping up of dopamine release. This leads addicts to find pleasure in the craving itself. But unfortunately, it is not something they realise.

Atul Chandrasekhar is a PhD candidate in anthropology at Delhi University