In the first week of September, the media was abuzz with the news that Stephen Hawking had proclaimed that God did not create the universe.

The headlines pertained to Hawking’s first book in more than two decades. Leonard Mlodinow, a physicist and writer at the California Institute of Technology, has joined the British cosmologist in his latest venture: The Grand Design. It is no surprise that a new Hawking book has generated enthusiasm.

More so because 22 years ago Hawkings left many on tenterhooks while concluding The brief history of time. If we find a physical theory that explains everything, he wrote—suggesting that such a discovery was not too far off—“then we would know the mind of God”.

It is no surprise that the media thinks Hawking has provided answers in The Grand Design. But Hawking actually has never made any claim that he is on a mission to know the mind of God. The Brief History of Time had no place for God and its concluding statement should not be read literally.

Hawking meant that it is not necessary to invoke God to set the universe going—a proposition.

Moreover, Hawking has never expressed a need for God in his equations and his earlier mention about deities have only been a tease to his readers. There is hardly a mention of any deity in The Grand Design. In the opening pages there are a couple of mentions of clerical attempts in the Middle Ages to make philosophical sense of the heavens. Most of The Grand Design is an attempt to explain why forces of nature are fine-tuned to allow evolution of complex creatures such as ourselves. As Hawking and Mlodinow write, only the tiniest altering of constants controlling nuclear synthesis in stars will produce a universe sans the carbon-oxygen and therefore no humans. 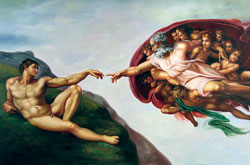 We exist because laws of our universe are tuned to exact parameters that permit the existence of hydrogen, oxygen, carbon and other key atoms, which generate laws that allow these entities to interact in ways that build up complex chemical combinations. Other universes are not so lucky.

The big novelty in The Grand Design is the authors’ application of the US physicist Richard Feynman’s interpretation of quantum mechanics to the universe.

Hawking and Mlodinow argue “the universe does not have just a single existence or history, but rather every possible version of the universe exists simultaneously”. The authors also assert that the world’s past did not unfold of its own accord, but that “we create history by our observation, rather than history creating us”.

Read The Grand Deign for temporal matters, then look elsewhere if you are in search of something spiritual. The book is entertaining as it gets into intricate questions of modern cosmology without a single equation and has lovely diagrams and illustrations to explain the complexities of our universe.