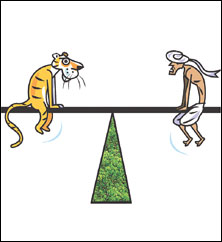 1411 tigers left. So says the latest advertisement campaign of a new telecom company and the wwf. It is powerful. It plays to our emotions. But it does not tell us what is being done, or should be done. It does not tell us how we, the consuming classes, can be part of the solution to safeguard the tiger.

The reason is simple. One must gloss over the bitter, inconvenient truth that India cannot have more than 1,411 tigers—this figure is the mid-range of the last census—unless we re-imagine conservation differently, very differently. In fact, if there are these many tigers, that’s amazing. Forget more.

Let me explain what I have learnt from some remarkable wildlifers in the country. Tigers are territorial. They literally need land to roam. With the birth of a male tiger, this search starts. Either the old tiger gives way or the male has to look for new ground. But where is that ground? All around our parks, forests are destroyed. People who live close to tiger reserves resent this animal, which kills their cattle. They have no use for the reserve forest, which protects the herbivores and wild boars that eat the growing crop. They get nothing in return for living around tiger land. They want no tigers in their land.

In Kanha tiger reserve, for instance, I learnt how field managers keep a count of tiger cubs. They know there should be an increase of 10 tigers each year to maintain a viable and healthy population. They do much to protect the tigers inside the park. But the numbers do not increase. The young tiger in search of territory moves beyond the protected—and now increasingly guarded—area. When the outside world was forested, the tiger could expand its space. But now the forests are degraded. The people who live there are poor and angry. So what usually happens is a tragedy, as happened in Ranthambore, where two young tigers were poisoned just this week.

Nobody wins in this bloody battle. This is why we have to make peace—between the tigers who need to roam and poor people who need benefits from conservation. This is why we must practise coexistence.

The numbers are stark. Irrefutable. Over the past many years the tiger census revealed many more tigers lived outside reserves. The 2001 census put the number at about 1,500 tigers inside and as many as 2,000 outside. But nobody quite believed these numbers. In 2005, the task force I chaired to look into tiger conservation suggested the method of counting be changed to be more accurate. This was done. The next census found the number of tigers in reserves was about the same, between 1,165 and 1,657. But between the two censuses, the tigers outside (if they ever existed) just disappeared. This is why numbers fell. This is why we cry for the beloved tiger. Paper tiger.

Look at it another way. The total area of what is called the ‘core’—a national park mostly—is some 17,000 sq km. Tiger conservationists will tell you the animal needs a minimum 10 sq km territory to roam, mate and live. Add it up and you will see that’s roughly why we have so many or so few tigers.

This is not to say poaching is not a problem, or to deny the sheer lack of protection because the guards are so few. These are crucial, as the task force report Joining The Dots showed. But the crisis of numbers will not go away unless we practise conservation differently.

Till now, policy has ensured people outside the reserve get nothing from protection. Over the years, with little investment and even less understanding of how to plant trees that survive cattle and goats, the tracts of land outside the reserves stand denuded. People have no option but to use the protected areas to send their cattle for grazing. At the same time, as the ruminants move into forests, the herbivores—deer and other animals—move out to farmers’ fields to forage and destroy. It is also an inconvenient fact that the tiger often survives on easier and slow moving prey, the cattle, buffalo and goat of the farmer.

The conflict is growing. In villages adjoining Bandhavgarh people told me they were worse off than birds. At least birds could sleep a few hours at night. For them the vigil to protect crops from wild animals is unending and fruitless. What an indictment of conservation.

So, if we want more land to safeguard more tigers we must learn this reality. The answer is in, first and foremost, paying people quickly and generously for the crops destroyed or the cattle killed. Currently, this does not happen. Second, we need to ensure there is substantial and disproportionate development investment in areas that adjoin a tiger reserve. People should be benefited to live in the buffer of the reserve. They must want to secure the tiger. Third, people must get direct gains from conservation. They must be preferred in jobs to protect. They must be partners, owners and indeed earners from tourism the tiger brings.

This is the agenda for tiger conservation: for 1,411 and many more. Otherwise, the media campaign will be nothing more than noise, drumming up support with more frantic chest thumping that leads nowhere.