There is something amiss about the present debate on the need to frame guidelines for public interest litigation (pils). It ignores the rationale that the Supreme Court of India put forth for such lawsuits in 1982. Delivering its verdict in the S C Gupta vs the Union of India case, popularly known as the Judges Transfer Case, the court observed that the public needed judicial safeguards against infringement of their rights at a time the state was expanding its reach through development activities. pils fitted this bill. The apex court also noted that public interest law suits were necessary to keep the state on its toes, especially in performing its duties towards citizens.

The Supreme Court bench then went on to elaborate the distinction between pils and traditional lawsuits. It said: if breach of such public duty were allowed to go unredressed because there is no one who has received a specific legal injury... the failure to perform such public duty would go unchecked and it would promote disrespect to the rule of law. It would also open the door for corruption and inefficiency because there would be no check on exercise of public power except what may be provided by the political machinery, which at best would be able to exercise only a limited control and at worst, might become a participant in misuse or abuse of power. It would also make new social collective rights...created for the benefit of the deprived sections...meaningless.

Individuals/institutions have done a great service by bringing before courts issues concerning rights of women, civil liberties, custodial deaths, environment and public health. Judgements of our supreme court, which have been recognized world over as landmarks, have emanated from these very public interest matters. It cannot even be imagined that the court will abdicate its constitutional duty of redressing public injury when globalization and liberalization have exposed public rights to newer and graver threats.

Aspects of pils have been discussed in umpteen judgements and the parameters of such lawsuits have been laid down. Their limitations have also been indicated. There is, however, an urgent need to document the jurisprudential achievements of decisions rendered in public interest matters as well as the benefits which have percolated to society. pils have, for example, strengthened the election process, they have led to mandatory disclosure of assets of candidates and verification of their criminal background. 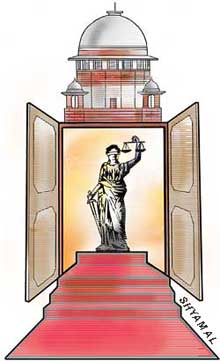 A significant fact which is overlooked in the current debate is that, in 1982, immediately after the Judges Transfer Case, as many as 10 questions were referred (in the Sudip Mazumdar vs Union of India Case) for considering the parameters and scope of public interest litigation. The Constitution Bench of the supreme court had answered these questions by an order dated August, 8, 2002. It had said that the questions formulated in 1982 do not require consideration as in the meantime, the Courts have evolved their own guidelines and principles for entertaining public interest litigation. This should have put all controversies to rest.

Any new effort to lay down guidelines will turn pil into a mechanical process. It could fall into the trap of traditional litigation from which the judiciary had extricated itself more than two decades back.

Cases which benefit society, poor and deprived can easily be identified. The bad, motivated and vexatious ones should be strongly discouraged. Thats not a difficult matter for a trained judicial mind. The apex court dismisses over 50 per cent of the cases arising out of private injury. But it still examines each case. Guidelines can result in arbitrariness and injustice. This holds true for public interest litigation as well.

Those who criticize the judiciary for being over-active forget the enormity of executive and political arbitrariness. Privatization processes have almost put paid to the states welfare activities. The court will have to be consistent and effective in implementing and monitoring its directions. But that is procedural matter. An aspiration to do justice in all situations should be the guide. That is the essence of rule of law.

Sanjay Parikh is an advocate with the Supreme Court