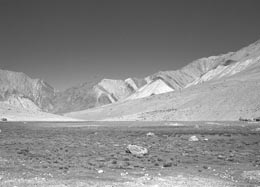 rangelands are those areas which for reasons of physical limitations like low and erratic precipitation, rough topography, poor drainage and cold temperatures are unsuitable for cultivation. Consequently, these lands are used as pastures. About half ((6,700 million ha) (mha)) the Earth's land surface is covered by the scant vegetation associated with natural rangelands.

Three distinct and interactive components, the vegetation, herbivores that feed on the pastures and the soil complex supporting them characterise rangeland ecosystems. These components not only determine the condition and class of the rangeland but also indicate the health of a particular range site. Intricate harmony is vital for a healthy and self-sustaining rangeland ecosystem. Rangelands encompass an entire gamut of vegetation varying from shrublands, grasslands, steppes, woodlands and degraded forests to dry marginal lands, problem soils and even steep topographies.

The rangelands of the Indian subcontinent include vast areas in the semi-arid and arid tropics (including the Thar desert) to temperate pastures and alpine meadows of the Himalaya. The area occupied by the Indian rangelands is estimated to be about 121 mha, about 18 mha of which lies in Hindukush region. This prime resource-base, on which multitudes of rural poor and their herds are dependent for their needs, is increasingly coming under siege. The problems of India's rangelands chiefly emanate from the following factors. The first is that active growth in the rangelands occurs during the monsoon, which lasts for barely 2-5 months of the year. The growing season is therefore brief. Moreover, the rangelands are under threat due to the burgeoning population of humans and animals.

The extensive damage inflicted on the vegetation and the depletion of the soil are interconnected. And soil degradation ultimately leads to desertification. Deserts, as is commonly known, can offer neither food nor forage. From the ecological point of view, the output of these rangelands is seen in terms of secondary production or animal products like meat and milk. It is obvious that as long as demand for these secondary products persists, pressure on the ecosystem will continue. The restoration of these rangelands is a stupendous task. In fact, it may not be possible to restore these rangelands to their pristine condition, in which they were found prior to the degradation.

Present-day rangelands are another symbol of the widespread environmental degradation happening in India. As against croplands, rangelands are generally regarded as Common Property Resources ( cpr s). Garret Hardin in his classical paper The Tragedy of Commons has aptly described the problem of the unsustainable use of natural resources. Even though The Tragedy of Commons doctrine touches on some pertinent issues of this complex problem, it overlooks the historic inequities of India's rural social fabric, which restricts the access of selected sections of society to the commons, aggravating their condition even more. It is these people on the fringes of society (nomads and pastoralists, in this case), who bear the brunt of environmental degradation. The rural rich remain largely unaffected because they have access to fodder, which they either buy in the market or cultivate themselves.

Because of the precarious conditions under which pastoralists subsist, it will be unrealistic to expect them to take an objective and long-term view of the situation. Thus, a mechanism which will take care of the current survival needs of the rural poor - apart from giving them the assurance that they will be benefited for the restraint shown by them in order to rejuvenate this resource base - needs to be evolved. Such a mechanism should adopt an approach that would specifically benefit the locals and at the same time incorporate emerging new perspectives on range ecology. A suitable legal framework to facilitate the functioning of people, governmental bodies and non-governmental agencies in tandem should also be worked out.

Rakesh Seth works for the seed technology division of the Indian Grassland and Fodder Research Institute in Jhansi, Uttar Pradesh