Campaign to make water and sanitation a right gathers momentum

Campaign to make water and sanitation a right gathers momentum 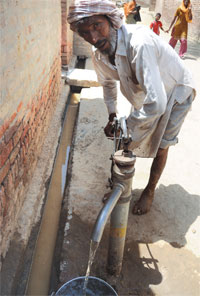 Should access to water and sanitation be a right? NGOs and public policy experts are debating this. Though the debate is not in public space, the issue is of greater public good, particularly when access to water and sanitation is turning out to be a development challenge. It also seems to be politically the right time to fuel the debate. Government has been codifying entitlements over basic necessities. In the past nine years we have got right to employment (though limited in scope), education (for primary level) and information, and a bill on right to food security is pending.

In July 2010 the general assembly of the UN declared water and sanitation a basic human right. This gave a fillip to the efforts of the Indian civil society to pursue national legislation. As a follow-up, the UN adopted a new resolution in September 2011, asking countries to ensure enough financing to enable people achieve the right. But 41 countries, including both developed and developing, abstained from voting; 122 countries, including India, voted in favour.

In India access to water and sanitation is not a fundamental or constitutional right. In common parlance, one cannot take the government to court for not providing these two basic needs. However, there have been numerous judicial pronouncements interpreting the right to life giving such right over water and sanitation. There are 44 such orders from high courts and the Supreme Court. These orders cover various aspects of water and sanitation like pollution, access to groundwater and toilets.

Right to water is also seen as a strategic move to ensure that government does not change water allocation priority in the face of growing industrialisation. There are numerous conflicts in the country over allocation of water to competing users like farmers and industry. But unlike other rights for a dignified human life, water and sanitation pose a much more complex and difficult challenge. Water and sanitation are state subjects. After the 73rd and 74th constitutional amendments, states have the power to delegate these subjects to the panchayats. This brings into debate the question of the Centre bypassing the states’ right. In a way it is contradictory to the current decentralised governance model. There is already visible resistance from the states on the Centre’s ever-increasing role in rural development through a number of schemes. Rural development, which includes water and sanitation, is a state subject. States are contesting the right to food security bill, accusing the Centre of imposing its programme on them.

During 2009-10, the department of rural drinking water and sanitation initiated preliminary discussions on such a right. Senior officials had started consultation with civil society groups for suggestions. A draft document articulating such a right also appeared for a brief period. In one such meeting in Delhi, a senior official pointed out government’s inherent fears of such a right.

The constitutional situation on water and sanitation raises more complex questions over its acceptance as a right. For example, what should be the per capita water share and sanitation facility that such a right would ensure? States have different measures of per capita entitlement of water while making allocation, and all are contested. On sanitation, what should an adequate sanitation facility include? The next thing is to fix the duties and responsibilities of the Central, state and local governments. There are many states that have not devolved water and sanitation management to local governments. In this case, how would the Centre ensure such devolution according to constitutional norm or will the new regime of right will script a different arrangement? This involves resolution of the long-pending issue of power sharing between states and local governments.

Besides, India has not been able to ensure universal coverage of water and sanitation despite spending enormous money. This indicates lack of capacity and commitment. Do the state and local governments have the capacity to assume the responsibility of guaranteeing a constitutional right? Also, given this confused state of water and sanitation, there has to be clarity on who should be punished for violation of the right. It involves complex strategic and governance manoeuvring.