Sayantan Bera tells the story of a man and a state, paralysed inside the remote islands of Sundarbans 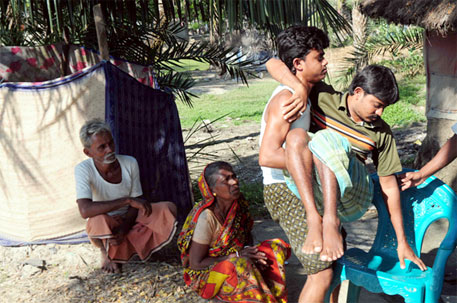 Twenty-seven-year-old Shubhankar Mandal is ready for bed by 8 every evening and wakes up by five every morning. He spends the remaining 15 hours in bed as well, except when he is sitting outside or taking a bath or defecating. All of it on a bright blue plastic chair. There is a small window by his bed. Just above is a poster of the Taj Mahal.

On the morning of May 11, 2011, Shubhankar was painting the interior of a warehouse roof, 1,300 km from home, at Port Blair in the Andaman islands. Unmindful, he slipped and fell from a height of 14 feet. The MRI scan showed a fracture in D12 of the vertebral column and disc slip in 3 three places. With severe pain in both legs and no control on urination and defecation, he was put on a ship and deported back to Kolkata. The compression in the spinal cord paralysed Shubhankar in both legs. He spent Rs 26,000 at a private facility only to be sent back to his one room hutment, on the edge of an island in the remote Sundarbans delta.

‘A corrective surgery followed by intense physiotherapy would cost Shubhankar about Rs 2 lakh,’ says Amitava Chowdhury, a general physician who has been treating Sundarban islanders at medical facilities run by non-profits. If the surgery is successful, Shubhankar will be able to walk slowly and run a grocery store, but nothing which involves hard physical labour.

I met Shubhankar on November 9 on the Kumirmari island of the Sundarbans. A day before his father had borrowed 50 kg rice and 50 kg potatoes for Rs 1,300 from a local grocery story. He plans to repay the amount after Shubhankar’s younger brother, lanky 17-year-old Biswajit, gets his dues from a Tamil Nadu contractor. After Shubhankar’s accident, Biswajit dropped out of school and left for Tamil Nadu to work at a construction site. Desperate to be back on his feet, Shubhankar asked his younger brother to return from Tamil Nadu and help him in a final attempt for treatment.

Left on its own, the landless family living on borrowed food grains can never afford the treatment. Shubhankar will have to spend the rest of his life in the room. The next time a super cyclone hits the island his wasting legs would not be able to run for safety.

The other option for Shubhankar is to commit suicide. His mother, a fragile woman in her fifties, told me of this eventuality while sobbing: ‘I know my son… he won’t go on living like this.’

My three hour stay at Shubhankar’s room was replete with long silences, punctuated by my questions and terse replies from him. His steely face neither pleaded nor shed a drop of tear. He made no attempt to evoke pity. The only time he looked fragile was when Biswajit lifted and took him to sit on a chair outside.

A day before I met Shubhankar, a reputed Kolkata psychiatrist, Kedar Banerjee, told me of the high deliberate self-harm (DSH) cases from the Kumirmari island. Banerjee has been treating the islanders for over nine years at monthly mental health camps run by Tagore Society for Rural Development (TSRD), a pioneering grassroots NGO from the Sundarbans. Cases of attempted suicide are on the rise after the Aila super cyclone of May 2009. When asked, villagers draw a blank. DSH cases are kept a secret to avoid police investigations. 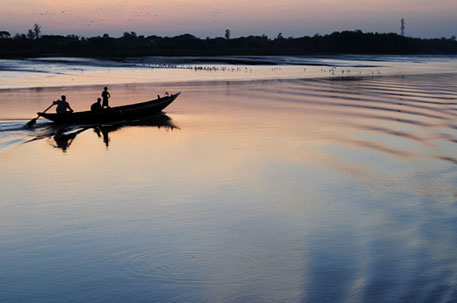 It is easy to dwell upon Shubhankar's case as one of personal misfortune. But traveling in the remotest islands gives the feeling of an impending doom. Shubhankar’s fate is not a stray event but a process over which he had little control.

Shubhankar’s great grand parents, refugees during India’s partition, came to the Sunderbans from what is now Bangladesh. The largest delta in the world, the Sundarbans stretches over 25,000 sq km, spreading across the southern tips of West Bengal and Bangladesh. The islands were formed by the silt load carried by the Ganges and the Bramhaputra rivers and their countless distributaries. On the Indian side are 102 islands, of which 54 are inhabited. Two islands have succumbed to the rising water levels while one is sinking. The mangrove forests on the uninhabited islands are home to the royal Bengal tiger, the rivers and creeks are infested with crocodiles.

Beginning 1772, the now inhabited islands were cleared of mangrove forests to make way for agriculture. The colonial rulers brought in the destitute: tribals from central and eastern India and marginal farmers from Bengal plains with the objective of generating revenue.

On the active delta, with tidal flows from the Bay of Bengal, the islands change shape constantly. Two opposing flows, salt water from the Bay of Bengal and fresh water from the rivers, constantly reshape these islands. Due to high salinity, the water had to be stopped from breaching the islands so that agriculture would become possible. Therefore, 3,500 km of earthen embankments were made during the British rule to protect the 54 inhabited islands. 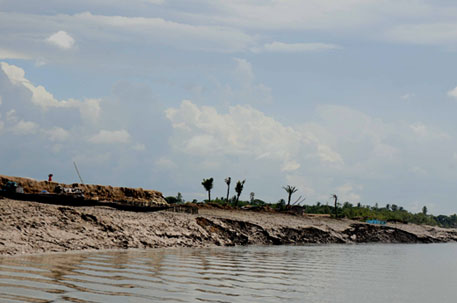 Shubhankar lives on the edge of Kumirmari island. The embankment is barely 300 metres from his hut. During the high tide, the water level in the river rises and he sleeps more than 5 feet below the water level; the earthen embankment provides a crucial but precarious protection. Changing its course, the river has been eating into the island bit by bit while creating mudflats on the opposite island. In a decade, Subhankar’s house might be submerged under water.

When the Aila super-cyclone hit Sundarbans in May 2009, about 778 km of the embankments gave way. The saline waters gulped houses and washed away precious livestock. As the cyclone hit during the day, people managed to survive by taking shelter on boats, in schools or by simply clinging to trees. For months there was no water to drink. The major casualty was agriculture. The saline waters made farming impossible for years. This triggered a mass-scale migration from the islands. The youth left, at times with their spouse and children, leaving behind a retinue of elderly, women and the disabled.

Field level surveys by non-profit TSRD indicate that 66 per cent of the eligible working population migrated from the Sundarbans. In Kumirmari island, one of the worst affected by Aila, the corresponding figure is 75 per cent. A chunk of the migration is permanent and to the faraway southern states of Tamil Nadu, Kerala, Andhra Pradesh and Karnataka or to distant islands like the Andamans. Most migrants come home only once in two to three years as transport costs are high and they don’t want to lose precious wages.

According to Kanailal Sarkar, author of  History of Sundarbans (published in Bengali) and resident of the Satjelia island, “70 percent of the people are yet to receive the announced compensation of Rs 10,000 to rebuild homes two-and-a-half years after the disaster”.

In 2009, Shubhankar considered himself lucky. Aboard a passenger ship from Kolkata, he had left for the Andamans way back in the summer of 2005. Amid the flurry of construction activity in the Andaman islands, following the Tsunami of 2004, Shubhankar immediately found work as a construction labour building cyclone relief shelters.

For the next six years he worked, taking off a day or two in a month. He saved diligently, about Rs 3,000 every month. Back home this money would be spent on food, to pay for his younger sister’s marriage and on his younger brother’s education.

Hearing of his home washed away and his family living on the embankment, Shubhankar returned in 2009 after the Aila. He spent Rs 15,000 on building two mud huts, one for himself and another for his family. This is where he lives now, paralysed. The family is yet to receive the post-Aila compensation of Rs 10,000. Had Shubhankar not left for the Andamans, his family would be staying on a fragile house built on the narrow six feet embankment. Many still do.

Like Rekha Mandal who stays on the embankment with her 11-year-old son and 7-year-old daughter. It’s been a year and three months since her husband left for Andamans. I could barely speak to Rekha. About fifteen people gather around at the sight of a camera totting reporter.

A cacophony of voices tell me that a family of eight has only one below poverty line card (BPL) card which entitles them to subsidized food grains, while the rest of the members are deemed above poverty line (APL). Most households get only one or two BPL cards that are strictly rationed. The state seems to have fixed the number of poor and then gone about identifying them.

The Central government flagship employment guarantee scheme (MNREGS), which promises 100 days of work provided no more than five to six days of work after Aila. For basic health services, people depend on local quacks while the primary health care centre covertly sells medicines to pharmacies.

Most of the people who gathered around are fishermen, honey collectors and crab hunters, traditionally dependent on the forests, working at the risk of crocodile or tiger attacks, snake bites or sudden storms. They leave at the dark of the night only to return the next afternoon. Four people, on a lucky day manage about Rs 500. 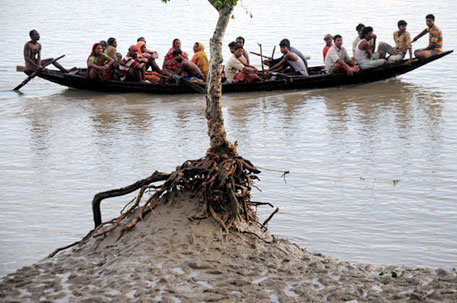 Shubhankar’s family, in contrast, worked as farm labourers. His father migrated during the season of paddy harvest to the fertile districts of Bengal. He used to single handedly feed seven members of the family, until Shubhankar took charge and left for the Andamans.

I was introduced to Shubhankar by Amitava Chowdhury, a quirky general physician, mentioned at the beginning of this piece. He is arranging funds for Shubhankar’s treatment, unperturbed that Shubhankar’s small plot of land might go under the water in a decade. Amitava has done this many times before and says, “He can shift to another island or perhaps run away. But living like this he will either attempt suicide or end up with a gangrene or bed sore.”

Few nights before, when I first met Amitava, he said with a smile, “I have developed a sense of belonging to this place. They are not going to live, they have lost hope and are leaving but I plan to see the end of it.” He reminded me of Bernard Rieux from Albert Camus’ classic, The Plague. In the novel, Reiux would relentlessly treat patients knowing he cannot win the battle against a raging epidemic and death, but simply because it is his job as a doctor to relieve human suffering. 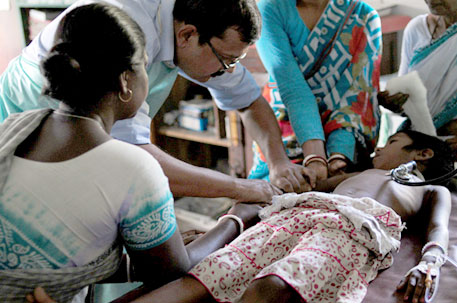