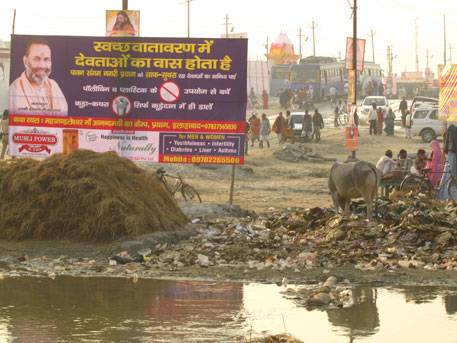 Streams of devotees flowed into Allahabad for the inaugural royal bath of Kumbh—the mother of all Hindu festivities. Makar Sankranti saw the crowd swell to more than eight million, 70 per cent rise from the 2001 festival. It was reported that more than 100,000 pilgrims had to return without a bath. Big numbers boosted by the administration stood diluted by sheer magnitude of the crowd—something Delhi non-profit Centre for Science and Environment (CSE) indicated in the advance analysis of the event.

The woes begin with vehicular traffic. The order to halt movement of any vehicle a day prior to the royal bath was poorly implemented. Cars were zooming all over the mela ground on the eve of Makar Sankranti. In fact, cars have been parked haphazardly on the ground. One wonders what is happening with 500 hectare spread of parking lots. There is no system of charging parking fee in the mela ground, while the fee has been hiked in the Allahabad city. This is tempting people to take their personal vehicles inside the mela area; one can even drive up to the ghats. As for public transport, it is almost non-existent. Pilgrims who do not have personal vehicles or cannot afford expensive autos which are too few have to walk several kilometres daily. Baba Chotunath from Sonepat informed that he had to walk 8-9 km from his tent in sector 6 of mela upstream Ganga to reach Sangam.

In an ideal scenario, parking should be a luxury commodity in events like this, higher fee should be charged for lots closer to venue and shuttle service should be provided from lots located far away. Although mega parking has been provided far away from the periphery of mela, it has not been effectively monitored.

Besides the large number of vehicles, firewood burning has affected the area’s air quality. The government has made a provision of 25,800 tonnes of foodgrains at the mela at subsidized rates. While cleaner options to cook like LPG is priced at Rs.1,325.50 per refill, kerosene oil costs Rs 63 per litre. The authorities are also offering firewood at Rs 400 per 100 kg for bonfire during cold winter nights. Uttar Pradesh Forest Corporation aims to provide 2,447 tonnes of wood by the end of the mela. Since the majority of the incoming crowd is from rural areas and lower rungs of society, most people have taken to firewood and cow dung cakes in a big way for cooking and keeping themselves warm. 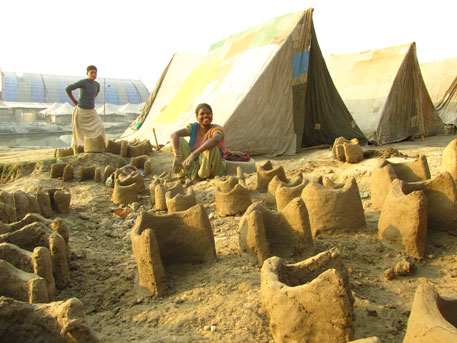 Coupled with enormous smoke contributed by regular hawans and yajnas undertaken by the religious groups and cults assembled for Kumbh, firewood burning has reduced the air to toxic smog.

Another worry arising from the large demand of firewood is illegal sourcing of wood. Those who cannot afford firewood or cow dung cakes are using garbage and solid waste. Garbage generated in the mela ground includes sizeable quantities of plastic and polythene despite a city-wide ban on all products made from plastics. A ban on sale of snacks and chips to check generation of non-biodegradable solid waste has had no effect as such items are being sold in the open. A similar ban on ritual offerings to the river is being openly violated by the pilgrims. The administration has been more concerned about controlling crowd and has ignored implementing environment protection measures. 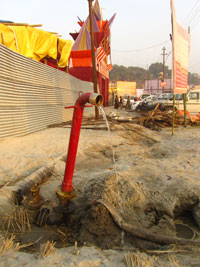 Another excess which is hard to miss is water wastage. People have been complaining about insufficient water supply. Most of the camps in far off sectors have not even received water connection. On the other hand, leaking water pipes and people watering roads with fire hydrants is a common sight. People have been seen washing their cars with water supply meant for the mela and at various spots fresh water supply pipes open into drains. On enquiry, site workers inform that roads are being watered to reduce sand and dust in the air, and fresh water in drain was meant to wash off the filth. The logic is just too much to digest when per capita supply of fresh water is as low as two litres.

One can only pray for successful completion of the event without any kind of disease outbreak. Allahabd city and its environment will face a bigger set back this Kumbh as compared to the 2001 Kumbh that left a legacy of contaminated groundwater. Sangam’s regular visitors, the winged Siberian variety of migratory birds that flock to the river every winter, have already abandoned the rivers and the city, even after improved quantity and quality of water, owing to disturbingly high noise pollution levels. Unfortunately, the unlucky local residents are not migratory.

Even the toilets are highly insufficient and most outside the main venue. Except for the ones in sectors 1, 2 and 3, which are the VIP sectors, most toilets are not even properly installed. The wall enclosures are missing and the compost pit behind the seats are open to air. Using these is in fact equal to defecating in open. Open air defecation is anyway very rampant. On the day of the royal bath (Shahi Snan) people were seen urinating and defecating all around the mela area, even on the islet located right at the holy confluence of the Yamuna and the Ganga. The 7,000 eco-sanitation toilets were mostly kept locked and the ones which were put to use choked instantly, as people are not trained to use them. 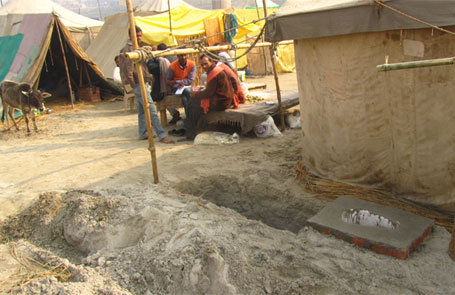 This Kumbh being spread over 55 days, the face of the mela authority was saved by swift action of sanitation workers on the second day of Kumbh. They cleaned up the mess left behind at ghats and sector 1,2 and 3 after the crowd receded after the royal bath. But with crowd only set to grow and temperature set to rise with passage of time, the prognosis seems grim. If Makar Sankranti is the standard to go by, then the 10 per cent increment in facilities over the 2001 Kumbh will hardly suffice for the 70 per cent rise in pilgrims this year. People are already complaining that arrangements this time round are below those made for 2001 Kumbh.