We are only beginning to understand snake bites better

If you are a farmer in India, chances of succumbing to a snake bite are greater than anywhere else in the world. While the country is one of the top destinations for medical tourism, in the case of snake bite casualties, we appear to be mired in the Dark Ages.

The World Health Organization (WHO) estimates that between 35,000 and 50,000 Indians die every year of snake bite. Yet in 2008, the government of India’s ‘National Health Profile’ reported a dramatically low 1,400 mortalities. Apparently six of the worst affected states did not send their death toll figures. There have never been any real numbers to show just how many souls are being taken by snakes every year.

Finally a pathbreaking project code named ‘The Million Death Study’ provides a more realistic handle on the impact of venomous snakes. The research team comprising clinicians representing several institutions from Canada, the UK and India published its findings in April 2011 in the online journal PLoS Neglected Tropical Diseases. By a process of extensive interviews called “verbal autopsies”, the study found that as many as a million Indians are bitten by snakes every year while almost 50,000 die, a third of the globally estimated snake bite deaths. In other words, for every two people who succumb to AIDS in India, there is one snake bite fatality!

This is no surprise when you consider that Indians seem quixotically prone to snake-bite-risk behaviour such as walking barefoot without a torchlight at night, sleeping on the floor and creating ideal cover and food for rodents and snakes in their midst. Once bitten, they further reduce their chances of survival by going to a witch doctor first rather than seeking the only cure, antivenom serum, from a hospital.

Across South Asia, the picture perfect rice fields are productive food bowls. Herpetologists, however, see an ideal snake-rich landscape. The flooded fields demarcated by raised embankments create perfect conditions for high densities of rodents to thrive. For nocturnal, rat-eating, farm-living snakes, life can get no better. At dusk, cobras emerge from the cool rat burrows to bask in the setting sun, and Russell’s vipers emerge to hunt prey, just when barefoot farm workers are likely to step on them. This is how the bulk of the snake bites seem to occur.

When the condition of such a patient takes a turn for the worse, he or she is belatedly rushed to a hospital. Doctors have a hard time distinguishing the symptoms of snake bite from complications caused by local treatment thereby losing critical time. This is compounded by people’s poor knowledge of appropriate first aid measures.

Even if snake bite victims and their families choose to seek treatment from a hospital, not all of them stock the life-saving antivenom serum. The patient may have to be transported over long distances to reach one that can treat him or her, especially in the remoter parts of the country. Most doctors are unable to tell venomous from non-venomous species; some rely on discredited methods such as pattern of the bite mark and number of fang punctures.

Other problems include administration of insufficient doses of antivenom serum, lack of supportive care such as ventilators (in the case of krait and cobra bites) and dialysis machines (to treat serious Russell’s viper bites). To top it all, Indian antivenom serum is of low potency and huge doses may be required to neutralise the effects of venom. The record maximum yield of venom from a single cobra is 742 milligramme, while one 10 ml vial of antivenom can neutralise only 6 mg of venom!

To top these challenges, there is an additional whammy: the venom of some species of snakes varies from one place to another. For instance, venom of the Russell’s vipers of east and south India are nerve-affecting in addition to blood-deranging than elsewhere. This means that the antivenom made using the venom of south Indian Russell’s vipers may not neutralise a bite from the same species in north India. 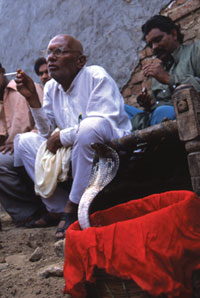 Antivenom serum is made by immunising horses with the venom of the big four medically important snake species: spectacled cobra, common krait, Russell’s viper and saw-scaled viper. However, India has four species of cobras, eight of kraits, two sub-species of saw-scaled vipers and one species of Russell’s viper. We just do not know how effective the available antivenom serum is against the venom of all these species.

The Million Death Study provides another clue to India’s snake bite problem: religion. A Hindu has a higher chance of dying from snake bite because his or her reverence for cobras has fostered a higher degree of tolerance toward the presence of snakes as well as a belief system that sets great store in village cures. But to add a pinch of salt to that theory, the Islamic Republic of Pakistan ranks second in mortality!

A public awareness campaign that employs the best techniques of the advertising industry should educate people on how to avoid snakes and highlight that antivenom serum is the only antidote to a venomous snake bite. Wearing adequate covering for the feet and ankles where most bites are inflicted, and sleeping on cots and under mosquito nets will greatly reduce the incidence of snake bite. Keeping the immediate surroundings clear of garbage, termite mounds, firewood piles and straw heaps will discourage both rodents and snakes. And most important of all: using a torch and being aware of snakes when walking at night, would probably more than halve snake bite mortality.

In case of a snake bite, the only first aid measure is to immobilise the bitten limb (like you would a fracture) and go to a hospital. That’s it. No bandages, no tourniquets. And definitely no messing with the wound in any way.

In Madurai, a group of voluntary snake rescuers provides rapid transport to hospital for bite victims. They also counsel patients and help in post bite recovery, even obtaining prosthetic limbs in the case of amputations. In the Nepal Terai, where the road network is rudimentary, volunteer village-based motorcyclists have proved effective in transporting snake bite victims to medical care. Since time is of the essence, programs like these have to be scaled up if lives are to be saved.

On the medical side, monitoring the incidence, mortality and disability rates is important so that improvements in dealing with the problem can be tracked. Rural health workers and doctors not only need training to adequately diagnose and treat snake bites, they also require access to antivenom serum and a range of basic resources such as ventilators and dialysis machines. Venom and antivenom manufacturers have to raise their standards to those established by the WHO.

We have the knowledge and the technology to make this happen. What the health ministry needs to do is to get all the stakeholders on board: antivenom producers, clinicians and herpetologists and push mitigation of the snake bite crisis into high gear.