Violinist-turned-environmentalist Aubrey Meyer has coined the phrase "contraction and convergence" and set the world thinking on the lines of equitable per capita emissions, whoever we are and whichever part of the world we belong to 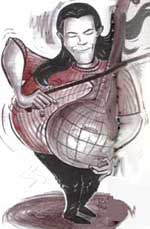 THIS is the age of the sound bite a very brief self-evident expression which, in a less trendy age, would have been called a slogan. Good phrases can cost large amounts of money to coin and circulate. "Sustainable development" was an expensive one which cost us $8 million to coin but plainly means something to most people and is proving useful. Extend a welcome then to "contraction and convergence" which so far has cost one hundred thousand times less and may prove every bit as useful and even more so. It applies to greenhouse gases and embodies the proposition that, eventually, we should all agree to the same amount of emissions per capita, whoever we are, anywhere in the world. Anything else would not be equitable. We must contract those climate change emissions and converge on the same amount per capita by 2030. In brief, we must "contract and converge".

Its childlike simplicity is its great strength. It was not invented by an international committee of diplomats or a Ph D-loaded think-tank but by a violinist. Aubrey Meyer was born in South Africa, came to London on a music scholarship and then played for the London Philharmonic and the Gulbenkian Orchestra in Lisbon. He even wrote a prize-winning ballet score before going green after reading an interview of the Brazilian environmental campaigner, Chico Mendes. Meyer decided to concentrate on climate change and set up the Global Commons Institute. Being a one-man band in the environmental business has only one virtue, but perhaps it is the most vital one: you just may be able to see the wood for the trees, and Meyer saw that. If the fears of the scientists involved in the pre-eminent scientific body on climate issues, the Inter-governmental Panel on Climate Change, prove to be well-founded, the question of mitigating climate change would ultimately turn on securing the active consent of individuals all over the world, from the very rich to the very poor.

Governments, even the best-intentioned, would have electoral reasons for delay or for softening the message. They would have to cope with agri-business or industrial lobbies and interest groups on whom the party in power might depend for campaign contributions. Meyer recognised that the history of the environmental movement is studded with depressingly instructive examples. The major non-governmental organisations are confederations of advocates of different causes and they, too, are ill-designed to put across what he saw as a single, simple but radical message.

Meyer's approach received a big boost in May when the British minister of environment, Michael Meacher, who currently heads the European Union's (EUS) environmental organisation, addressed a Globe International meeting in the House of Commons. The body comprises 500 parliamentarians from 100 countries and has worked closely with Meyer's Global Commons Institute. Its meeting was to launch "contraction and convergence" on the international stage just before the Group of Eight meeting which was being held in Britain.

Meacher, wearing his European Union hat, welcomed the concept unequivocally. He pointed out that much larger reductions in greenhouse gas emissions than those agreed in the climate change meeting held in Kyoto in December 1997 are urgently needed. He said, "Kyoto left a lot of unfinished business such as the rules and procedures for flexible mechanism... for example, on emissions trading... and the issue of such future commitments for developing countries is crucial to implementation... and one which must be addressed."

The EU favours flexible mechanisms but Meacher stressed that domestic action must be the main means of achieving emission reductions. He was particularly censorious of emissions trading in which a rich country buys unused quotas to emit greenhouse gases merely as a way of doing nothing itself. The United States, Canada and Japan fall under this category given their interest in the former Soviet Union's unused entitlements. Meacher said the EU would propose a limit on the amount of emissions reductions which would be achieved through flexible mechanisms.

The EU has suggested a maximum temperature rise of 2C and a carbon dioxide concentration of no more than 550ppm. "It means," said Meacher, "that global emissions will eventually need to be reduced by 60-70 per cent to reach stabilisation... a broad concept ably pressed by Aubrey Meyer over the past few years and I congratulate him on his dedication and powers of persuasion."

Such a fulsome public endorsement of one man's effort is very rare indeed in the ungrateful world of international diplomacy. So long live "contraction and convergence". Meacher thought there could be a review of the commitments of all the parties to the Climate Change Convention and the EU favours this as a way of engaging developing countries in it.

The previous British government's environmental minister John Cummer described Meyer's concept as crucial and said he could not see a global answer to climate change "unless there is a degree of global justice". Since contraction and convergence results in national allocations of carbon emissions, these establish "the equitable international co-ownership of the future available carbon budget" and also facilitate the international tradability of the allocations.

Having sought the right memorable sound bites, Meyer has now turned his attention to the visual with a colour graphic of memorable outline but densely loaded with information. The bottom axis is time, from the pre-industrial 1860s to the post-industrial (or post-deluge) 2090s, a century hence. The upright axis is gigatonnes of carbon from fossil fuel burning. Within the axis framework is a thin global surface temperature line slowly trending upward with a slight dip in the 1920s, and a startling graph of the quantity of emissions for each century over time, both real in the past, and to be hoped for in a better future of "contraction and convergence". There is a giant wave peaking after 2010 and beginning to turn down by 2030.

The message in words and pictures is both clear and simple, but also densely loaded with implications and, in the case of the graphic, with data sets as well. So powerful is the graphic presentation that it has been called a "yantra", a term which Buddhists reserve for the most powerful provokers of thought and reflection among the earthly minds.

Since Meyer has proved to be no mean marketing expert, he may think of finding a sponsor to make it into up-market dinner tables thus providing a basis for conservation among the influential. What is needed is someone serious, rich and fashionable to launch it on a social occasion. May be Bill Gates could leaven the launch of his softwares with something of charitable worth based on "Meyer's yantra".

Peter B Stone is a journalist based in the United Kingdom