Draining of Lake Powell, formed after creation of a dam on the Colorado river, has become essential for restoring the ecology of the Grand Canyon and water management 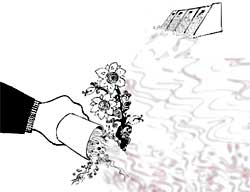 environmentalists have been expressing concern over the construction of Glen Canyon Dam for long. The dam has curbed the flow of the Colorado river above the Grand Canyon creating Lake Powell.

The dam altered the Colorado river's natural pattern of yearly summer flooding and thus eliminated the usual seasonal variations in the river flow which were responsible for the annual washing of the canyon. These floods, lasting only a few weeks, had been the principal agent that sculpted the river corridor and deposited sandbars, while removing boulders from the rapids.

With the construction of the dam, most sandy beaches in the canyon began to vanish slowly since the sediment coming from upstream got trapped above the dam. Coarse debris from side canyons obstructed the rapids in the river, making some stretches very difficult to navigate. Also, vegetation grew where it had not earlier, as floods would wash it off annually.

However, in 1983, the sudden melting of snow released water from the overflowing Lake Powell at the rate of 2,750 cubic metres per second. This overflow made a few things apparent to the scientific community and environmentalists.

On studying the after-effects of that mini flood, scientists and others observed that disappearing beaches were formed afresh downstream. In the years following the 1983 incident, overflow from the river increased. Similar flooding activity continued and scientists and others familiar with the river began to get interested in the benefits that would result from controlled flooding of the Colorado river. Thus the seeds of the March 1996 experiment to flood the Grand Canyon were sown. It was obvious that millions of metric tonnes of sand were reaching the Colorado river each year via its two main tributaries below the dam. However, due to the controlled flow of the river, the sand was not getting washed downstream and out of the Grand Canyon. This meant that the canyon was getting filled up with sand.

Biologists feared that that a flood would jeopardise the new inhabitant species. Anthropologists feared acceleration of erosion and damage to the archaeological sites near the river. Geologists were concerned over washing away of the beaches near the dam. However, the overall feeling was to put the doubts to test as benefits appeared to outweigh the fears.

On March 26, 1996, water at a rate of 1,270 cubic metres per second was released and 900 million cubic metres of water flowed through the canyon in the week-long experiment.

The results of the experiment were interesting. Sand deposits along the beaches showed an overall increase even as it moved out debris from places which were constricted by its accumulation. During the summer of 1996, a number of long-time observers believed that the Colorado river had begun to resemble its original self.

The financial impact of the flood was huge, even as it upset the electricity generation pattern for seven days, causing an estimated loss of revenue of us $1.8 million. However, an opinion emerged that future floods will be desirable to maintain the environment in the region. It appears that a variation in magnitude and shortening of the span with each flood will retain the natural pattern of the Colorado river and may well be the best way to go.

David Bower, the then executive director of the Sierra Club had supported the construction of the Glen Canyon Dam. Bower, now 83, is fighting to correct his mistake. He has now suggested draining of Lake Powell and has been supported by the Sierra Club board.

According to the findings of the Bureau of Reclamation, eight per cent of the river water disappeared between the stations recording the reservoir's inflow and outflow. The quantity of water thus lost could have met the annual domestic needs of four million people.

Draining of Lake Powell is necessary as the river and the regions dependent on it, including Baja California and the Gulf of California, can no longer afford the unconscionable loss of water. We need to get rid immediately of the illusion that the only way to protect water rights is by wasting water in Lake Powell. We can simply let the flow reach Lee's Ferry, Arizona (the dividing point between the upper and lower basins), naturally, beautifully, and powered by gravity at no cost. Draining Lake Powell means more water for the Colorado river states, especially Colorado and Utah, and Mexico. The sooner we begin, the sooner lost paradise will begin to recover.