Troubled by the degradation of soil and water, French farmers are now switching to a more sustainable practise of agriculture 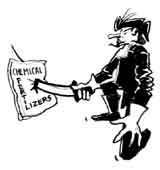 the agricultural revolution in France is over 50 years old. And now, the French are headed in a different direction. A new paradigm of agricultural development is striking roots, seeking to undo the ill-effects of the previous one. It aims at arresting soil erosion, conserving water and biological diversity and reducing the consumption of fertilisers and other chemicals. The ultimate goal of this attempt to practise sustainable agriculture is improving France's food and nutrition security and the livelihood security of rural communities, with due consideration to the carrying capacity of the supporting eco-systems. Farmers, institutions and the state are making combined efforts to achieve this.

The very face of agriculture is changing in the country. Barely three per cent of the population is currently dependent on farming for their livelihood, when compared with 27 per cent in 1954. Moreover, over a third of France's farms are referred to as "multiple occupation farms" because the people living on them are engaged in other activities in order to augment their incomes. Both these factors have reduced the burden on land.

The law of the land makes water a part of the national heritage. Water management has three basic objectives.
• Providing better protection for groundwater.
•Combating all forms of urban and industrial pollution
•Prevention of infiltration of pollutants into catchment areas.

In order to combat the problem of pollution, the French government has employed the "polluter pays" principle. Six regional agencies collect fees from those who use water and discharge wastewater. The cash received as fees is ploughed back into measures for conserving the environment. The French Parliament has taken major decisions on the issue such as the doubling of water fees. Approximately us $14 billion have been spent over the past five years on treating waste water.

Achieving sustainable agricultural development entails balancing the need for high yields with good environmental husbandry. The use of chemical fertilisers increases water pollution. To counter this, several ministries (agriculture, environment and land use) launched a programme entitled Ferti Mieax . This programme aims at providing farmers with knowledge that would enable them to change their patterns of fertiliser use. The amount of fertiliser applied nation-wide has been on the decrease. In 1992-93, for instance, the amount of nitrogen applied fell back to the 1979 level. The ministry of environment is particularly concerned about the use of biocides like antifouling marine paints, chemicals for wood treatment and pesticides. The products being used by farmers have been subject to increased control. There is also an increasing demand for organically grown agricultural products among the French. Organic agriculture excludes the use of artificial chemicals like fertilisers.

To stem the problem of soil erosion, the planting of wind-break hedges and spray irrigation has continued for the past 20 years. Land regrouping is now subject to impact studies. The French ministries of agriculture and environment have evolved strategies for the integrated management of water and soil resources.

There have also been efforts to balance farming with forestry. Forest clearance is at present subject to authorisation of the ministries of agriculture and forests. Permission could be refused in order to prevent soil erosion, and protect springs, water courses and coastal areas and to maintain the biological equilibrium of the region and the well-being of the population.

French farms have been paying the price of a high degree of chemicalisation of agriculture and industry in the form of frequent spells of acid rain. In its fight against acid rain, the country has lowered its emissions of sulphur dioxide (the major cause for the same) by half. Emissions of hydrocarbons and nitrogen oxides are expected to be reduced by 30 per cent by the end of the century.

The 400 million tonne of farm waste generated by the nation is recycled. Cleaner technologies and rationalised process designs allowing savings of raw material, water and energy, are being encouraged. These techniques account for more than half the reduction in water pollution. France has also launched an environment label to make it easier for consumers to make their decisions; by identifying products that are less damaging to the environment and encouraging producers to improve the ecological quality of their products.

A Ranga Reddy is a reader in economics at the Sri Venkateswara University in Tirupati, Andhra Pradesh.