A sustainable lifestyle in the mountains

Living with the Gaddis was an environmental lesson worth learning. 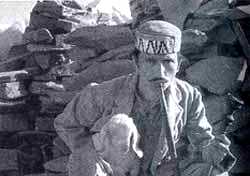 WE WERE a group of college students on our way up to Kaza in the Spiti valley in Himachal Pradesh, and the large flocks of sheep that greeted us on our way were our first introduction to the world of the Gaddis.

According to anthropological studies, the Gaddis are an indigenous tribe of Himachal Pradesh, technically described as "semi-pastoralist, semi-agriculturalist, semi-nomadic". They reside almost exclusively on the snowy range that divides the Chamba from Kangra, at heights between 1,220 and 2,134 metres above sea-level. From here they make an annual journey to the plains with their herds, to avoid the harsh winter.

Intrigued by their pastoral lifestyle, we asked them if we could stay with them for a while. The Gaddis accepted us quite matter-of-factly into their fold.

We stayed with Krishna Kumar and his family, who had camped for a few days on the grassy banks of the exotic Chandra Tal in a dera. The dera is a fascinating structure -- no more than a circle made of flat rocks piled up one on top of the other. A gap in the circumference of the structure serves as the door. The most remarkable thing is that the dera has no roof. Lying on the straw strewn on the floor to keep it dry, we gazed at the numerous stars in the clear, unpolluted skies. Strangely enough, we didn't at any time feel the bitter cold.

Inside the dera, there was a small fire fuelled by a bit of dry scrub and horse-dung. The evening meal of boiled dal and rice was cooked on this fire. The rice, which we had brought along with us, was a luxury for the Gaddis, for normally they ate rotis made of maize flour. Utensils were kept to the minimum -- just a pot and a tawa.

The other discovery we made was the Gaddis' unique relationship with their large dogs. Krishna Kumar explained the Gaddi's dog is trained to respond to its master's whistle. The main function of these amazing creatures is to keep any sheep or goat from straying too far from the herd, and to round them up at the end of the day. But they are also formidable fighters and have been known to ward off attacks by wild animals such as leopards and bears.

There is a certain method in the manner in which Gaddis handle their animals. While we were with Krishna Kumar's family, we were witness to the birth of a kid goat. Even before the young animal could rise to its tottering feet, Krishna Kumar bundled it up in a piece of cloth and put inside the dera. The dera resounded to the frantic bleats of the mother and the kid, but this seemingly cruel act was to keep the kid safe for as long as it could not accompany its mother when she went out to graze.

Our host's herd was a fairly large one -- as many as 120 animals, the majority of which were sheep. So close was the relationship between the family and the animals that Krishna Kumar's uncle claimed he could recognise each animal in his herd just by looking at its face. But then, the Gaddis regard their animals as their dhan (wealth). Late at night, you can see the sheep and goats lying around the dera in concentric circles with the huge dog moving in and out of the rows of sleeping animals, almost as if he were making sure they were all there.

The Gaddis wake at the crack of dawn to take their herds out to the pastures, and it's a hard life for them, with the hookah perhaps their only luxury. After a sparse evening meal, the men settle down to smoke their hookahs, which are full of a rich, aromatic tobacco that gives off a sweet smell, before calling it a day. Krishna Kumar claims this tobacco can be grown only high up in the mountains.

When the time came for us to say goodbye to them, the Gaddis accepted our departure with the same calm with which they welcomed us. Later, with hindsight, we city folk realised the value of our stay with them -- they had taught us invaluable lessons on how we could lead simple, sustainable lives.

Sudeep Mukhia is studying for his M Phil in history.