Two new amendments to the Constitution promise greater effectiveness in civic administration and urban planning; but is that enough? 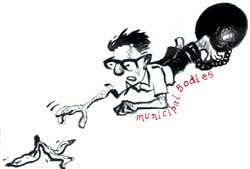 THE most critical issue concerning planners and planning in both urban and rural contexts is public participation. This is especially relevant in a situation where traditional planning approaches have failed. Physical planning has become increasingly characterised as a time and resource-consuming exercise carried out by technical departments functioning in isolation from ground realities. For instance, how many of our conventional masterplans, development plans and the like, plan for the operations of, or even acknowledge the existence of, the informal sector -a section providing important services to the society? And how many plans are actually in touch with the realities of so-called "illegal development"? Till now, planning activity has been divorced from reality and pragmatism.
The pace of urbanisation in India has greatly accelerated from 17.20 per cent in 1951 to 25.72 per cent in 1991. While that may not be a very high percentage, in absolute terms, it constitutes about 217 million people. By the turn of the century, this figure is expected to rise to 300-320 million. The volume and pace of urbanisation has tremendous implications for urban planning as well as management. Providing basic services such as shelter, potable water supply, sanitation, and solid waste collection and disposal is no mean task. According to the mid- term review of the water decade programme, ministry of urban development (1985), about 27 per cent of the country's urban population did not have access to safe water and 71.6 per cent were without basic sanitation. However, this figure can be misleading as there is a huge variation in the levels of service provided by the different states. The worst -off are the north -eastern states, followed by Orissa, Andhra Pradesh and Bihar.

Public participation in urban planning and management functions can take many forms, such as democratic decentralisation or devolution of power to the people and involvement of local communities through non-governmental organisations (NGOS) and community-based organisations (CBOS). As municipal authorities are the local institutions directly responsible for urban planning functions, it is imperative to clearly define their role and build their capacity in legal, financial and administrative terms.
The dismal picture of urban infrastructure and core services is, to quite an extent, a result of the inability of municipal bodies to cope with the increasing population pressure and demand for services. Municipal bodies in India have been performing city management functions all along, though in the guise of public health functions.

However, the functional domain of municipal bodies has been systematically encroached upon over the years. A number of their responsibilities have been assigned to other agencies, such as development authorities, water supply and sewerage boards, slum clearance and improvement boards - agencies that are responsible to the respective governments but not to the people. Another major problem with municipal authorities has been the frequent and long-drawn supercessions in a large number of cases. A direct consequence of these factors is the non-involvement of the people (or their representatives) in planning and development activities, which in turn affects implementation and enforcement.


Municipal bodies derive their powers of taxation from municipal enactments by state governments. The two taxes that form the mainstay of municipal tax resources are octroi and property tax. Non-tax sources include various levies, fees and fines, grants-in-aid and shared taxes, as well as income from various municipal enterprises. However, since the separate list of local taxes was done away with in 1935, the resource base of municipalities has been considerably pruned over the years. The most important source of municipal revenue -octroi -has been abolished in most states on the grounds that it stifles trade and commerce and breeds corruption. An alternative source of revenue with the same kind of elasticity and buoyancy is yet to be identified. The replacement of octroi has taken the form of ad-hoc grants-in-aid, which have proved to be neither as flexible nor as sufficient. The other significant source of revenue for local authorities property tax -is also ridden with problems. Resource mobilisation from this tax depends upon coverage of the base, periodic reviews of assessments, a rational rate structure, and effective machinery for tax collection. Because of several constraints, none of these instruments have been effective. Property tax was done away with by the Madhya Pradesh government a few years ago but was restored following an uproar.

Grants and shared taxes are the major non-tax sources of revenue for urban local bodies. These are, however, ad-hoc and dependent upon the whims of state governments. The amount of shared taxes given to municipalities has rarely, if ever, increased commensurate with the increase in the proceeds from such taxes. In such circumstances, it is impossible for municipalities to discharge their functions efficiently and effectively.


As local bodies are dependent upon the whims of state governments, legal reforms are essential to ensure the effective- ness of municipalities. The initiative has come in the form of twin amendments -the 73rd and 74th -to the Constitution. This is the first attempt to provide "constitutional legitimacy" to local self-government institutions in both rural and urban areas. The 74th Amendment deals with democratic decentralisation in urban areas and devolution of power to urban local governments.

The significant aspects of the Amendment include the mandatory constitution of municipalities in all urban areas according to a prescribed composition. This seeks to ensure, among other things, representation of all sections of society and a specific duration of municipalities. The Amendment includes a directive that elections be conducted before the term of the municipal body expires, and that, in case of supercession, elections be held within a period of six months. These provisions seek to reduce the control state governments exercise over municipalities and make them autonomous to an extent.

The Amendment provides for the establishment and operation of the state finance commission (SFC) in order to change the arbitrary nature of the state government's fiscal relationship with municipal authorities. The SFC's functions include determining the criteria that should govern the distribution of net proceeds of various taxes, duties and levies between municipalities and the state government; determination of taxes, duties, tolls and fees that may be assigned to, or appropriated by, municipalities; and outlining the measures required to improve the general financial position of municipalities.

The Amendment is especially relevant in the context of urban planning and development. The Twelfth Schedule lists the functions that may be assigned to municipalities. It includes urban planning (along with town planning), planning for economic and social development, public health, sanitation, conservancy and solid waste management, slum improvement and upgradation, protection of the environment and promotion of ecological aspects. The mandatory provisions regarding the constitution of the district and metropolitan planning committees, for the first time, acknowledge the need for integrated development plan preparation, including spatial planning, development of infrastructure and environmental conservation. Control over all aspects of urban planning and management is vested with the local authorities.


While the Amendment is an important first step, it is not really the giant leap for people's involvement in planning and decision-making that all the hype would have us believe. There are a number of lacunae. The Twelfth Schedule, for instance, is hot a mandatory provision. The functions enumerated in the schedule mayor may not be transferred to local authorities, since it is at the discretion of state governments.


It has been emphasised time and again in national and inter- national debates that sustainable development can only be achieved through public participation at all stages -planning or decision-making, resource mobilisation, as well as implementation and management. NGOs and local community groups are often trusted much more than government agencies primarily because they usually advocate simple but practicable solutions to the problems faced by the community and that involve local people in all aspects of a project.

Again, with the financial, organisational and management capacities of municipalities grossly overstrained in most urban centres, public-private partnership in the provision of urban services and infrastructure seems a desirable option. In the post-liberalisation scenario, the private sector's role in infrastructure development and delivery of urban services such as housing, water supply, sanitation, solid-waste management, transportation and electricity cannot be under- mined, particularly as more and more people are expressing a willingness to pay for quality service. It is evident, therefore, that isolated attempts at strengthening different factors will not yield the desired results. What is required is an integrated approach and co-ordination among municipal bodies, NGOs and local people's groups, and the private sector-pooling of their administrative powers, technical expertise and financial resources, to achieve the broader goals of socio-economic development of our urban community.

Shipra Narang is a freelance journalist