Will climate change bring back the age of famines in Kashmir?

With changes in rainfall patterns, farmers face dual threats from flooding and drought. Both extremes can destroy food crops. Flooding washes away fertile topsoil that farmers depend on for productivity, while droughts dry it out, making it more easily blown or washed away. Higher temperatures increase crops’ water needs, making them even more vulnerable during dry periods.

Wheat, maize and rice crops grown in about 250,000 hectares, 210,000 hectares and 110,000 hectares respectively are the major cereal crops of Jammu and Kashmir (J&K) division. Basmati rice and rajmash (pulses) are valuable cash crops of the Jammu region.

Food production is very dependant on changes in local climate. A year of not enough or too much rainfall, a hot spell or a cold snap at the wrong time, extremes such as like flooding and storms, can have a significant effect on local crop yields and livestock production.

Agriculture and its allied sectors are the mainstay of Jammu and Kashmir’s economy, providing livelihood opportunities to 70 per cent of its population and contributing to around 27 per cent to its income.

In India, agricultural risks are triggered by a variety of factors, like climatic variability / change, extreme weather events, crop management practices and soil fertility status etc, which ultimately lead to uncertainties in yields and prices of the grain.

Climate Change is on the way

J&K has surpassed the world average in temperature rise (for the last 100 years). As against the global increase of 0.8 to 0.9, the state has recorded a 1.2 degree Celsius rise in temperature. Seasonal air temperatures also show a rise in all seasons, which, according to experts, is a cause of concern.

The annual rainfall in the Himalayan region is likely to vary between 1268±225.2 and 1604±175.2 mm in the 2030s. Kashmir Valley-based environmentalists / agriculturalists believe that an abnormal rise in temperatures in particular can prove drastic for some of our native plants, increasing their sterility and hence lowering the overall production.

Changes in climatic conditions are causing expansion of the normal range of pests leading to occurrence of more diseases in crops and ultimately resulting in the decreasing production of food crops.

In the last few years, because of climate change, there has been a dismal production of paddy every year, and farmers of many areas of the valley are adopting horticulture.

As a matter of fact, Kashmir, which used to produce sufficient agriculture produce like rice or wheat, is now meagrely producing these cereals and if the change of climate continues at the same pace, Kashmir will very soon be importing every bit of the food, which the people of Kashmir will consume from the neighbouring states.

The Food and Agriculture Organization of the United Nations (FAO) stated in 2016 that climate change is increasingly affecting nearly 80 per cent of the world’s poor who depend on agriculture for their livelihood.

The Jammu and Kashmir State Action Plan on Climate Change, a report prepared by the Climate Change Cell of the state government, has also warned that Kashmir is “heading for a peculiar climatic scenario with the net temperature going up”.

Climate change has disproportionately affected the production of the top crops in J&K. According to the Directorate of Economics and Statistics, Government of Jammu and Kashmir’s Annual publication 2013-14, the output of rice, maize, wheat, barley, pulses and oilseeds has already started to dip in half. The deficit in production in the Kashmir division is mainly due to geographical and climatic conditions as most of the area is mono-cropped.

Foodgrain production in the state has more than trebled, since the year 1950-51, when the production was 4.53 lakh million tonnes. Despite such significant strides, the state still imports about 40 per cent and 20 per cent of its requirements of food grains and vegetables, respectively.

Saffron production in the state has a historical background and J&K is the only state in India to produce saffron for commercial purposes. Saffron production has decreased during the past two decades due to global climatic changes. 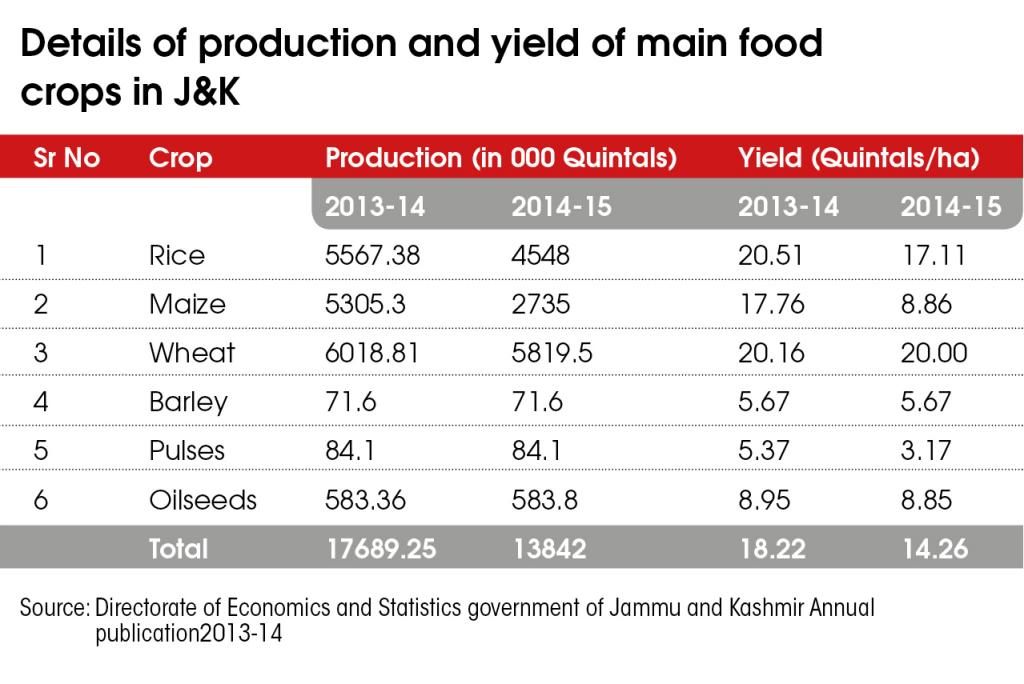 The above table states that the production for rice, maize, wheat, pulses, fodder, oilseeds, potato and barley, which are the main crops, has decreased unequally.

There is a real danger of loss of food security of more than 4 million people dwelling in the vulnerable karewa  (table land) areas and enclaves like Uri, Gurez, Karnah, Drass, Leh and Kishtwar and Doda areas in case of failure of fruits and food grains.

It is concluded from the foregoing facts that the future climate and its impact could well trigger bloody wars fought over access to basic necessities like drinking water and food grains.

Looking at the present situation in Jammu and Kashmir, the figures in terms of production, area and yield rate are not satisfactory as the gap between deficit and requirement is increasing at an increasing rate which has gone up to 81 per cent against the current population growth.

The major causes of the decline of the top food grains in J&K are: land use changes, global warming, climate change / variability, reduced availability of water for irrigation affected by erratic rainfall, loss of soil moisture, degraded soil health, extreme drought events and shifts in the rainfall regime resulting into failure of crop germination and fruit set.

Climate refugees would face hostility from local residents and this could lead to conflict. Large scale migration and competition for food resources could become a serious security challenge. Climate change has made it clear that this change is happening largely because of human activity.

Certain measures are required to be taken to overcome this problem which include creation of laws; desilting, growing of pulses, millets and adoption of agroforestry.

The changing climate will create havoc in future if the same trend continues. With increasing water crisis, population explosion and climate change, the import of grains is going to be an uphill task in future and will further widen the already stressed fiscal deficit.

Dozens of colonies are coming up on agricultural land in different parts of the state. The law enforcement agencies, climate change groups need to curb the menace before the problem assumes horrendous proportions.

*Disclaimer: This piece was written before the August 5, 2019 decision by the Government of India to end statehood for Jammu and Kashmir