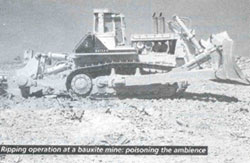 THE process of aluminium extraction from its ore, bauxite, is highly polluting, the reason being the large quantity of power and chemicals consumed.

The requirements for producing 1 tonne of primary metal include about 16 Mwh of electric power, 5.5 t bauxite, 1.3 t coal, 0.6 t anode carbon, 0.25 t fuel oil, 0.2 t caustic soda and 0.1 t of fluoride salts. Of the above materials, only 1 t of aluminium appears as finished product, and the rest -- solids, liquids and gases -- constitute the toxic effluent.

The world production of primary aluminium ranges between 16 to 18 million tonnes per year and expected to grow beyond 20 million tonnes by the turn of the century.

Notably, bauxite reserves the world over are found to occur predominantly in the underdeveloped and developing countries, while the production capabilities and large scale capacities are mostly in the hands of 6 multinationals -- Alcoa, Alcan, Pachiney, Kaiser, Alusuisse and Reynolds.

Since the developing countries such as Brazil, China and India, have the bauxite resource, cheap humanpower and lack of sufficient awareness about the long-term impact of pollution, the multinational producers of aluminium found it convenient to install bauxite refinery and smelter in close vicinity of bauxite mines.

Because the aluminium smelters consume large quantity of electric power, and in order to avoid transmission losses of expensive electricity, it is essential to have a captive power plant which calls for disposal of coal ash and gaseous effluents generated by it. Also, due to the gradual depletion of good quality bauxite, the metal to gangue ratio is increasing, causing additional burden of effluent disposal.

Thus, the impact of localisation of primary aluminium industries in an area of bauxite deposits is invariably going to pose an enormous threat to the surroundings in particular, and to the environment at large.

During the past 2 decades, a lot of work has been carried out to protect the natural environs from harmful effects of industrial effluents especially after the "United Nations Conference on the human environment" convened in Stockholm in June 1972.

In the aluminium industry, significant endeavours have been made to reduce pollution. These include restrictions imposed on indiscriminate discharge of effluents into rivers or ponds, impoundment of toxic waste in confined tanks, installation of electrostatic-precipitators in thermal power plants and calciners and construction of coal ash dykes.

Among the effluents from a bauxite plant, the largest and most toxic is red mud -- for every tonne of alumina produced, 1.2 tonnes red mud is generated. This effluent has to be stored in isolated tanks for long periods of time. Further, the land locked in storage of red-mud is bound to become barren. The added social responsibility of abandoned ponds is naturally a matter of great concern for both the producers of aluminium and the civil authorities. The situation becomes more serious where large capacity refineries are installed.

The aluminium producers eventually realised the high cost of extended storage of red mud in tanks and the continuing risk of contamination of ground and surface water. Accordingly, many research projects were undertaken to develop safe and economic disposal system of red mud. Among the alternatives suggested were disposal of red mud in sea water, dry stacking, brick and cement making. However, till date, none of these proposals could be implemented with much success and the brimming red mud ponds can still be seen near bauxite refineries.

The only solution to check the growth of the red mud ponds around the alumina refineries lies in the fact that the "red mud should be considered as a raw material for a secondary industry."

The valuable ingredients of red mud include titanium dioxide, aluminium oxide, ferric oxide, sodium oxide and calcium oxide, which should be recovered. For this purpose, a caustic chlorine plant should be installed in the vicinity of an alumina plant.

The cost of recovery need not be compared with the cost of production of above chemical components from natural minerals. It should instead be compared to the cost associated with the risk of the toxic waste for generations to come, not to mention cost of the priceless land destroyed for ever.

---Pradeep K Maitra is an aluminium technologist and has been associated with the Bharat Aluminium Company for over 2 decades.