Amidst the El Niño buzz, Pacific Ocean cools down

While the world awaits El Niño, the 'Little Boy' has played a mischief which has led to a delay in its arrival

While the world awaits El Niño, the 'Little Boy' has played a mischief which has led to a delay in its arrival

Its going all “out of sync” in the Pacific Ocean as the signs of El Niño shaping up in its waters have faded. El Niño, meaning “The Little Boy” in Spanish (a reference to Christ Child) has been in the news for mostly wrong reasons since the summer of 2014. Known for adversely affecting the monsoon in India (not always, though) and weather across many nations, El Niño has been of a great concern for the meteorologists across the globe, especially due to the way things have been shaping up this year, which has been anticipated as an El Niño year, when compared with the previous El Niño years.

The El Niño Southern Oscillation (ENSO) is a large scale coupling between the waters of the Pacific Ocean (mainly around the equator) and the troposphere (lowest part of atmosphere) over this region which exists in three phases—El Niño, La Niña and ENSO Neutral. Let's not talk about La Niña and ENSO Neutral and understand quickly how El Niño shapes up in the Pacific so that it will be clear what's going wrong this year. 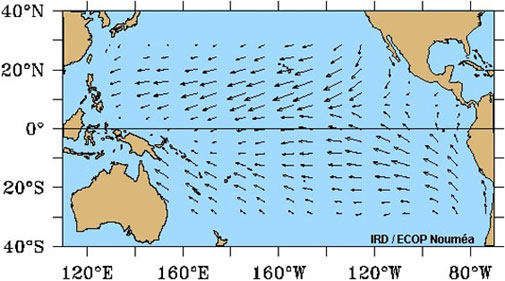 Under normal conditions, winds (called trade winds) near the surface blow from the South American coast towards countries like Indonesia/Australia as shown by the black arrows. (Keep this in mind-east is towards the right side and west is towards the left in the image). This happens as there is a high pressure region near South America and a low pressure near Indonesia (to balance the pressure gradient, winds blow from high to low pressure area). Additionally, these winds dominate the movement of the Pacific Ocean waters, creating an equatorial current which travels westward. During daytime, the sun keeps on heating the waters in these areas but as the surface water travels westward due to the winds and the current, warm water in the upper levels of the ocean also travels westward towards Indonesia. This can be visualised in a desert where the blowing wind transports the sand with it and piles it up on one side creating sand dunes. The same thing happens in this case: warm waters get piled up near Indonesia due to which the sea level rises in Western Pacific as compared to the eastern part and the sea surface is around half metre higher near Indonesia than Ecuador in South America. Naturally, if the warm surface water near South America moves westward, cold water from below will rise to replace the warm water. 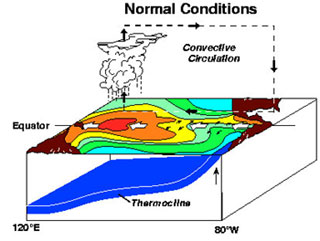 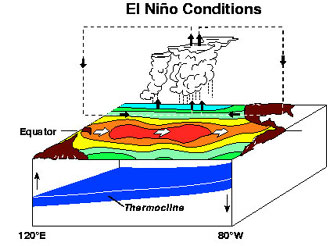 El Niño scenario
This is normal, but what if in the same desert the blowing wind becomes weak or stops or reverses in direction? In this case, it will not transport that much sand and the same happens in the Pacific Ocean. It's still a mystery why these westward blowing trade winds weaken or reverse at times in the central and western parts of the Pacific Ocean. As it happens, the warm water is no longer pushed westwards (towards Indonesia), it spreads in the central and eastern part and hence the sea surface temperature (SST) rises in the equatorial Pacific Ocean and triggers positive anomalies. As it does, the region of rains and thunderstorms also shift towards the centre of the ocean from Indonesia, leading to dry conditions in western Pacific Ocean.

Sea surface temperatures are constantly monitored in the Pacific Ocean through various devices. To eliminate the noise in the data (SST varies weekly and so do their graphs; that tremendous variation in the data is the noise) their (SST anomaly) averages are taken over three months period in four regions as can be seen in the above figure. This is like MAM (March April May) or JJA (June July August) period .The Niño 3.4 region (situated at 5°N-5°S, 120°-170°W) is very important as it's the one whose SST anomaly (difference between the observed value and the average value) will reveal if ENSO is in El Niño or La Niña or Neutral phase.

As per the definition, a full blown El Niño may be declared if these three months' averages exceed (or equal) the threshold value of 0.5°C five times in succession. As an example, if MJJ (May June July) 2014 reports the first 0.5°C+, the fifth period would be SON (September October November) and an El Niño may be declared, at the year end in December in this case. But hold on, there is a twist! It's not just the SST anomaly that has to be in the right range but the trade winds should also indicate that they have intensified in the western pacific ocean and/or are blowing towards the east and the rainfall has shifted away from Indonesia. If all these conditions come together, then only we will say “The Little Child” is born. 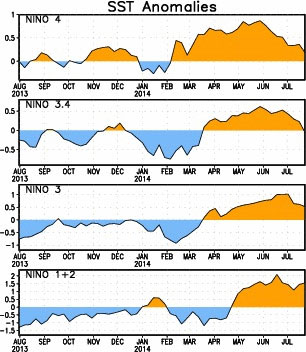 The sea surface warming trends (orange regions) started emerging after mid-March in the Niño 3.4 region and the SST anomaly touched 0.5°C around mid-May and continued to rise further. A good news (which perhaps triggered these warming trends) also came up in February-March that strong eastwards blowing winds have been observed near the surface in the western Pacific Ocean (near Indonesia) just like we have for an ideal El Niño. In the same mid-February to mid-March period, even the precipitation decreased in Indonesia and increased near the Central Pacific Ocean and with the probabilistic models predicting good chance of El Niño later, the buzz started. 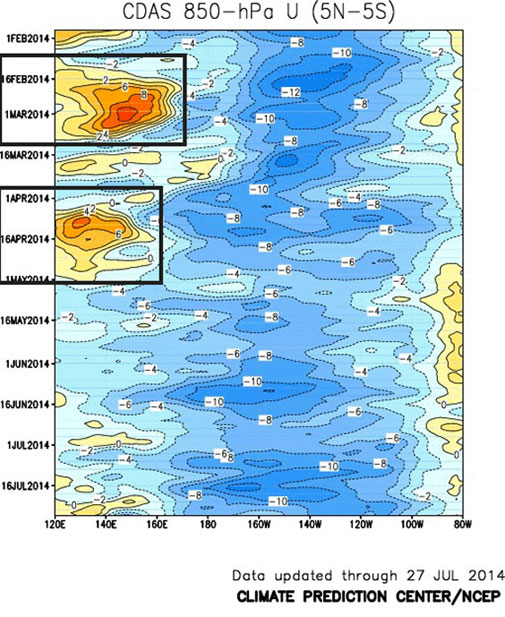 What went wrong then? 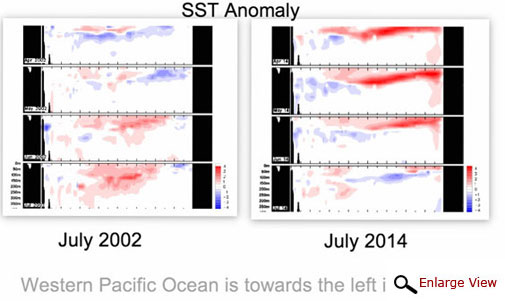 Cooling started in the Pacific Ocean after that and became distinct in July 2014 (excluding the Niño 1+2 region). The SST anomaly in an anticipated El Niño year would be like the 2002 case as can be seen in the above image. Red indicates warming of the sea surface of Pacific Ocean whereas blue represents cooling. In 2002, warming of sea surface became distinct around June (see the red region near the centre of image) and it continued to rise later and spread in depths and later turning into moderate El Niño. In 2014, the heating of sea surface of Pacific started early (around March) and became distinct in the eastern pacific (see the bright,wide red patch). It didn’t go that deep below the sea surface like in July 2002 and has faded now because of the trade winds continue to be normal and pile the warm water towards Indonesia.
See this link to see the warm water moving from Indonesia towards South America in early 2014- A Kelvin Wave!

This is what “out of sync” means. The sea surface of Pacific and the atmosphere aren’t responding to each other.

What could happen now
The official SST anomaly for MJJ (May-June-July) will be out soon. The AMJ (April May June) SST anomaly for Niño 3.4 was 0.2°C. If we assume that MJJ SST anomaly will touch 0.5°C (which is unlikely) and sustains ahead, so the fifth period (as per the El Niño definition) will be September-October-November and El Niño arrival will be declared in December 2014. So December is the minimum period when a full grown El Niño can be seen. But SST anomaly in May was 0.23°C, in June was 0.46°C and expected to be around 0.2°C in July; so the average for MJJ would come out to be around 0.3°C. Hence this MJJ period also will be discarded (because the figure doesn’t touch 0.5°C). So the announcement of El Niño formation can’t be before January 2015.

Nevertheless, dynamic models do suggest that chance of El Niño forming in the 2014 summer of Northern Hemisphere is 70 per cent which rises to 80 per cent during the fall and winter of 2014. This is a good news for the Indian summer monsoon which is at the middle stage of its tenure now. It can take as much as one month for the Pacific Ocean to get back in sync as there are some signs that the things are improving slowly now. Hence the monsoon is less likely to be more affected now. "Even if the announcement of El Niño comes in Jan 2015, the effects may emerge from the Northern Hemisphere's autumn of 2014"

All India rainfall departure during June 1 to July 31 has been -22 per cent and still 19 out of 36 meteorological subdivisions are experiencing deficient rainfall.