An identity crisis for the South

The developing world needs to define what the South represents, for otherwise it risks its legitimacy as a negotiating bloc 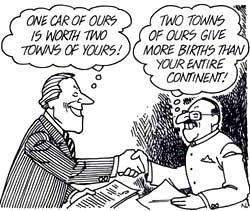 EVENTS leading to the 1992 Earth Summit, then to the Commission on Sustainable Development and to the UN Conference on Population and Development in 1994 have reinvigorated the South as an important bloc in international negotiations. After its heyday during movement in the 1970s for a new international economic order, the South -- represented by the Group of 77 (G-77) and the non-aligned movement -- found itself embroiled in internal disarray and disillusionment, leading to external disrepute and inactivity.

While the disarray persists and the disillusionment lingers, recent geo-political shifts and growing calls for a new international environmental order have presented the South with a new opportunity to make its presence and demands felt internationally. However, like all opportunities, this one, too, is accompanied by threats and questions, the most important being the question of definition.

Despite their pervasive use, the terms "North" and "South" are seldom defined. The 1980 Brandt Commission report noted neither is a "uniform or permanent grouping," and described them generally as synonymous with "rich" and "poor", "developed and developing". Similarly, the 1990 South Commission report uses "South" in lieu of "Third World", as an operational definition for all the G-77 nations plus China. Ideologically, North-South is seen not only as a "developing-developed" distinction, but a "dependence-domination" divide. Its functional identity was best summed in former Tanzanian President Julius Nyerere's description of G-77 as the "trade union of the poor".
However, as the South enters this new phase of international presence, its self-definition -- or rather, its lack of any concreteness -- is vulnerable on at least two fronts.

First, the utter lack of homogeneity within the South. Consider G-77 that includes more than 120 states ranging from massive India to tiny Maldives, from rich South Korea to starving Somalia and from conservative Saudi Arabia to communist Cuba. It is a minor miracle that the South has acted as a united negotiating bloc for a quarter of a century.

The issue of homogeneity, however, is easier to answer. To begin with, G-77 has never claimed, or even desired, homogeneity. It has sought its unity in spite of intrinsic differences in ideology, demography, geography and GNP. For example, Jamaican President Michael Manley acknowledges "the great complexity of the social, political and economic" differences within the South, but defines their commonalty as the "underlying and binding cement to be found in their common experience of imperialism and colonialism, together with the common disadvantage they suffer under the present world economic order."

Similarly, the Brandt Report concluded that "the South's solidarity in global negotiations stems from the awareness of being dependent on the North -- and unequal with it".

This lack of homogeneity is not a new phenomenon for the South. Today's economic differences between Singapore and Mozambique are only marginally more stark than those between Kuwait and Mali in the early 1970s. Arguably, it is the richer fringe within the South (OPEC in the 1970s) that is best placed to provide it with credible leadership, as they, unlike the more dependent states, can "stand up to the Northern bullies". China and India, though not necessarily "rich" in strictly GDP terms, gain much of their leadership legitimacy from the strength of their population. Furthermore, with the newfound global fascination for the so-called "free market", ideological differences within the South are conceivably less tense today than ever before.

This brings up the more difficult problem of the countries of the erstwhile Soviet bloc. While these states do not share the history of direct colonial exploitation that initially brought the countries of the South together, Moscow's shadow could be counted as a neo-colonialistic experience parallel to the South's experience under the shadow of the White House.

Yet, in contrast to the principle of inclusiveness that the South seems to adopt in retaining the newly rich within its ranks, it is invoking the principle of exclusivity to keep out the newly poor. The South's fears of the old South are understandable for already much of the aid once directed towards it, is being diverted to eastern Europe.

The South's leaders and intellectuals have been essentially hedging on the issue of definition. By refusing to consider the question and hiding behind the "constructive ambiguity" of a noncommittal position, they risk their own legitimacy as a negotiating bloc. The case for an explicit redefinition is compelling, even if it amounts in the end to merely repeating the arguments for maintaining the prevailing operational definition -- "South = G-77 + China". Adil Najam is a Pakistani environmentalist currently working with the technology and policy programme at the Massachusetts Institute of Technology.