ANNA TO BINAYAK AND TATA 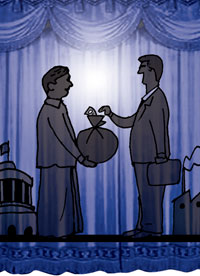 HOW does one make sense of the momentous—and farcical—events of recent days? Two different story lines have been holding centre stage, plots that are clearly intertwined and yet seem to be unfolding as separate narratives.

The first is the extraordinary campaign of a former army havildar who attracts filmstars, TV channels and a gaggle of the middle class, primarily the Twitter crowd, to back his fast-unto-death against corruption. For some reason they are drawn to Anna Hazare, a man they would not have heard of till he appeared in his spotless white khadi at Jantar Mantar. Yet, the moral and environmental crusader of Ralegan Siddhi, a village in Maharashtra’s Ahmadnagar district, becomes the icon of a popular movement that wants the dirty politician and the slimy bureaucrat to be made responsible for the pervasive corruption in the country. The solution that Hazare brings is the Jan Lokpal Bill, a piece of legislation that can create a monster ombudsman with unlimited powers. Hazare is a simple man and his solutions for his single-point agenda of ending corruption are simplistic, as simplistic as the calendar art representation of his nationalism that offends his secular supporters.

The farce, of course, is the campaign launched by the government to discredit members of the Lokpal Bill drafting committee. The less said about the antics of Congress stalwart Digvijay Singh to undermine the committee the better. In a party that enjoys less democracy than some Central American states, it requires little political acumen to understand who Singh works for.

The other story is the 2G spectrum scandal which involves some top names in the telecom sector. It is a case which calls for a clearer understanding of how the industry-politician links work in India. A steady line of top telecom executives has been heading for Delhi’s Tihar Jail, with the courts refusing bail in a case that is estimated to have involved giveaways of over Rs 1,76,00,000 crore to select companies (Report of the Comptroller and Auditor General of India). The man who made this possible, Telecom Minister Andimuthu Raja is in jail despite the generous certificate that India’s most powerful industrialist Ratan Tata has given him.

In a letter written to Raja’s party boss, M Karunanidhi of the DMK, in November 2007, Tata had said: “Ever since Mr Raja took over as minister there has been a rational, fair and action-oriented leadership in the ministry. On the issue of spectrum also, his stated policies, for most part, have been legally sound, rational and well-reasoned.” The praise is repeated when Tata says: “In all other cases, his stated policies appear fair and he deserves everyone’s support.” Really? That letter was personally delivered to Karunanidhi by Tata’s corporate lobbyist Niira Radia who is at the centre of the biggest case of malfeasance to have rocked India since the Bofors gun ricochet. Tata himself has appeared before the Public Accounts Committee of Parliament along with other beneficiaries of Raja’s largesse such as Anil Ambani of ADAG, the first time in India’s democratic history that leading members of Indian industry have been summoned to appear before it.

The Hazare phenomenon is an unwarranted distraction from the leaked Radia phone tap tapes. Nothing has revealed more sharply the overwhelming role of business even in political nominations to the Cabinet. Although there has been a powerful effort to stop further leaks in the name of violation of privacy—and the effort appears to have succeeded—Indians need to go over the Radia tapes carefully for several reasons.

First, to understand the role of the corporate sector in the policy formulations of government and how this aids the enormous loot of public resources by select companies. The 2G case is just one example; there are far too many cases where scarce natural resources have been allowed to be plundered legally. It would also help explain why those who criticise such policies are oppressed and sought to be silenced by the state. The case of the good doctor Binayak Sen who worked among the tribal people of Chhattisgarh comes to mind immediately. We know why he stayed in jail so long.

Most important, it is necessary to understand how “legal” the giveaways to the corporate sector have become as in the US. Those who wear Anna Hazare caps at Jantar Mantar and scream for an end to corruption need to know that this year’s budget wrote off a whopping Rs 88,263 crore in corporate income tax, a snowballing exercise that started in the first UPA government. So when you see two of the finance ministers who were responsible for these massive giveaways on the panel crafting the Lokpal Bill and yet others with close corporate links you know where the law is tending.