After a long time, significant cyclonic activity is possible in the Arabian Sea; people in Bhuj coast of Gujarat need to follow weather updates

After a long time, significant cyclonic activity is possible in the Arabian Sea; people in Bhuj coast of Gujarat need to follow weather updates

Almost two weeks have passed since the landfall of Tropical Cyclone Hudhud near Visakhapatnam, and now a new cyclone is likely to form. Not in Bay of Bengal but in Arabian Sea. Yes, you read it right, it is Arabian Sea! It also hosts tropical cyclones but the frequency of cyclones, including depressions or low pressure regions, in it are fewer compared to those that develop in Bay of Bengal. This year, in the month of June we had Tropical Storm Nanauk in Arabian Sea which had disrupted the onset of south-west monsoon but its peak intensity was around 85km/hr which placed it in the “tropical storm” category of extended Saffir Simpson Scale.

Present low pressure in Arabian Sea.
A low pressure area has formed in the Arabian Sea. According to IMD, it was located at around 12.5° N, 61.5°E which corresponds to about 1,400 km from Mumbai at 11.30 am IST on Saturday. According to US Naval Research Laboratory (NRL), the maximum sustained wind at the centre of this system on Saturday morning was around 30 knot (56km/hr) with air pressure of 1,000mb. This system along with a mid level trough (elongated low pressure at about 20,000 feet above the ground) running from this system towards Nepal generated a lot of clouding which covered entire Maharashtra, southern Gujarat, much of Madhya Pradesh, Chattisgarh, some parts of Uttar Pradesh, Nepal and Sikkim. As a result, maximum temperatures must have come down in these areas with rains (drizzle to light rains). 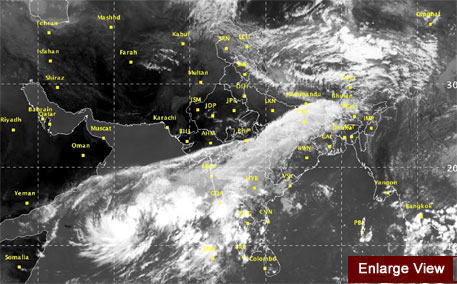 This low pressure system is finding it hard to organise itself due to the interference from the moderate vertical wind shear (which inhibits the development of a low pressure) in its vicinity. During Cyclone Hudhud, we saw how important the inhalation of warm, moist air from the base and its exhalation from the top level was for the development and intensification of the storm. For this system, this mid-level trough (as discussed above) is providing a nice exhalation FROM above and, hence, the system is surviving. The sea surface temperature in this part of Arabian Sea is about 29°C which is favourable.

Fight against the dry air
When instead of this moist air, nearby dry air starts filling any cyclone or such low pressure system, it literally “chokes” the engine of the system and it rapidly weakens. This was seen during Tropical Cyclone Lehar last year which weakened after pulling dry air from eastern India.

At this time of the year due to the monsoon withdrawal, moisture content in the northern parts of Arabian Sea is usually less (dry atmosphere). Latest “total precipitable water”, a parameter giving an idea of amount of moisture in the troposphere, indicates a lot of dry air to the north and west of the system and some amount of it is entering the system through its south-western end.

This animation will give an idea of how the dry air (shaded blue, purple, green) is entering the system from the western end. 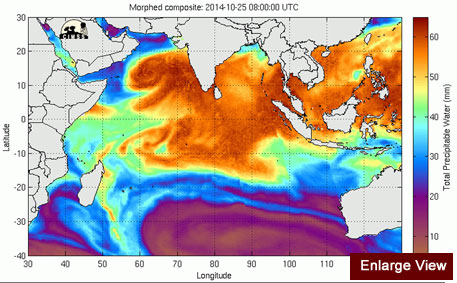 HWRF model forecasts a strong system
However, the latest update (00UT, October 25) of Hurricane Weather Research and Forecasting (HWRF) model shows that this system will intensify to a peak of 110-115 knot (one minute maximum sustained winds) by Wednesday, October 29. This should place this "Cyclone Nilofar" (meaning lotus) in the Category 3-4 of Saffir Simpson Scale. HWRF model has performed very well, especially during Cyclone Hudhud, but even it can’t precisely estimate the negative effects of dry air ingestion. 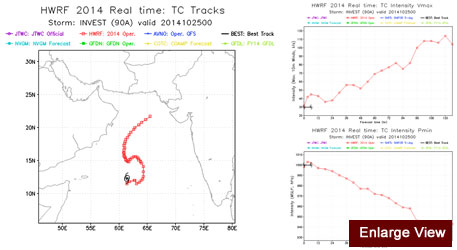 Hence, it’s very important to monitor the dry air over the next few days and I would say the intensification forecast entirely depends on it now. Also, previous versions of HWRF were showing persistence of moderate vertical wind shears, which may limit the intensification, and, hence, things have to be monitored now.

Where will the system head?
For any cyclone, there are three million-dollar questions. Where is it heading? How much will it intensify? Where will it hit?

The HWRF model, along with Global Forecast System (GFS), has been consistent to some extent about the path of this system. From its present position, it will head slightly north-east, then north-west and then follow a curve path—almost S shaped, as HWRF expects. This system, which should become a category 3 cyclone by that time, as per HWRF, will touch the coastal areas of Oman on Tuesday (October 29) and Wednesday (October 29), as per GFS. This will trigger heavy rains, strong winds, surges along the coast of Oman and rainfall in cities like Muscat also.

After this, the upper air winds (jet stream) will be driving the cyclone and will take it eastward, north-eastward, as per HWRF. In this last part of the journey, this system will likely weaken considerably as it will encounter high vertical wind shears. As a weak system it is likely to head towards the region between Karachi (Pakistan) and Bhuj (India) around Thursday-Friday (Oct 30-31).

The forecast of impact will become clearer with the availability of more data, including estimates from Joint Typhoon Warning Centre in the coming period.

People in northern half of Gujarat are advised to follow the weather updates.