Assam on a platter 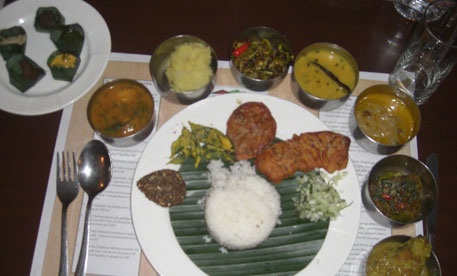 I have been hooked to Assamese food since school days when a friend took me to her home in Guwahati during vacation. For a perpetually hungry hosteller, the boiled rice paired with yellow lentil seasoned with hot mustard oil spluttered with a bay leaf, which my friend's mother rustled up along with a fish curry called dhangon mas, a small river fish, was the best meal I could have ever had after many half-cooked Maggi-eating sessions. The food was served with aloo pitika, a side dish made of mashed potato, garnished with chopped green chillies and coriander. To this day, I love aloo pitika and since it’s so easy to prepare, I make it frequently to spice up my meal. For dessert, we had home-made coconut ladoos and til pithas(made from sesame).

It was only much later, and after many trips to Assam, that I discovered the richness of Assamese cuisine. I also understood that, like other cuisines from the north-eastern states, the hallmark of Assamese cuisine is simplicity. It uses minimum oil and less masala (spices). Mustard oil is the preferred cooking medium. The food is healthy and emphasises the use of herbs like ginger, garlic, onion and coriander. The use of chillies depends on what is being prepared and who’s preparing it. For instance, in lower Assam, like in Barpeta district where there are more variety of greens, I am told, people have more appetite for chillies than people in any other part of Assam.

Flavours vary between regions
Fish apart, Assamese also love all types of green. This is evident as greens like khar which is a dish made of raw papaya or saag (mustard leaves) features in their daily meal. You will find a touch of vegetables even in their favourite fish curry, called masor tenga, is slightly sour because of the souring essence in the form of lime. The mutton curry called mangsho is quite like the Bengali meat preparation with sliced potato or sometimes cauliflower also thrown in. With rice as the staple diet, the Assamese have a rich repertoire of cuisine. Although cooking style and approach may vary from district to district. For instance, duck is a delicacy for people in Assam but the cooking style may vary from one place to another. Bodo food is slightly different. My only introduction to Bodo food was by Sansuma Khunggur Bwiswmuthiary, the sitting Bodo Member of Parliament who assisted me a great deal during my research for a book on Bodo food. With him as my sole resource, I got plenty of theoretical information but never once did he invite me for a meal to sample dishes like Sobai wangkhrai, chicken prepared with black beans. find To this day, my yearning for Bodo food remains unfulfilled.

An interesting thing about Assam is the variety of food one can have in different parts of the state. For instance, one of my most memorable meals was in Nagaon district, off Guwahati. I had stopped at a highway food joint and joined a long queue of people, an indication that the food is excellent. On a huge thali (plate) came different greens prepared differently. The lentils both black and yellow were flavour. The service was quick and efficient.

Recently, when I made a quiet solo trip to Kaziranga during an off season month with no particular interest to spot any wildlife, I got to try different dishes. After befriending a group of giggly tea-plucking ladies, I was finally invited to a village headman’s house one dark evening. It dawned on me then that Kaziranga National Park, an important World Heritage Site, had no electricity. While the villagers made do with candles, lanterns and petromax (a paraffin lamp powered by kerosene), the tourist resorts nearby switched on noisy generators. I seated myself on the floor of his mud and thatched roof house and felt quite at home due to the immense warmth of my host. The lady of the house who has been cooking through the evening came out smiling and placed a big steel thali in front of me. There was a heap of rice, chutney made of green chilies and dry fish, a lentil and duck curry. There was fried mustard leaf which had the purest flavour.

The next day in my resort which was set on a sprawling tea garden, the chef took upon himself to pamper me with his version of Assamese fare. It was here that I first tried batter fried curry leaves for the first time. To this day, this is an important recipe in my kitchen that I quickly prepare when I want something quick and tasty. I had Bahor sungat dia bahgaj aru kukur, a rather lengthy Assamese name for a dish of country chicken and bamboo shoot cooked in a bamboo sleeve over charcoal and served with rice, lentils, fried vegetables and pickle. The sour fish curry prepared with seasonal vegetables was again a delight.

Temple feast
But nothing compared to what I had at a village temple where I sat through a religious ceremony. An elderly pundit went about placing plantain leaves in front of everyone. Another priest came and placed a ripe banana on the leaf, which was followed by a slice of fresh coconut. The last item came in a bowl made from plantain leaf that was stapled together. The bowl contained assorted sprouts mixed with fresh grated coconut, finely chopped curry leaves and fresh ginger with a dash of lemon juice adding to the flavour. And salt to taste. It tasted refreshing and divine. This too has featured as an important appetizer in my home when guests droop in for a meal.