Agriculture, in fact, touched a terrible low between 1997 and 2008 with 182,936 farmers committing suicide--according to government records. The returns from agriculture are paltry in comparison to other vocations. Let us consider some figures. Between 1997 and 2007, salaries of government employees increased by over 150 per cent--we are not even looking at the hikes proposed by the sixth pay commission and the earnings of our mlas increased by 500 per cent, but the farmer could manage only a 25 per cent increase in the prices of his produce. Prices of non-agricultural commodities, meanwhile, shot up by 300-600 per cent. The prices of agricultural inputs went up by 400 per cent.

This disparity has struck the farmer hard. The Arjun Sengupta committee on the unorganized sector reckons that an average Indian farmer's monthly income is Rs 2,115 while his expenditure is Rs 2,770 every month.

Successive governments have tried to keep agricultural prices low to ensure cheap labour--the rationale being that cheap food will make labour cheap. But the farmer's bill on other inputs has gone spiralling. The minimum support prices do not ensure a fair return to the farmer who has to spend a fortune on hybrid seeds, GM crops and new generation pesticides. And in any case, the government announces msps for only 33 agricultural commodities and intervenes in market operations only for rice and wheat. So farmers growing other crops are left to the mercy of markets.

The National Commission on Farmers has stated the government should ensure farmers earn a "minimum net income", and also make sure that agricultural progress be measured by the increase in that income. It should appoint a statutory body--a Farmers Income Commission--to examine the real income of farmers every year across the state. 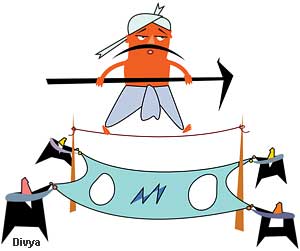 Today agricultural workers don't find employment and at the same time farmers cannot afford to pay for labour. The government should provide input subsidy in the form of labour wages (up to 100 days in a calendar year) to farmers to monetize family labour or to pay other farm labourers. This subsidy should include all agricultural operations from sowing to harvesting. It can be operationalized on similar lines as the National Rural Employment Guarantee Scheme, or by extending the scheme to agricultural work. This will also help agricultural workers.

The net income of farmers can be increased by promoting post-harvest operations at the village level. Agriculture-centered small scale industry can give the rural economy a boost

But these measures will only help partially. It is essential to provide direct cash payment to make up for the shortfall. All cultivators should be given fixed cash support to ensure them a fair living standard. This could be set at Rs 15,000 per family and revised every year by the commission.

G V Ramanjaneyulu is with Centre for Sustainable Agriculture, Hyderabad. He can be reached at gvramanjeyulu@gmail.com