A day-long event organised by Bangalore Metropolitan Transport Corporation to promote public transport in Bangalore, is now traditionally observed on the 4th of every month

A day-long event organised by Bangalore Metropolitan Transport Corporation to promote public transport in Bangalore, is now traditionally observed on the 4th of every month 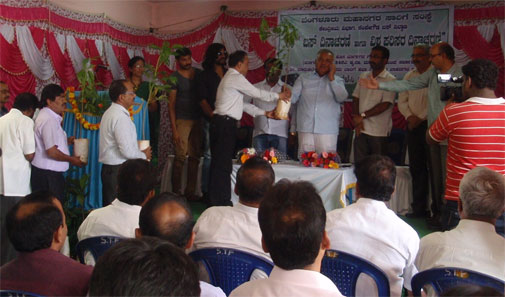 There was visibly less traffic on the roads and it was moving rather smoothly compared to other days. It was June 5 and Bangalore was observing its “Bus Day”.

On June 5, Bangalore Metropolitan Transport Corporation (BMTC) celebrated its 65th Bus Day along with World Environment Day. A public function was organised by BMTC to mark this day at one of its Traffic and Transit Management Centres (TTMC) at Kempegowda Bus Station, commonly known as Majestic Bus Station. BMTC and Karnataka State Road Transport Corporation (KSRTC) staff, along with a number of members of the public participated in the event. State Transport Minister Ramgalinga Reddy also took part and encouraged people to avoid their private vehicles and use public transport for their daily commuting. Renowned environmentalist Saalumarada Thimmakka, known for her work in planting and tending to banyan trees along a four-kilometre stretch on one of the state highways, was also honoured during the cerebrations.

“Bus Day” is a day-long event organised by Bangalore Metropolitan Transport Corporation to promote public transport in Bangalore. This is a social campaign where people are encouraged to use public transport for their daily commuting within the city.

The idea of Bus Day was initially conceived by a group of enthusiastic citizens of Bangalore. The idea behind this initiative was to change peoples’ perception towards public transport and ultimately help in improving the traffic congestion in the city and the health of its environment. The first Bus Day was observed on February 4, 2010 and since then, it has become a tradition to observe Bus Day usually on the 4th of every month.

Bus Day proved to have a positive impact in reducing vehicular pollution and congestion on roads. According to BMTC, on each Bus Day, the ridership increases by 10 per cent, with revenue statistics witnessing a positive rise. As there are less private vehicles on the roads on Bus Day, it has been also found that the vehicles’ speed also increases almost by 10 per cent. According to C G Anand, general manager BMTC, 400-500 new vehicles get registered in Bangalore every day and, today, more than 5 million vehicles are plying on the roads of the city, with an average speed of about 10 kmph only.

The Bus Day also proved to have significant impact in dropping pollution levels in the city. In 2011, KSPCB decided to assess the impact of Bus Day on ambient air quality by monitoring pollution levels at the junction of St. John’s Hospital at Koramangala, a burgeoning traffic spot, using a mobile laboratory before and during Bus Day. There was a significant drop in pollution levels during Bus Day. This monitoring was also unique in the sense that it was generated at a height of 1.5 m, which is considered as the breathing zone for Indians.