Beating the hell out of death 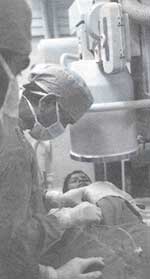 OVER the last few decades, the whirlwind of technology has changed the face of diagnosis, and medical treatment. 40 years ago, if a patient suffering from "effort angina" approached the physician, he would do a complete physical examination and after a series of tests, conclude that the patient is suffering from coronary artery disease. He could do little for treatment, apart from prescribing nitrates, advicing rest and reassuring the patient.

Today, the scene is beyond recognition. Recording history, and physical examination have faded into the background. Apart from a battery of biochemical tests, done by the autoanalyser,the patient will invariably undergo a stress cardiogram to uncover latent angina. The stress test will be preceeded by scanning the distribution of labelled thallium in the heart muscles. If the stress test is positive, and condition of the patient is favourable he will undergo coronary angiography. All these procedures can get over in a few days, and restore the patient to work in less than 2 months.

At every level of diagnosis and treatment, the prospects for the patient have been totally transformed. The most striking part of medical technology is that equipment, for the major part, entered the arena no earlier than approximately three decades ago. Some of these technologies were developed primarily for medical applications,and some came as byproducts of some other endeavour. For example, "ultrasound", which has given a tremendous boost to medical diagnosis, owes its origin to the second World War. The defence scientists could hardly have imagined that, the Sonar technology that dealt with submarines operating under water would be applied to scan the foetus floating in the amniotic fluid of the mother's womb!

Not all developments in medical technology were accidental. William Kouwenhoeven, an electrical engineer, with the Edison Electric in the US, discovered the current method of cardiac resuscitation. After his retirement, the company asked him to investigate the reason for their workers death, due to accidental electrocution. Kouwenhoeven soon confirmed that death occured due to electrical fibrillation of the heart. This he said, could be reversed by a counter shock, and lost no time in experimenting at the John Hopkins Hospital. When the deductions confirmed the initial findings, the method" closed heart massage" for resuscitation was born.

The West's contribution to medical technology has enormously improved the quality of health care,and was commercially viable as well. According to the 1994 edition of the 'US Industrial Outlook', published by the US Department of Commerce, computers and semiconductors, which were the fastest growing manufacturing sectors between 1973 and 1988, have paved the way for health care equipment industries for the 1987-1994 economic cycle. The universities, research institutions and industry traditionally enjoy a close working relationship which helps the whole procedure.

In India, one looks for linkages between industry and university science departments. Industrial houses spend little on research, preferring the security of manufacture under licence. The Government is negligent about health care, unless some terrible epidemic sweeps the country. In this highly unhealthy climate, why worry about technology development? Why can not we import whatever we need?

In a survey carried out by the Sree Chitra Tirunal Institute in Thiruvananthapuram in 1985, the demand for medical devices is estimated to reach 1000 crores by 2000 AD. In the changed conditions we have to act with wisdom and speed. The time is ripe for, Indian industry to set up a Bureau for Medical Technology, which will observe global trends, the nature of domestic demand, and assess the capacity of research laboratories in India. Collaborations with organisations abroad should also be productive. To invest in the creation and promotion of the Bureau will be an act of high prudence and vote for our self-confidence.

---M S Valiathan is the vice chancellor of Manipal Academy of Higher Education.