Before cars take over 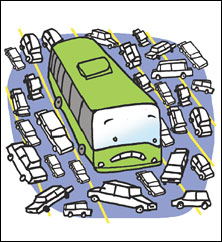 There I was, zipping down bustling Ahmedabad. The bus stopped at a station, designed so the doors of the bus and the station open simultaneously to let passengers out and in. People were walking to the station, buying tickets and waiting.

This is Ahmedabad’s brand new bus rapid transit (brt) system. The bus corridor is in the middle and is segregated—barricaded so buses can move without cars impeding them. Already, the system moves roughly 40,000 people each day over an 18-km stretch. More are being built. It’s working.

So why was there so much criticism when Delhi started its own brt corridor? As many rich and famous people in Delhi never stop reminding me, the brt corridor, in the middle, reserved for buses for some 5.6 km, is an unmitigated disaster. It has added to congestion of cars and all-round frustration. I have even heard the corridor has driven people to find alternative routes, adding to already strained roads. In all, a madcap idea, unsuited for Delhi, which needs to go away.

So what is the difference? Good vs bad planning and poor execution? I believe there is more.

Ahmedabad is building the corridor at the right time. Its roads are not choked with bumper-to-bumper emission-spitting traffic. (The city adds roughly 400-500 vehicles every day to its roads, half or less of what Delhi adds.) They can be filled up—but differently. With buses, not cars. The city is building new roads and flyovers only for the bus system. It can think differently about mobility.

But this is a small window of opportunity. Soon, the difference between Delhi and Ahmedabad will vanish. The city will blossom with progress and the consequent lack of choice: more and more private cars—bigger and bigger ones. The few buses will not be replaced but get driven off the mobility pathway. Congestion will slow them down and make them simply unreliable.

The cars will take over. Not to commute more people, but fill up all road space, even what is newly built. In Delhi, cars overrun all space, including pedestrian walkways, moving less than 15 per cent of all people. Removing them, re-making space, is tough. In Delhi the brt corridor literally came over the backs of cars. It meant taking from a few and giving to the many. That is why it was so contested, remains hated. brt is about equity on the road. It is a street-fight, literally.

The logic is clear. The bus moves more than 50 per cent of the city but does not get proportionate space. In the first stretch of the Delhi brt corridor, over this last year, buses have doubled to 3000—they now commute roughly 200,000 people each day. Most importantly, speeds have increased; 17 kmph in the middle lane in peak hours, as against 7 km in the rest of the corridor where the bus fights against the car. But what creates the problem is that, in this same period, cars have doubled—up to 60,000 a day on the corridor. But even such numbers, while clogging the road, commute less than half the people the buses do. Remember, most cars have one person and the driver doesn’t count. Be clear: Delhi has no other option. The city and its elite can continue to believe more roads, more flyovers—even double-decker ones—will make the horrendous snarl go away. Fantasy. Consider only the maths: just 10 per cent of Delhi moves by car, and roads are jammed up. Now add the 90 per cent that also needs the road space. They must all first get a vehicle, to zoom about. That’s the mantra. That means the city has to add 90 per cent more capacity to move people. Where and how? Do not think for a moment the metro will make the madness go away. Underground and overground, the metro is an important commuting spine, but it costs too much to extend across the vast city. It is necessary. But not sufficient. The bus has to be the answer.

In contrast, Ahmedabad has planned and built better—its system is integrated, high-tech, convenient and has conceived form and function for the future. There is work to do: It must now rebuild spaces for cycles and pedestrians and connect the bus to the home—provide the last mile connectivity. But the city must not be swayed by its homegrown critics (and there are many) who say this system is expensive or is just a beautification drive. It must keep thinking big and bigger. It must remember the ultimate challenge is we use the bus or the cycle today because we are poor. We must build our cities so we can bus or cycle when we are rich. Very rich.

All cities must rethink where they want to go: the Delhi way, where space must first be snatched away from the private car owner and then given to the public bus user, or the Ahmedabad way, where they plan today for a very different tomorrow. Rethink. And go the other way.