Gujjar form of protests are all the rage with people of Rajasthan, be they farmers or camel herders 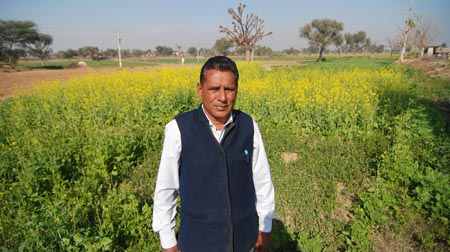 I found Deep Singh Shekhawat sitting on a pyol (low wall), enclosing the verandah of his home, thoughtfully writing something on a piece of paper. He was surrounded by a few men, all residents of Gothada village in Rajasthan's Jhunjhunu district. As soon as I introduced myself as a “reporter from Delhi”, he asked for two chairs, to seat me and my photographer colleague. Before I could start asking questions, he showed me some documents relating to the state government acquiring agricultural lands of farmers for building three cement plants in Nawalgarh teshil where Gothada is located.

Shekhawat, 56, who is the sarpanchpati of Gothada, is spearheading the campaign against the land acquisition by the state government. 6,000 people in 18 villages will be affected by it. While explaining the matter, he paused to order the women in the house to cook a “good lunch” for the “guests from Delhi”—reason enough for me to stay back. After discussing the details for some time, I got to know they were planning to intensify their protests as their agitation, on for the past 200 days, had cut no ice with the state government. “It seems now the only way to get the government's attention is to “go the Gujjar way’’, he said. “Peaceful protests like ours get no attention,” pitched in Srichand Singh Dudi, state general secretary of Rajasthan Bijli Kisan Union, another farmer leader of the area.

Hungry since morning, the smell of gatte ki sabzi (curry made using gram flour) simmering a few metres away on an open chulha made it difficult for me to concentrate. But soon the words “Yes, going the Gujjar way is the way forward now”, uttered by Dudi, brought my attention back to the acquisition and the protests. “How can they throw us out from our lands and homes without our consent?” asked another farmer.

Voices began to rise in anger. But they mellowed down as soon as the delicacies were served. Yumm..., I thought. Instructions from my science editor, Vibha, came rushing to my mind. She had asked me to find out about local recipes of Rajasthan for the food page she anchors in Down To Earth. Guaging the mood there, asking for a recipe did not seem like a good idea. Sorry Vibha, next time! I talked to other residents, met government officials, representatives of the cement companies and got ready to board the bus to Bikaner, the halt for my next story.

I was going to Bikaner report on the outbreak of a respiratory disorder among camels in Rajasthan. The morbidity rate was as high as 30-40 per cent. The outbreak was the first of its kind, as no such disease was reported in camels on such a large scale before. Being very robust animals, camels do not fall prey to diseases easily. It was the change in weather conditions which was affecting them. Rajasthan accounts for 60 per cent of the total camel population in India. I was looking for herders whose camels were affected by the disorder. Just in time, I read in a local newspaper that a camel fair was going on in Ladera village, 60 km from Bikaner, and it was the last day of the three-day fair. We headed for the village. As soon we got out of the taxi, we saw many herders with their camels. I started talking to them while my colleague was busy capturing camels in her frame. I saw many camels with nasal discharge, which in some cases had become purulent. I asked them if they got any help from the government. “Who are we? The government only listens to Gujjars,” said Ram Lal Jat of Akkhasar village in Bikaner. “Until you stop a train or two, the government does not listen to you, it seems,” said Ghiyasilal of Ramdeora village.

Surely, the Gujjars' rail roko aandolan has become popular in the state. And, a source of inspiration for some who treat it like a benchmark of protest! 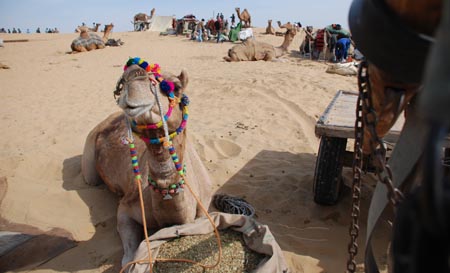