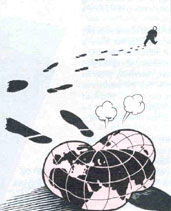 I the only one who remembers the Rio Summit? Am I the Only one who remembers all the noise that American NGOSI environmentalists and internationalists were making about George Bush dillydallying on whether or not to attend the b Sageek (though, in the end he did)? Am I the only one ogamiged that those same American friends, who had campaigned so hard to get Bush to Rio, were so totally silent about Clinton playing hookey at the Copenhagen Summit on Social development?

In fact I am not. An editorial In the Earth Times termed it a Real pity that Bill Clinton "isn't Going to Copenhagen" (March 5, 1995).I argue, however, that it is ditsene than just a "pity"that Was absented himself from end the sole remaining sadegel hegemon has decid- mum dw rest of the world; of how slogans of globalism are increasingly being drowned by the practice of parochasism.

The escuse my us friends, Lost of them Democrats, give for Clinton's absence in Copenhagen That domestic US politics did sliest him to. That is, his m pwing opponents might I his absence from home as bim. Friends try to convince me that Clinton was interested in the Copenhagen summit, unlike other orders like John Major of Great Britain, who also skipped off.

For Clinton, my friends argue, the domestic risk of atten- Dance outweighed the international gains of being there. So How's Clinton different from Bush in terms of political calcu of To put it bluntly, for Clinton, as for Bush, the short cdcalus of the next trial at the hustings was more impor bee the larger calculus of the earth's survival. Frankly, I wdiingsurprising with this. After all, they are politicians! I do find surprising is the way most of the same people loned Bush's attitude so appalling are excusing Clinton. is dangerously implicit in this line of reasoning is the aption the international politics willi 1)e affected more by lioppens in us's domestic amphitheatre than what transpires at a gathering of leaders from over 100 countries. Which is to say that Newt Gingrich's Contract with America is more important for the future of global unemployment, social integration and poverty than whatever happened at Copenhagen.

Such things are obviously never stated aloud. The fact is that the us internationalists are scared of Newt and want the world to follow them. Frankly, the world does not care - it has bigger problems to worry about. I do not for a single moment underestimate either the importance or the threat of the Newt phenomenon. For USA, I am sure, this new trend is critically important. All I am saying is that when we talk of global initiatives like the World Summit on Social Development, we are dealing with something bigger than Newt, and (much as some of you may be offended) something bigger than the us. We are dealing with a planet of 5.5 billion people which is fighting for its survival: we are confronted with billions of individuals who are losing their battles for survival every day.

Reducing this to the shortterm calculus of domestic electioneering - in USA or anywhere else - may well be the realpolitik way of doing things, but it is despicable all the same! Moreover, Clinton's lame excuse also implies that those who did attend the Summit, did not have equally urgent concerns at home. The Newt phenomenon is, after all, far less drastic a crisis than the separatist problems in India, the ethnic imbroglio in Pakistan, the currency crunch in Mexico, the war in Bosnia, or Russia being torn apart. Yet, the heads of states from all these countries showed up. They considered it important to make a statement by their presence: that Copenhagen was more important. Indeed, whether Bill Clinton was at Copenhagen or not would not have made life any easier for the millions of deprived, marginalised and oppressed souls in whose name the Summit was invoked.

Yet, in politics, symbolism counts. All that Clinton's being there would have said was that "USA cares." What his absence says to the rest of the world is, "We couldn't care less."

Pessimists and cynics in the South might rejoin, "We always knew that." But it hurts, nonetheless.