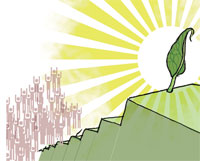 It was June of 1992. The location was Rio de Janeiro. The occasion was the world conference on environment and development. A large number of people had come out on the streets. They were protesting the arrival of George Bush senior, the then president of the US. Just before coming to the conference, Bush had visited a local shopping centre, urging people to buy more so that the increased consumption could rescue his country from financial crisis. Protesters were angered by his statement that “the American lifestyle is not negotiable”. People wanted change in the way the world did business with the environment. They demanded that Bush should sign the climate convention and agree to tough emission reductions. The mood was expectant, upbeat and pushy.

For the first time environmental issues were put on the world table. Till Rio 1992, environment was considered a local or national issue. But science and fears of a changing climate altered all that. Emission limits were needed for all industrialised countries. For this, global rules were essential and global cooperation imperative. The Rio conference saw the birth of global conventions on climate change, biodiversity and desertification.

Inevitably, Rio 1992 witnessed the first showdown between the North and the South on global rules for environmental management. Developing countries were firm they needed ecological space to grow. But they were also willing to say they should grow differently so that they do not add to pollution. They wanted money and technology to secure the new growth strategy. The big take home was that the environment was about socially equitable development.

Now 20 years later, world leaders will meet again in the same city of Rio de Janeiro. But this time there is no apparent excitement in the run up to the conference. It seems world leaders, lost in managing financial crisis, have no time for environmental issues. It seems the world has run out of ideas to safeguard a common future.

So, the conference is ridden with the usual polemics. The old rich, mostly European countries, are preaching the virtues of environment to the new rich, comprising India, China, Brazil and the rest. The new rich are resisting efforts to remove the differentiation in the contribution of different countries to the creation of the problem. They want their right to development secured. But now the old rich want to wriggle out of this differentiation. They want action from all. They are missionaries for the environment. The rest, they project, are renegades.

The question is what more can be done at the global level? The fact is that all global environmental problems—from climate change to hazardous waste—have separate agreements. International rules of engagement and cooperation are being discussed in parallel processes and institutions. So what can a conference like Rio achieve?

A new bogey was created: Rio+20 would be about green economy and not about the 1992’s concept of sustainable development. But this was said without clarifying what is true green economy? Does it mean the world will invest in technologies to green the current economy? Or will it seriously reinvent growth so that it is not driven by cheap consumption that is costing us the earth?

The question is too inconvenient, so, instead, negotiators drew up a list of actions to meet green targets called sustainable development goals. Thus the fight has shifted to a new goal. The European Union proposed a set of environmental targets—from renewable energy to forest and biodiversity. The G-77 proposed a counter set of development goals—from consumption patterns to poverty eradication. At Rio 2012, the fight will be about whose goal makes it to the priority list. Rio 2012 will most probably set up a process to negotiate the specifics of the sustainable development goals. The fight will be postponed for another day.

In all this nobody is asking why the world remains so deeply divided over the definition of environment. The fact is the world has changed since 1992. The fact also is that the developing world has by now seen the pain of environmental mismanagement. There is proactive national action. It is not as if countries like India must be converted to environmentalism. They understand the need for action. They are working to fix environmental problems. But they find that like much of the already rich world they remain behind the problem; they fix something, but much more gets out of control.

The bottom line is that environmental concern and action at the national and the local level has blossomed since 1992. But when countries meet at the global level distrust prevails. Environmental issues are divisive because the already rich have reneged on their commitments to secure growth for all. Now they want to start afresh to build a new world. But this is not the commitment that will give us back the earth.

The hard truth is that unless the world sorts out its deep divisions, global action will be weak and meaningless. So instead of focusing on things we cannot do, Rio 2012 should celebrate, loudly and boldly, that people (and nations) are not waiting for global consensus to emerge. They have taken matters in their hands. They are committed to change—change we can believe in.