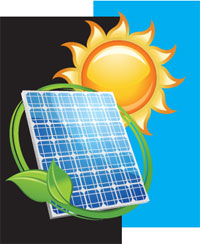 We were standing in the only street of this small village called Mohda. Located in the forested region of Chhattisgarh, the village had no access to the road and markets. The women of the village surrounded me. They wanted me to know that malaria was a serious problem for them. They wanted something to be done about it. I was taken aback because we were talking about solar energy—the state government had set up a small power station in the village, and we were there to learn more about it. “What’s the connection?” I asked. Pat came the answer, “Don’t you see that we need fans at night so that we can drive away the deadly pest?” We don’t often notice that electricity is one intervention in the fight against malaria.

“So, why don’t you get a fan—after all, you have a solar power plant in the village?” I asked. Now their anger spilled over. The solar plant provides electricity only for a few hours in the evening and that too enough to light only two bulbs, they explained. Officials were quick to rebut this claim, “All the people in the village have television sets. Many, in fact, have colour TV, which consumes more power. This trips the power plant, and we do not have enough to provide assured energy to all,” they said.

This clearly is not the way to go. The shift to clean solar power is a great opportunity for villages unconnected to the power grid. It brings energy, which in turn, is the starting point for literacy, communication and productive work. But currently, most distributed solar energy programmes are based on giving households a few photovoltaic (PV) panels and efficient light bulbs. This does not meet their aspirational needs. Solar, then, becomes the energy source for the poor, because they are poor. It will never provide the transition for millions living in darkness to power through a non-fossil trajectory.

Chhattisgarh has, in fact, done something different. It has set up solar mini grids in villages rather than provide PV panels to individual households. Under this programme the Chhattisgarh Renewable Energy Development Agency (CREDA) sets up an array of solar panels at one place and then distributes power to households through a mini-grid. Some 1,400 such systems are in remote villages not connected to the grid. To ensure that they run smoothly, CREDA has hired technicians. It is a pioneering scheme.

So, why the complaints? For one, the plants are small. Demand for energy was assessed 10 years ago; the capacity was based on the requirement of two light bulbs per family. In Mohda, a 4 kW plant was built to meet the lighting needs of 55 families. In neighbouring Rawan a 7 kW plant was planned for 130 CFL bulbs but now there are an additional 150 lights, 25 television sets and 100 mobile phones. This change suggests economic growth and should be welcomed, but officials see the higher use of electricity as “illegal” as the system is not built to provide for growth.

The fact is these systems can be upgraded. That is why mini grids are preferable. But then we need a financial model that can give the poor access to expensive power. At present, the state government pays the full cost of setting up and running the system. It does this by charging a small cess on every unit of grid-based electricity provided to consumers in the state. But while the government pays Rs 45 per household to the local operator to run the system, a household pays only Rs 5 per month, regardless of its consumption. Clearly, this makes the system self-limiting.

This is what happens in grid-based power, where costs are mammoth but get subsidised. The subsidy often hides the inefficiencies of the distributing utilities. This is also the reason governments cannot reach power to the people—the costs are not paid and so the system collapses. In the case of distributed renewable energy, there are no options but to fix this. The capital costs are not insignificant—everything from a power station to the distribution system has to be built. The advantage is that once the system is built, the recovery of electricity bills is easier because the user has a direct and close relationship with the supplier.

My colleagues are proposing two approaches to fix this. In places where the grid will never reach, the capital cost should be subsidised but the operation cost should be paid for based on consumption. This gives incentives to increase supply. In villages where the grid will reach (sooner or later), the cost of the system be paid through a feed-in-tariff, as is done in the case of large solar plants. In this case government pays the differential between the costs of setting up and running the system and the power rate recovered from people. Today the poor pay for energy needs—in these villages we found they spend between Rs 150 and Rs 200 for kerosene just for light. Paying the differential can ensure feasibility. What’s more, the system interacts with the grid. It can sell excess power or buy power and then supply it to the village.

In this way, energy generated in millions of villages can light the homes of millions and many more. This is the revolution we are waiting for.

Opportunities and challenges for solar minigrid development in rural India