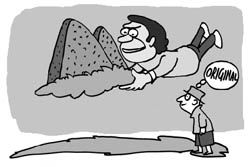 the Indian system of medicines can take a leaf out of the French experience when it comes to marketing their products. Geographically labelling the medicinal plants used in various preparations, which shows their source of origin, would translate into better business. Not only would it put a seal of genuineness but adulteration can also be prevented.

Currently, it is not compulsory, according to Indian law, to show source of origin of plants, whether collected or cultivated, when they are marketed. Confusion may arise as one can never be sure that what is supplied is, say, genuine Ashwaganda and not a Californian cousin, intrinsically different and economically a large-scale competitor.

With a rapidly growing domestic and world demand putting greater pressure on supply of medicinal plants, over-exploitation of natural resources, bad harvesting and destruction of habitat are bound to follow. Cultivation of medicinal plants may appear as a sound alternative to gathering in the wild if not the only way out. But for that region-specific plants must be grown and collected, providing they are recognised in the market.

This concept has been successfully put to practice in France for decades now. Since the 1920s, a policy of origin labelling of agricultural products, with a double goal of specificity recognition based on area, process, culture, and product differentiation has been benefiting small-scale producers.

The bargaining power
In the industrial world monopolistic bargaining power is commonly achieved through trademark. But this is not possible when the economy is small as in the case of the agriculture sector the world over. Here comes the advantage of geographically labelling products. Food or agricultural products with specific characteristics are linked to their area of production and this recognition of origin has been a way of branding the product. Origin labelling will then avoid usurpation of name.

The semi-arid mountains of southern France has been famous for its lavender over the centuries for its extensive use in aromatherapy. The essential oil produced from the flower is a vital ingredient in many cosmetics. The specifications of the label stress that oil must come out of Lavanda angustifolia P Miller, and seedlings must be of local origin. Local here means a strictly recognised area of production.

Same is the case with French wines. Ever since 1919, the label of the wines implies a strong link between product and the site of origin, the geographical name expresses the imprint of the lace, and therefore the specificity of the product. Unlike industrial standardisation, origin labelling is recognition of typicality; something unique to one particular region and which cannot be reproduced anywhere else.

The central plains of France have raised dairy cattle for centuries. The region, wet enough to be covered with meadows, is around a small town called Chaource. A particular cheese that is produced in this region is well known. People believe monks of a nearby monastery originally produced it. This home-made milk product is soft, sweet and slightly sour -- and is typical to the area of origin.

The labelling calls for process discipline and monitoring, once the tradition has been recognised. Then it allows supply control. The process of production must be environment friendly and should be healthy. For a number of products, benefiting from Certified Designation of Origin, yield quotas are compulsory: it is the case for lavender (25 kg per hectare); it is the case for the majority of French wines, and sometimes for milk production per cow.

Supply wise, experience shows that origin recognition for agricultural goods often built up at farmers' initiative, is not in contradiction with processing industry development. For instance, Champagne producers are commonly vineyard growers, but we have a good number of firms, rather large (and wealthy) processing and trading wine. It is also the case for cheese.

Doctrines of label
The first principle in area of designation is the location of origin. Second is the definition of product and process, identification of origin and official certification. In the case of lavender oil, not only the seedlings, even the fully grown plant must be of local origin. The use of seeds from clones is forbidden and the oil is processed by steam distillation. In the case of Chaource cheese, definition of product includes dairy process, maturation, dimension, consistence (firmness, thickness, density), look and taste (slightly sour). In some cases, the dairy farmers are required to respect such constraints as breeds, feeds, compounds.

Third principle is the allotment of rights to produce under designation. The final principle is the designation control. Once the item is produced, a final quality check is carried out for its sales. A sample of lavender oil, for example, selected in every farm is analysed in a laboratory agreed by the Public Authority.

The Certified Designation of Origin thus established, analogous to a trademark is inalienable. It is collective property under public law. It is intellectual property. The Public authority is necessary to prevent the risk of usurpation and to give guaranty that the product marketed under the denomination has the claimed characteristics. Necessary institutions have been built to define and protect the so-called designations.

The French set-up
Basically, the Origin designation policy in France came out of a producer's grassroots movement initiated in 1919 in the wine sector and has included other products in the later years. In the case of the Chaource cheese, the initiative came from a few small entrepreneurs and was recognised in 1970.

A certified designation of origin is a collective effort enhanced and watched by the producers through their union, which is financed by its members. For any set of product or area based on the origin, the producers union will propose designation, and control producers and products.

The origin labelling policy is in the hands of a particular agency called National Institute of Origin Designation, which includes representatives of producers and administration, and is publicly financed. An original feature of the French set-up is that experts, third party to both producers and administration, are called to be members of the various agreements committees.

We deal here with a bottom-up process, under public law, which became over the years a chapter of the French agricultural and rural policy. The regional development side of it is rather strong, in many cases origin labelling will concern area not only of product typicality but also of harsh natural and economical environment (mountains, dry lands, tiny farm scales and lack of industrial infrastructures).

It is quite clear that origin labelling, although analogous with a trademark, is based on physical criteria only. Once a product has been certified, it remains to be sold and producers have to face the market.

International recognition
The origin labelling system in France started a long time before any other European country. Italy started it for wines in the 1960's. The European Union adopted the French concept in 1992.

As far as international trade is concerned, the question is whether free competition, as the World Trade Organisation puts it, is respected under origin labelling. The answer is no. Are geographical designation non-tariff barriers ( ntb )? Some people think that the liberal dismantling of ntb 's works against local development policies, where origin labelling plays a major role, and finds its justification.

These contradictions lead to worldwide debates. In wto , geographical designation is accepted as an aspect of intellectual property; a chapter that has been written off in the trips agreement. France negotiated a number of bilateral agreements with some countries, about specific products, mainly wines, so that the Certified Designations of Origins would be recognised and accepted. And at the same were highly contentious with so many other countries about the geographical and generic usurpation. Some of its wine denominations are used in the usa as type of product and not as geographical origin; for example Champagne or Burgondy -- both are of regions and certified designations. But the us court accepted to stop the reference to Beaujolais, another wine of region specific following a case in 1997.

Origin labelling is aimed at product differentiation management, based on specific quality, to the benefit of small producers who are unable to support a trademark by themselves. Is there not some evidence that the Indian medicinal plant economy shares many of the features of the sectors benefiting, in France, of the origin labelling policy? n

The author is emeritus professor, National Institute of Agriculture in Paris and associate researcher, CIRAD/ECOPOL, Paris