Change of climate in the US

Climate change has a surprising new follower: the US president. The US government has been the biggest bugbear in climate change negotiations. Since discussions began on this issue in the early 1990s, the US has stymied all efforts for an effective and fair deal. It has blocked action by arguing that countries like China and India must first do more. Worse, successive governments have even denied that the threat from a changing climate is real, let alone urgent. President Barack Obama, who came to power in the first term with the promise of change in dealing with climate change, was noticeably coy about the issue in the recent years.

But in May this year, the US government released its National Climate Assessment, which puts together carefully peer reviewed scientific information on the impacts in the US. It makes clear that even the US is not immune to the dangers of climate change. In fact, many trends are visible and the country is already hurting. 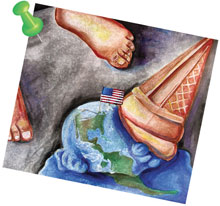 It is important to understand what this assessment concludes and why its findings are important for the rest of the world. One, it makes clear that temperature increase is now established. It is the highest in the poles where snow and ice cover has decreased. As the atmosphere warms, it holds more water, which leads to more precipitation. This is combined with the fact that incidences of extremes of heat and heavy precipitation are increasing—more heat and more rain. This makes for a deadly combination.

In the US, the number of heat waves has increased. In 2011 and 2012 the number of heat waves was almost triple the long-term average. The assessment also finds that in areas where precipitation has not gone down, droughts occur. The reason is that higher temperatures lead to increased rates of evaporation and loss of soil moisture. In Texas in 2011 and then again in large parts of the Midwest in 2012, prolonged periods of high temperatures led to severe droughts.

In addition, now it does not just rain, but pours. The heaviest rainfall events have become more frequent and the amount it rains on the heavy rainfall days has also increased. Already many parts of the country have seen flooding and the assessment is that these risks are significant in the future. This is combined with the fact that the intensity, frequency, duration as well as the number of strongest (category 4 and 5) storms and hurricanes have increased since the 1980s, the period during which high quality data is available.

So, the news is not good for even a rich and temperate country like the US. For long there has been an unwritten agreement that climate change will benefit such countries. They will become warmer, so crop-growing periods will increase, benefiting their economies. The National Climate Assessment makes it clear that even if specific regions benefit from climate change, this will not be sufficient or durable. The net result will be economic disruption and disaster.

The other welcome change in the report is its clear assertion—something that needed to be stated bluntly to the American people—that climate change is because of human activity. It cannot be dismissed anymore as natural weather variability. Not only has there been an unprecedented build-up in the atmosphere of greenhouse gases emitted from use of fossil fuel, but fingerprinting studies can now attribute observed climate change to particular causes. Even as the stratosphere—the higher atmospheric layer—is cooling, it is the earth’s surface and lower atmosphere that are warming. This is clearly because of increase in heat-trapping gases that come from fossil fuels countries burn to drive economic growth.

The message is clear: the time for complacency is over. The gases already in the atmosphere are at dangerous levels and hurting US economy. The effort has to be to adapt; to build flood- and drought-resistant agriculture and infrastructure. But all this will not add up to much unless emissions from fossil fuel use are cut fast and drastically.

But the question is what needs to be done? The country still does not have a plan to cut its emissions based on its contribution to the problem. Its stated voluntary target is to reduce emissions by 17 per cent over the 2005 levels. This is too little too late. It is, in fact, meaningless.

All this for another time. For the moment, we should accept that the elephant in the room has been acknowledged. This should lead to change.

Report: Remarks by US President Barack Obama on Climate Change (Speech on US Climate Plan)