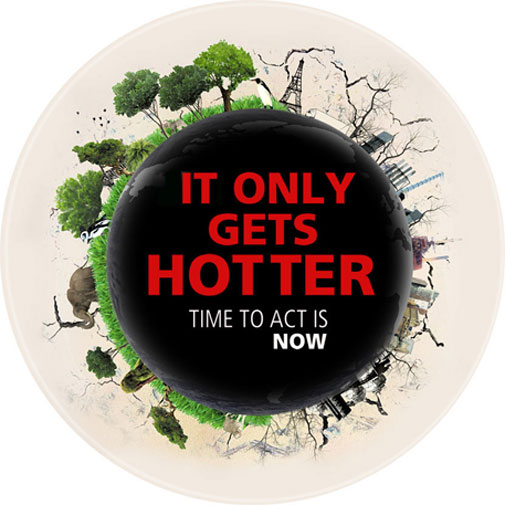 As world leaders converged in New York for the climate summit, the planet has continually been crossing rather grim milestones of climate change. These milestones are reminders of how climate change poses a threat to humanity.

Dipping carbon budget
The recent Intergovernmental Panel on Climate Change (IPCC) report has shown that to prevent a catastrophe, the global mean warming must not exceed 2°C. The report, Assessment Report 5 or AR5, alluded to a concept called “carbon budget”.

IPCC explained that in order to have atleast 66 per cent chance to limit global warming to 2°C or less we can only emit 1 trillion tonnes of carbon from the beginning of the industrial age upto the end of this century.The one trillion figure getsfurther reduced to 800 billion tonnes of carbon when emissions from other non-CO2 greenhouse gases are factored in. This concept is an innovative approach and has the potential to change the discourse on climate change as it can help determine the scale of changes required to keep the global temperature from increasing by 2°Cor more.

The carbon budget is akin to a credit card, where every time a person swipesthe card he or she is unable to pay the dues; thenthe debt to the credit card company is increased and it keeps getting difficult to repay the charges. In the same way, the longer the world takes to reduce CO2emissions, theamount to be reduced will be more difficult to achieve. Additionally, just as the interest accumulates on a credit card, the planet accumulates CO2 emissions and lock-in CO2 intensive technology, making it harder for the future generation to repay the debt.

The alarming fact is that out of this 800 billion carbon budget, the world hasalready used up 531 billion tonnes of carbon. Less than one-third of the budget is left which has to last up to end of the century so that the temperatures stay within limits. But given that the world is currently emitting about 50 billion tonnes of GHG every year, this budget is likely to get exhausted in the next 15 to 25 years.

This figure must serve as a reminder on how much carbon dioxide can be poured into the atmosphere before the planet gets overheated. But instead of devising mitigating measures, the world leaders are divided over how to allocate the remaining carbon budget.

Qin Dahe, the Chinese co-chair of IPCC, rejected any notions of reducing the country’s reliance on fossil fuels,saying it was “impossible”. Other developing nations have same concerns because developing nations are coerced into shouldering an unfair amount of burden of emissions reduction when the same process of relentless use of fossil fuels helped the developed nations attain economic prosperity.

400 ppm mark
In 1958, a geochemist, Charles Keeling, developed a scientific method to measure the levels of CO2 in the atmosphere at the Mauna Loa Observatory in Hawaii.

This was the start of the Keeling Curve, which later went on to become a poster child for climate change, explicitly indicating the impact of human agency on Earth’s climate.

Last year,the world reached yet another grim milestone foratmospheric concentration of CO2—it reached 400 parts per million (ppm). This means that three out of 10 molecules of CO2 in Earth’s atmosphere is a result of human activity. High concentration of CO2 acts like a blanket, trapping heat and warming our climate further. Crossing this mark shows how much CO2 we have pumped into the atmosphere since pre-industrial times. This figure is set to reach 450 ppm by 2040. It is not mere coincidence then that there are more frequenthotter days, extreme weather events in quick succession, rising sea levels and a descent into ecological chaos and conflict.

The only way to turn down the earth’s thermostat is to dramatically reduce emissions of carbon dioxide and other greenhouse gases through transitioning to low carbon economy.

Emissions milestone
China’s per capita emissions has reached a record high, according to the Global Carbon Project’s annual report on global emission trends. Since the climate negotiations began in 1992, the emission profiles have been very dynamic due to aggressive economic growth seen in developing countries. In 1990s, more than two-thirds of world’s emissions came from developed countries. In contrast to that, currently only one-third of world’s emission come from these countries, while the rest come from the developing countries and emerging economies that support 80 per cent of the world’s population, potentially leading to further increase in global emissions.  If such trends continue over the next few years, we could see an overhaul in the current emissionshierarchy where China could emit as much as the US, the EU and India put together. However, it must be noted that a significant part of these emissions are in fact driven by the demand of consumers in developed nations.

Using another indicator, emissions from fossil-fuel combustion and cement production, the top CO2 polluters were China -28 percent, the US, 14 percent, the EU 10 percent, and India 7 percent. This means that the world’s top fourpolluters account for 58 percent of total emissions. These trends clearlyshow that anthropogenic activities from major economies have caused drastic change to the climate.

There is compelling scientific case to reduce developed nations’ emissions by 40 per centby 2020 and 80 per cent reductions from all nations by 2050.

As the curtain closes on the climate summit, we have not even aimed for 50 per cent of the goal.Can the world leaders afford such modest goals? With financial and emission reductions pledges, modest or otherwise, we move forward inch-by-inch towards a global climate deal.