2020 US polls: How Democrats plan to tackle climate change

The race for the Democratic candidacy for the 2020 US Presidential Election is heating up. While the field consists of about 20 hopefuls, Elizabeth Warren, Bernie Sanders, Joe Biden and Kamala Harris are the four candidates currently leading the polls. How does climate change figure in the democratic debates and what are the major candidates’ plans for mitigating US emissions?

Support for the so-called Green New Deal (GND) has become a touchstone for gauging candidates’ commitment to climate action. It refers to New Deal by former President Franklin D Roosevelt’s during Great Depression. It is a broad plan to reduce US emissions, create jobs and address stark inequities that have been floating around for a few years in the country.

In popular discourse, it is usually referred to a non-binding resolution piloted by the firebrand young Congresswoman Alexandra Ocasio-Cortez and was defeated in the Senate in March 2019.

The centerpiece of the GND’s climate agenda (and the only clear target) is to switch US power production entirely to zero-emission sources by 2030. Ambitious as the aim is, proponents of the GND offer scant detail, either in terms of technology pathways and overall emission reduction or costs.

While it is argued that the latter is irrelevant as the programme can be financed through deficit spending (which not everyone agrees with), the failure to produce even broad figures has made it hard to take the plan seriously. This has also allowed skeptics like President Donald Trump to make the absurd claim of $100 trillion cost for the plan. Nevertheless, the GND has been embraced to varying degree by all major candidates.

This embrace of the GND, however, does not automatically make the Democratic proposals ambitious. We are looking to the leading Democratic candidates for evidence of:

The Paris Agreement finds mention in most Democrats’ stump speeches, for being former President Barack Obama’s signature achievement if nothing else. That Agreement, however, represents the starting point for any ambitious climate policy, which the future US President needs to view as a springboard, and not as an aspiration.

Vice-President Biden’s plan seems to take this tack, stating that he will “not only recommit the United States to the Paris Agreement on climate change — he will go much further than that.”

He intends to “lead a major diplomatic push to raise the ambitions of countries’ climate targets”, and has committed to “convene a climate world summit to persuade (major carbon emitting nations) to join the US in making more ambitious national pledges, above and beyond the commitments they have already made” within the first 100 days in office.

Other candidates do not have such ambitious plans on the Paris Agreement, but have merely expresses vague disagreements with Trump’s plan to withdraw from it and made commitments to re-enter the Agreement.

While the GND mentions the 1.5 degree target, it merely notes that global emissions will have to hit net zero by 2050 to achieve the same, without recognising that the US, as a massive historic polluter which has built up the economic capacity (if not the political will) to transition beyond fossil fuels, should be aiming at a net zero carbon economy well before 2050.

Even Washington Governor Jay Inslee, the so-called “climate candidate” for the Democratic nomination (who is currently polling at only 2 per cent) advocates only a 2045 target for net-zero emissions, while Biden advocates a 2050 target.

Major candidates are relatively silent on the international equity commitments on climate change, on which even the GND is quiet.

Warren, meanwhile, has proposed a Green Marshall Plan envisaging a commitment of $100 billion over 10 years to help finance the purchases of American-made clean technology by foreign governments. Her plan is notable for its mention of international finance, but the amount is too low. It is in the form of loans rather than aid and is tied to the purchase of American-made goods.

The issue of domestic equity and a just transition has assumed the front and centre of the Democratic discourse on climate change and the issue is central to the GND.

While Warren and Sanders have been long at the forefront of the call for equity (climate or otherwise), Harris has teamed up with Ocasio-Cortez to come up with a “Climate Equity Plan”, motivated by a desire to avoid repeating the mistakes of Roosevelt’s original New Deal, which “excluded the people of colour — particularly Black Americans — from enjoying its full benefits.”

The Climate Equity Plan document emphasises the central role of vulnerable communities in climate policy making, seeking (for example) to ensure that “environmental and climate-related legislation receive an equity score that will transparently estimate the impact on frontline communities”.

It pushes to “establish an independent Office of Climate and Environmental Justice Accountability to represent the views of frontline communities in rulemaking”. 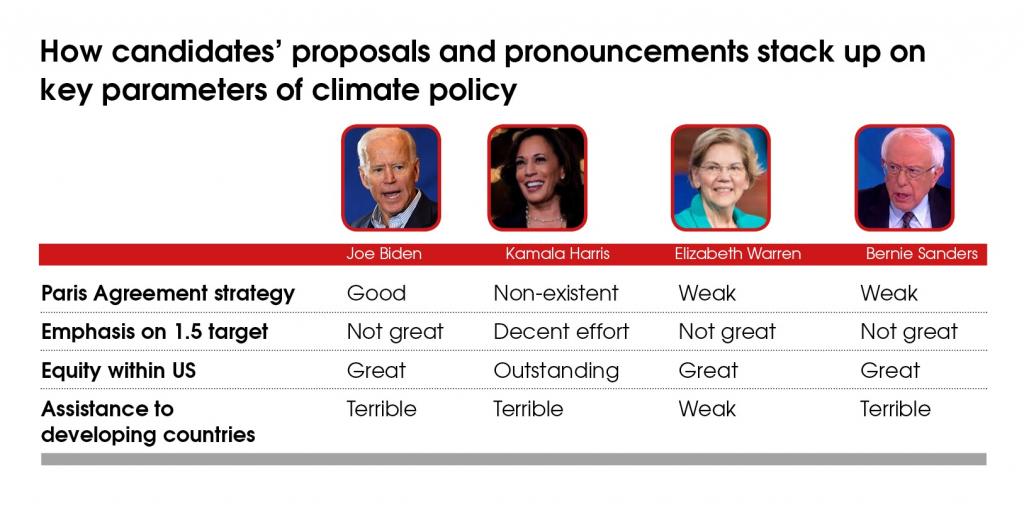 Among the four major candidates, only two have announced specific spending plans. Notable in his absence is Vermont Senator Sanders, who, despite having had perhaps the strongest record of supporting climate action legislation and taking on the fossil fuel industry, is yet to provide much detail on his plan for climate change.

Besides supporting the GND, his campaign calls for infrastructure to protect communities that are most vulnerable to climate change and support for high-speed rail, electric vehicles and public transport. Sanders, who has long called for an end to fossil fuel subsidies, also calls for a ban on fossil fuel exports, on new fossil fuel infrastructure as well as fossil fuel leases on public land.

In terms of spending, Biden intends to make a federal investment of $1.7 trillion between 2020 and 2030, which he claims would stimulate additional private sector and state and local investments to total to more than $5 trillion. This would include investing $400 billion over 10 years in clean energy research and innovation.

Biden’s plan is to be funded by reversing Trump’s tax cuts, as well as cracking down on tax avoidance.

Warren has also promised a “Green Apollo Plan” to spend $400 billion over 10 years for clean energy research and development centered on a new National Institute of Clean Energy. She has also committed $1.5 trillion over 10 years to procure American-made clean, renewable and emission free products with her “Green Industrial Mobilisation” plan.

This $2 trillion plan (including the Green Marshall Plan) is to be funded by cracking down on corporate tax avoidance. Warren has further committed to a total moratorium on new fossil fuel extraction projects on public land, committing instead that 10 per cent of the country’s electricity will be generated by renewables on public land or offshore.

While Warren’s spending plans are ambitious they lack a timeline to phase out fossil fuels. Thus, the emphasis on research is something of a distraction and even an excuse for delayed action, considering that technologies to mitigate a significant chunk of emissions are already available off the shelf.

To summarise, none of the major candidates’ plans go far enough by way of mitigation to address the US’s historical responsibility on climate change and are scant on details of targets and how to get there. Most barely address the international aspects, be it assistance to developing countries or on using the Paris Agreement as a springboard to enhance global climate action.

None addresses the issue of American consumption, which continues to grow despite already being amongst the world’s highest; indeed the attention is on the opportunities for further jobs and industrial growth in the US.

It is unlikely that these plans will enable the full and rapid decarbonisation of the US economy that the planet desperately requires.