The next round of climate targets will worsen the crisis

The Paris Agreement of 2015 was accompanied by nationally determined contribution (NDC) targets set by countries domestically and reported to the United Nations Framework Convention on Climate Change (UNFCCC) process.

The NDC concept was developed as a long-term successor to the top down target setting mechanism in the Kyoto Protocol. By embedding target setting at the domestic level across countries, the agreement sought to steadily scale up global ambition.

On this front, the NDCs submitted in 2015 are insufficient. They are, admittedly, a significant improvement over the ‘baseline’ scenario, which was laid out in the IPCC’s Fifth Assessment Report published in 2014. Without the NDCs, we would be on track for between 4°C and 5°C of warming by 2100.

However, their cumulative effect, even if all that was committed was achieved, would still take us well past 2°C and near 3°C of warming by the end of the century. 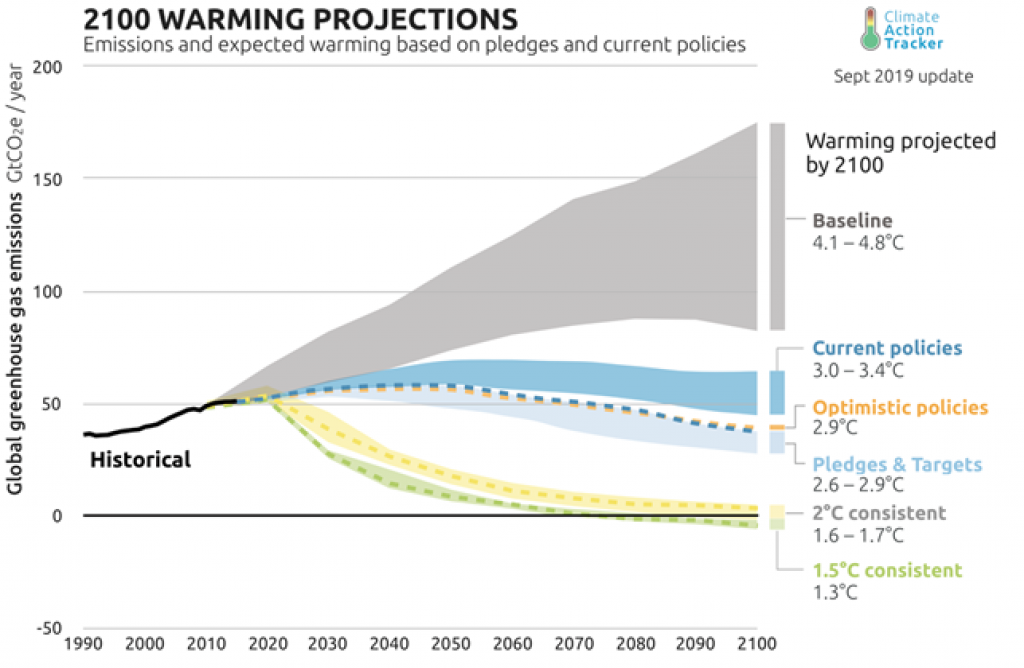 Worse, there are gaps between the NDCs and current policies. The European Union has made progress on decarbonising its energy sector and is likely to overshoot its Paris Agreement target. However, its transport sector emissions increased by 1.6 per cent between 2016 and 2017, cumulating in emissions growth of around 28 per cent above 1990 levels.

The United States is similarly not on track, despite a 13 per cent reduction in net emissions in 2017 compared to 2005. The choice of the 2005 baseline in its NDC masks the 3.2 per cent increase in annual emissions between 1990 and 2017. This is a result of persistent patterns of energy-intensive consumption.

The attention given to the transition of US coal fleet toward natural gas, for example, obscures the fact that its electricity generation consumes more fossil fuel today than it did in 1990. Similar to the EU, transport emissions account for 29 per cent of US emissions and have grown by a fifth since 1990.

Overview of the status and progress of G20 members, including on Cancun pledges and NDC targets 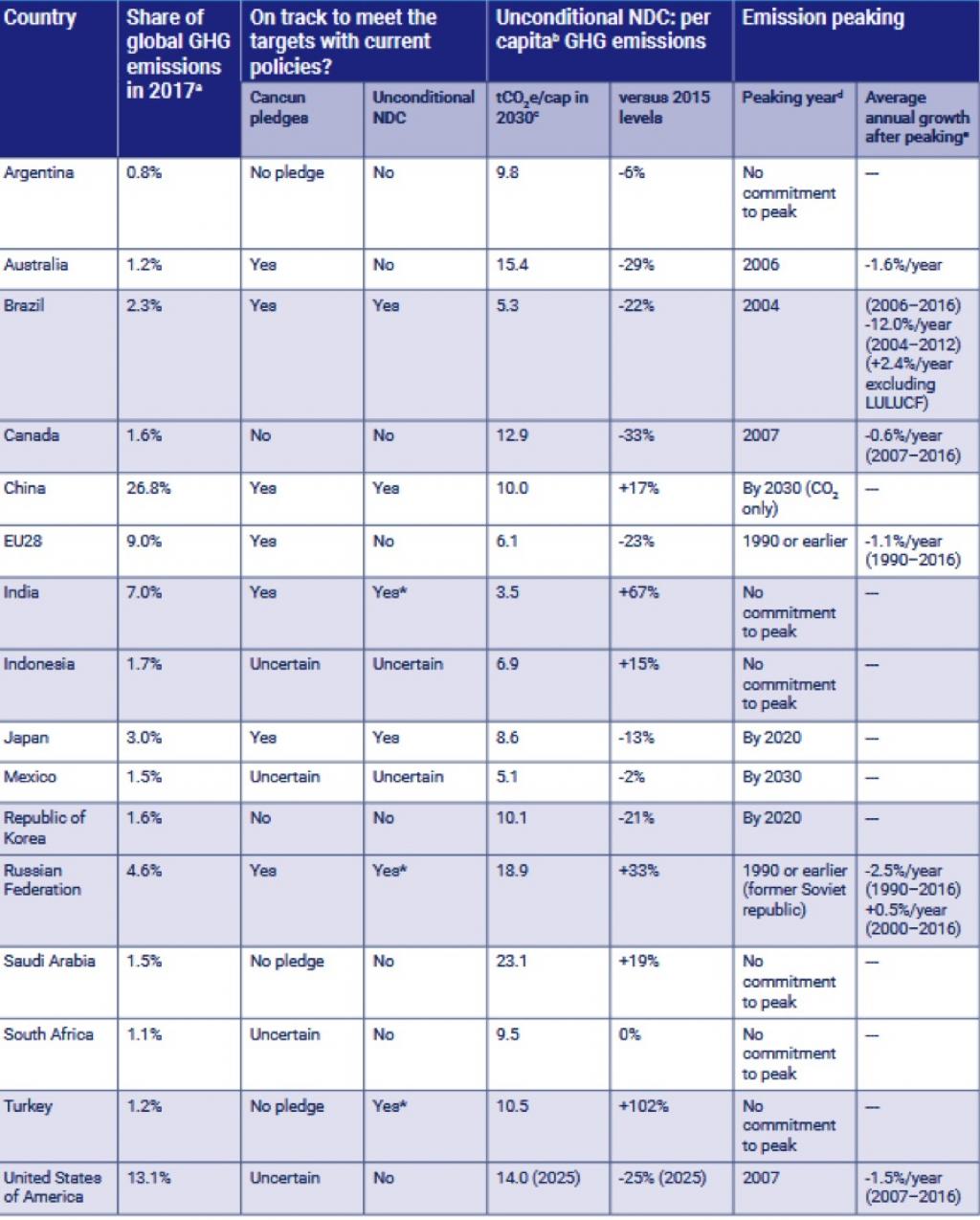 India is likely to meet its targets for renewable energy and energy efficiency committed at Paris. However, it is lagging critically on its commitment to create a forest carbon sink equivalent to 2.5-3 billion tonnes of carbon dioxide (CO2) by 2030.

Yet, India has one of the most ambitious targets among major economies and is far closer to being on track than most others.

China has committed to peaking its annual emissions by 2030 and ensuring a 20 per cent non-fossil-fuel share in its energy mix. It has implemented the policies to achieve these targets. In contrast with India, however, China’s NDC is irreconcilable with a 1.5°C or 2°C-consistent pathway. It will have the opportunity to correct this deficit in 2020.

The second constraint on NDCs imposed by the Paris Agreement is that each party shall communicate a NDC every five years (article 4.9), and that each successive nationally determined contribution will represent a ‘progression’ beyond the party's then current NDC (article 4.3).

The second rounds of NDCs, representing progress, are hence expected in 2020 (five years after Paris). In September this year, the United Nations Secretary General hosted a Climate Action Summit to build momentum towards ambitious new NDCs.

The emphasis was on announcing new quantified targets or initiatives. However, the summit made more headlines for youth activism and protests, than for any significant new commitments.

Cumulatively, the countries who have declared or indicated their intention to update their NDCs in 2020 represents less than 20 per cent of global emissions.

Only one country, the Marshall Islands, responsible for a negligible percentage of global annual emissions, has formally submitted a post-2020 NDC to the UNFCCC.

Among those who have signalled intent, the most significant is the European Union (7.41 per cent of global annual emissions), which found internal consensus on increasing its renewable energy target from 27 per cent to 30 per cent of the energy mix by 2030, alongside an increased energy efficiency target of 32.5 per cent, up from 30 per cent.

Germany’s contribution to this target is centred on its plan, announced earlier this year, to shut down all coal power plants by 2038. France’s new climate law raised its target of reducing consumption of fossil fuels, from 30 per cent by 2030 to 40 per cent.

Mexico (1.49 per cent of global annual emissions) currently aims for its 2030 emissions to be 22-to-36 per cent below levels seen in 2000, and a 50 per cent reduction in 2000 levels by 2050. These targets were submitted as part of a mid-century strategy published in 2016, and Mexico contends they are consistent with the 2°C threshold.

It intends to communicate a new NDC in 2020, but there is no indication of whether it will be 1.5°C consistent, or by how much it will raise ambition.

Similar concerns exist with South Korea (1.29 per cent of global annual emissions), which published its 2050 strategy in 2009, ie before the Paris Agreement legally established the 1.5°C and 2°C thresholds to assess the NDC ambition.

Two countries who have not indicated post-2020 ambition increases may, nevertheless, show some movement in the coming 12 months.

In the United Kingdom, the national climate law enshrines a net-zero emissions target by 2050, which the Conservative party intends to honour. Labour proposes to go further, by setting a net-zero target by 2030.

Other significant emitters who have announced an intention to update targets in 2020 include South Africa (1.08 per cent of global annual emissions), Nigeria (1.01 per cent), Argentina (0.91 per cent) and Ukraine (0.70 per cent).

As rapidly developing economies, these countries will need to significantly ramp up ambition between 2030 and 2050. It is unclear whether the domestic policy frameworks to do so currently exist.

The lack of specific ambition increases from this group, however, pales in comparison to the abdication of responsibility by much larger economies. The ignominy cuts across the old Kyoto-era divisions — the United States, Australia, China, Russia and Brazil are united by precious little other than their disregard for the spirit of the Paris Agreement.

If this conceit continues, the gradualism of the NDC process will come to be regarded as an unaffordable luxury.