Count the natural debt, too 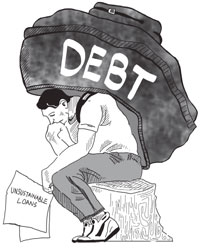 Now that Europe’s debt crisis is unfolding all around us, shouldn’t we question why the world is determined to live beyond its means and not worry how it sabotages our common future? The debt crisis is a mere symptom of a deeper malaise. The fact is that countries, private companies and individual households can run only if they can borrow against their assets and hope that the debt will grow slower than the value of their asset. Most financial analysts will now tell you that this business is doomed because of the Ponzi scheme nature of the loan business, where borrowing is used to speculate to get more loans and so repayment becomes difficult and over time impossible.

But this analysis is myopic as it misses the real nature of the problem: economic growth, as we see it, means living beyond one’s means. The cost of development has risen to such an extent that nothing is possible without loans or subsidy. Take agriculture in the debt-strapped rich world. It’s a fact that growing food is now so expensive that it needs huge subsidy from the public exchequer to be feasible (if not profitable). In 2010, the European Union spent some US $70-80 billion (47 per cent of its budget) on direct payments to farmers to keep them in business.

The story is the same in other parts of the developed world. But what is not explained is that this subsidy is needed because of rising costs of land, labour, other inputs and environmental safeguards. Growing food is expensive indeed.

Same with education: In the US, student debt has risen sharply—from $80 billion in 1999 to anywhere between $550 and $800 billion by June 2011, according to US Federal Bank estimates. Now as unemployment looms, loan delinquency is on the rise because graduates do not have money to pay back. By June 2011, student loan delinquency was almost as high as the credit card non-repayment rate of 12 per cent. But what is not discussed is why the cost of education, particularly in the for-profit college industry, is increasing and how sustainable is this rise in the long run. The education story holds for other sectors as well. Rising health costs mean higher costs of insurance or lack of medical support for most. The list goes on.

The fact is that cost of development is high. It makes money for a few but is unaffordable for most, because it is the exchequer that has to subsidise this development. This, in turn, increases public debt to crippling levels.

What is not even discussed in the context of the current debt crisis is the other debt, which has been accumulated for growth. Each country’s release of carbon dioxide and other greenhouse gases into the atmosphere has reduced the cost of its growth. It is a loan from nature for economic development. But the cumulative emissions of a country—one country, the US, has contributed 26 per cent to the stock of emissions between 1950 and 2007—must be added to the cost of growth. In the case of natural debt, economies borrow the assimilative capacity of the environment by releasing waste gases faster than they can be removed naturally. This natural debt is similar to the financial debt of a nation, because it is a loan from nature taken to grow faster and at lower costs.

The combined cost of growth is evident for all to see. The financial debt is leading banks and economies to collapse, while the natural debt is taking the climate to catastrophe, adding to costs of economic repair and increasing the costs of growth itself.

This growth model should be on the line when the world meets to discuss climate change. The financial debt crisis is linked to the natural debt crisis and this is the real cost of growth that the world cannot afford.

Question should also be raised whether the still-emerging world can afford this costly growth model. Remember, the cost of energy is higher today than it was when the now-developed world was building its infrastructure for development. Remember also that infrastructure in the emerging economies has not even been built. Financial loans are crippling the developed world now, when its development infrastructure is more or less in place; when its cost is to maintain this infrastructure or to regenerate or improve its efficiency or environmental performance. Remember also, its population growth is stable or even negative. This does add to costs that have to be paid to ageing segments, but it does mean that it has fewer or equal numbers of people to provide for. But our world needs development that has to reach millions of people—and millions more will be added to its populations in the years to come.

It is time the world asked some really tough questions and looked for new answers. Can we go ahead with this unaffordable and unsustainable model of growth? Can we not do better than to tinker with the same economic systems that only bring more pain and more systems collapse? It is time we joined the dots—the financial debt and the natural debt—to look for the answers that matter.