The US administration reneged on its earlier undertaking on the Kyoto Protocol, choosing instead to come up with its own climate change strategy: one that does not fool even the US' staunchest allies. By 2012, this strategy is likely to result in a 30 per cent increase, over the 1990 levels, in the emission of greenhouse gases 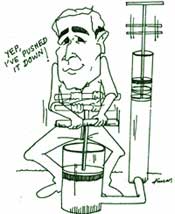 A constructive critique should consider desirable consequences, intended or otherwise. The Bush administration's climate change plan, us Climate Change Strategy: A New Approach , obviously deserves the same treatment, particularly in the light of the numerous domestic initiatives that have recently sprung up in the us , and their potential effects on the developing world.

Under the Kyoto Protocol, the us -- by far the world's largest emitter of greenhouse gases (ghgs) -- was meant not only to slow down but reverse the growth of its emissions to reach a target level of seven per cent below its 1990 emissions. In March 2001, us President George W Bush de facto reneged on this undertaking by the pervious administration, which had signed the Kyoto Protocol.He declared that he would propose his own strategy, and not seek ratification of the protocol, because he was worried about its effects on the us economy.
Instead of setting absolute emission reduction targets (as in the Kyoto Protocol), the Bush strategy frames its overall target relative to economic growth in terms of so-called 'emission intensities': emissions per unit of gross domestic product (gdp). Specifically, the aim is to reduce the aggregate us ghg intensity from its present 0.183 kg/ us $ to 0.151 kg/ us $ - 17.5 per cent by 2012. That this is only 'business as usual' becomes clear in the context of the fact that during the 1990s, the us emission intensity decreased without any significant climate change policy by 17.4 per cent.

The consequence, using the us administration's own economic projections, would be a 30 per cent increase in us emissions over 1990 levels by 2012, which also happens to be the end of the Kyoto commitment period. Compared with the absolute reduction undertakings by the remaining G7 economies (see graph: Hidden cost of the Bush strategy), it must be curious for them to read in the Bush strategy that its us target is "comparable to the average progress that nations participating in the Kyoto Protocol are required to achieve".

Even the us' staunchest allies have criticised the Bush strategy. Japan, for example, asked the us to set targets to actually reduce emissions of heat-trapping gases rather than seek cuts in the so-called 'greenhouse gas intensity' during bilateral working-level talks on climate change held in Washington on March 1, 2002. Canadian environment minister David Anderson, meanwhile, is trying to press Washington to do more to curb emissions of ghgs with his us counterpart. According to uk environment secretary Margaret Beckett, "Britain has protested at the highest level to President George Bush about his environmental policy, [which] is very disappointing and will not work."

But maybe we should consider the potential (positive) effects of the largely 'voluntary' measures included in the strategy on the numerous fledgling domestic initiatives in the us . A recent submission to the American Bar Association's Committee on Climate Change and Sustainable Development - co-authored by two former heads of the us delegation to the climate negotiations: Stuart E Eizenstat and Frank E Loy (with David B Sandalow) - seems sceptical: "The plan fails to deliver what it promises. Budget requests that are billed as 'increases' in fact mask cuts of more than us $52 million to important technology development programmes, including those for solar energy and energy efficiency. The tax incentives proposed - us $7.1 billion over 10 years - are actually us $2.2 billion less than those proposed by the Clinton administration and...not large enough to serve as a meaningful incentive for innovation."

It thus seems that the most positive thing to be said about the 'domestic arm' of the Bush strategy is that it is internally consistent: It does not set out to reduce domestic emissions in any significant manner, and it won't do so.

To start with, there will be spillover effects from its 'domestic arm', and developing countries - most of which have negligible historic responsibility for the problem - are going to bear the brunt of them. While it would be taking conspiracy theories too far to claim that these spillovers are intended, it will not be possible to reject liability for the additional adverse impacts by pleading ignorance.

There are, of course, effects on the developing world, which the strategy explicitly intends to happen. The strategy leaves no doubt about its main developing country goals:

Although there are serious theoretical doubts about intensity targets, there is no doubt that some countries have managed to decrease their carbon dioxide intensities, over the past decade(s). Like the us , China has been particularly successful in its intensity improvements, with a reduction of around 50 per cent during the 1990s alone. Unlike the us , however, China managed to reverse its emissions in the process, leaving them by the end of the decade nine per cent lower than their 1996 peak, without prejudice to a remarkable economic growth of seven-nine per cent annually.

Not withstanding these 'success stories', intensities are rather less neutral with regard to economic growth than the strategy makes them out to be, most so in the context of economic recessions or outright collapse. While by the end of the last decade, the carbon intensity of the Indian economy has just about returned to its 1990 level, the Russian one never recovered from the economic turmoil following the collapse of the Soviet Union. And yet, while uncomfortable, the Russian intensity deterioration of around 15 per cent pales into insignificance relative to the more than 230 per cent experienced by Sierra Leone during the 1990s.

Sierra Leone, one of the poorest countries in the world, has one outstanding characteristic that sets it apart in this context: its per capita carbon emissions. At 24 kg (carbon) - 24 times smaller than the Chinese, 182 times smaller than the Russian, and 215 times smaller than the American - the 1990 per capita emissions of Sierra Leone could not have been far off the minimum needed for mere survival. And it is not difficult to imagine that, at this subsistence level, emissions are very easily de-coupled from gdp , particularly in the case of negative growth or collapse. When emission levels reach the subsistence floor, they will not follow gdp growth in economic recessions just to safeguard emission intensity.

Apart from us $25 million and us $40 million to fund a 'climate observation system' and the 'debt-for-nature' forest conservation programmes, respectively, the strategy is intent on 'fully funding the global environmental facility' with us $178 million (including us $70 million arrears). The most significant amount budgeted to be spent in connection with developing countries is us $155 million for usaid (United States Agency for International Development), serving "as a critical vehicle for transferring American energy and sequestration technologies to developing countries to promote sustainable development and minimise ghg emissions".

For most individuals, us $328 million would be a significant sum of money. The amount appears less significant than the Bush strategy claims it is in the context of the us budget for the financial year 2003. It is important to note here that Bush had recently asked the Congress for a us $68,000 million increase in defence budget to combat global terrorism. It should also be clear that us $155 million would not be able to buy a lot of technology for transfer to the developing world, but then again, it may not be meant to. 'Technology transfer' can also be read as a euphemism for straightforward 'export'. After all, the initial report of the Cabinet-level us climate change policy review made the same point in slightly less euphemistic terms as: "Promote the export of climate-friendly, clean energy technology."

Notwithstanding the view of Al Sabban, head of the Saudi Arabian delegation to climate negotiations, that in light of the " us Kyoto alternative...the Protocol has become worthless as far as its effectiveness in reducing total ghg emissions or even in slowing their growth are concerned", the interests of the vast majority of developing countries will be much better served by the multilateral regime of the Kyoto Protocol than under the Bush strategy. In the interest of all concerned, the us should be engaged in a constructive dialogue to return to this multilateral process.