Nothing more than a vote-catcher, Andhra Pradesh's cheap rice scheme has resulted in an ecological disaster in its drought-prone areas

By A Ranga Reddy 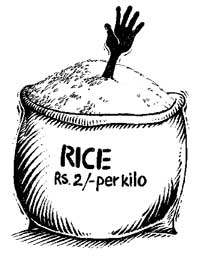 in december 1984, the Telugu Desam (a regional party in Andhra Pradesh), came to power and introduced a scheme to provide the poor households of the state rice at a nominal cost of Rs 2 per kg (it has since been revised to Rs 3.50 per kg). The cheap rice scheme, which is still in operation, deems a household as being poor if any of the following conditions apply -- the family has an annual income of Rs 6,000 or less; or tills upto 1.2 ha of unirrigated land or 0.6 ha of irrigated land. Abject poverty and high rates of inflation have helped in the exchange of numerous votes for the huge subsidy that the state is shouldering. Nearly one crore households of the state have come under the purview of the scheme.

The aim of the scheme is apparently to alleviate poverty. Not only has it failed miserably in doing so, but has imposed an ecological crisis on the drought-prone Rayalseema region of the state. While earlier, the area's farmers cultivated flowers and food crops like pulses, oilseeds and vegetables, nearly 70 per cent of them have now switched over to cash crops like sunflower, groundnut, sugarcane and mangoes. Not only have these grabbed the lion's share in terms of the area cultivated, but have also prompted a shift from polyculture to monoculture. This has resulted in the disap pearance of many items from the peo ple's food basket and affected the village economy. The villagers have consequently become heavily dependent on the urban economy for their supplies. Shortages in food, feed, fuel and water have increased.

As farmland becomes dearer, the region's powerful farmers have encroached upon common property resources like grasslands, tanks and rivers. They have not even spared burial grounds. The thinning of forests has resulted in rainfall being more sporadic than it was earlier. The availability of cheap power has encouraged the misuse of scarce water resources and further depleted groundwater levels. The traditional community tank irrigation system has suffered because large farmers have installed borewells.

The shift to commercial farming has dealt indigenous drought-resistant varieties of seeds and techniques of cultivation a fatal blow. Since cheap rice is delivered to these farmers almost at their doorsteps, there is no longer the need to cultivate drought-resistant varieties of food crops. The lack of incentive to grow millets like jowar , pulses and vegetables -- regarded as the most vitaminised foods for sub-tropical people -- has affected the nutritional status of the population.

The state's fair price shops should ideally sell both rice and millets, construct godowns in villages and create buffer stocks of different grains by collecting the local produce. The government, ngos, social workers and the scientific community ought to propagate the fact that millets are more nutritious and rich in vitamins, encourage the cultivation of drought-resistant local varieties and the shift back to polyculture.

With the introduction of high-yielding varieties and mechanisation, the number of working days has drastically reduced. As a result, seasonal migration has became a regular phenomenon. Despite wage rates for all farm operations having marginally increased, with a reduction in the number of working days, poverty has increased by leaps and bounds. The cheap rice scheme has not enhanced the incomes of artisans, small farmers and farm labourers in any significant manner. To the contrary, it has reduced many of them to the ranks of migrant farm labourers.

Other experiments have been far more successful in tackling poverty and hunger. The Maharashtra government has been successfully operating the employment guarantee programme since the '70s to help generate income and employment. Anna Hazare's role in changing the status of the drought-prone Ahmadnagar district of Maharashtra from one of poverty to plenty has been welcomed by both World Bank personnel and Indian policy-makers. Creating and enhancing the purchasing power of poor households is better than sanctioning doles.

A Ranga Reddy is a reader in economics at the Sri Venkateswara University, Tirupati, Andhra Pradesh