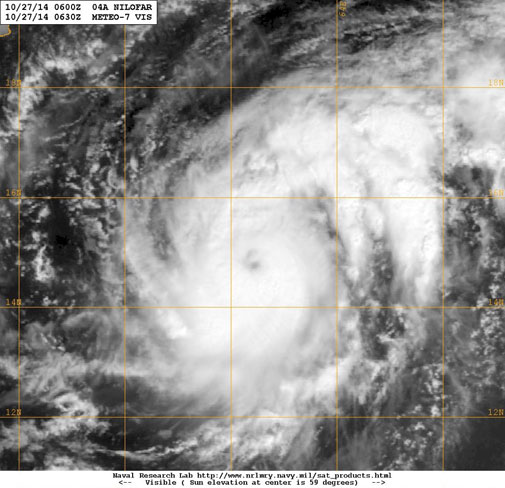 This morning, Tropical Storm Nilofar intensified to a Category 1 cyclone and has become the first cyclone to intensify beyond tropical storm strength in the past four years after Cyclone Phet. It seems that Cyclone Nilofar is following the footsteps of Cyclone Phet as the path it seems to be taking is comparable (although not exactly) to the one Phet took in June 2010. 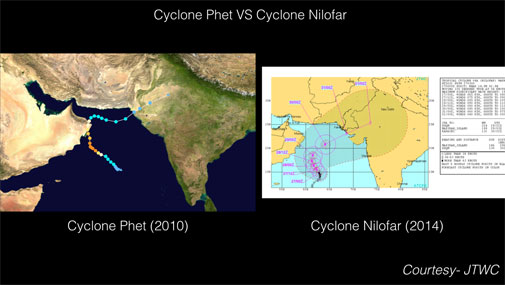 Monday morning’s update from US’ Joint Typhoon Warning Centre (JTWC) says that Cyclone Nilofar has maximum sustained winds of 65 knot (120km/hr), gusting to 80 knot (148km/hr). The cyclone was located at 14.9°N,62°E, according to India Meteorological Department at 8.30 am (IST), which corresponds to about 1,179km south-west of Naliya in Gujarat  and 880 km east-south east of Salalah, Oman. The cyclone is a bit of slow mover, and has moved north-north-westward with a forward velocity of about 7km/hr (as observed by JTWC).

This slow velocity of Cyclone Nilofar is helping it to intensify. My previous post  had explained how Nilofar could weaken because of the dry air surrounding the system. Dry air is slowly wrapping around Nilofar as can be seen in this animation of Total Precipitable Water, a parameter which gives an idea of how dry/moist the troposphere is. The “9” shaped brownish region in the Arabian Sea (when the animation starts) is Nilofar. The purple/blue shade wrapping around is the dry air.

But it looks like the dry air is yet to reach the central part of the cyclone (where its engine is which keeps the cyclone alive) and choke it. However, this choking is likely to initiate around the evening of Wednesday, October 29 when we expect the dry air to arrive in the engine. What’s more high vertical wind shears will hit the system and cause it to weaken rapidly, which is good news for Gujarat.

But what will happen till October 29?

Cyclone Nilofar is enjoying a very warm Arabian Sea which continues to have a Sea Surface Temperature (SST) of 29°C. Plus the vertical wind shear is just 5-10 knot, providing a light interference. For the next 48 hours from this post (till October 29), vertical wind shear is expected to remain less and the good inhalation-exhalation system (of warm, moist air) will help in further intensification of the cyclone. Given that almost all the conditions are favourable, chance of rapid intensification is a bit strong now.

The Hurricane Weather and Research Forecasting (HWRF) model (model update of 00UTC, October 27) also indicates a strong possibility of rapid intensification in the coming 24 hours. As per the estimates from agencies and models like JTWC, Global Forecast System (GFS) and HWRF, the system is likely to intensify to a zenith of Category 2 or even a Category 3 cyclone, as per the Saffir Simpson Scale, in these coming 48 hours.

Rains will initiate in northern half of Gujarat, particularly around Bhuj from Thursday. As of now, it looks like Nilofar will make a landfall as a "tropical storm” on Friday, October 31, bringing high velocity winds of about 110 km/hr, as per the present estimate. Heavy rains will be witnessed in this period.

Following are the districts in Gujarat which are likely to be affected by heavy rains, strong winds and where flooding potential exists (October 31 and November 1)—Kutch, Patan, Banaskantha, Mehsana.

People living in these districts should take precautions like stocking food and medicines and stay away from rivers as they may swell due to rains in this period.

Heavy rains will then shift to Rajasthan, particularly sestern part of Rajasthan on November 1. People must follow the weather updates as flooding potentials may extend in this state.