Eighty-four nations may have 'agreed' to ban the export of poisonous wastes, but major players in the trade like Germany could ruin the agreement even before it takes shape 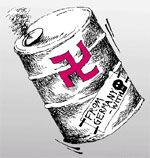 in september 1995, 84 nations met in Geneva at the third conference on the Basel Convention and agreed to ban the export of toxic wastes. The convention will come into force on January 1, 1998, if 63 of these 84 states including 24 oecd (Organisation for Economic Cooperation and Development) countries, ratify it beforehand.

"This is a great success, one of the greatest in the 25-year-history of Greenpeace," says Andreas Bernstorff, an activist with the organisation. Tough lobbying by Bernstorff at the third conference compelled some uncertain developing and opposing states into the agreement.However, even though the results of the September conference appear to be final, Bernstorff does not seem to have a cause for celebration as he knows that people opposing the move - like the International Chamber of Commerce, unions of metal dealers with the umbrella organisation, the Bureau of International Recycling (bir), and countries like the us, Germany, Brazil and India who gain from the trade in poisonous wastes - will try their best to prevent the ratification.

Business in poisonous wastes is lucrative for both parties although the levels of profit and risk vary. The importing (Southern) countries are keen to earn hard currency, for which they undertake heavy risks. The exporting (Northern) countries save huge sums of money. The cost of destroying or burning a tonne (t) of hazardous waste in these countries costs us $1,000-8,000, but the cost of exporting the same volume is a tenth of this amount.

As far as legal exports are concerned, Germany seems to be the world champion. For instance, in 1990, Germany packed off more than 0.5 million t of wastes (as compared to 14,000 t associated with the us). While the rules and regulations concerning the treatment of wastes within Germany are among the most stringent, those regarding their export are very lax.
Years of toil has scaled down the volumes exported worldwide. But this probably reflects a reduction only in official figures as the number and volume of illegal shipments is unaccounted for. Der Spiegel , the German political weekly had published a report (No 6, 1996) according to which Germany alone exported or tried to export poisonous wastes to at least 34 countries, including India. Greenpeace presented videotapes of one such case in Geneva at the third conference. The film showed employees of Bharat Zinc in Bhopal handling wastes imported from Germany and the Netherlands without any protection.

One method of illegal export is declaring the toxic waste as harmless. Indeed, exporters of illegal wastes seem to have developed their own glossary of terms denoting the various materials. Bernstorff has compiled a 'dictionary of waste-dealers'. For instance, what is declared as industrial rubber is actually old tires.

German underhandedness was recently in the limelight when seven persons accused of exporting 750 t of 'special waste' to Lebanon, were arrested in Germany. Hungarian officials have apprehended a similar consignment bound for Bosnia. The latter must have been particularly embarrassing for the Germans as the country has taken in more Bosnian refugees than any other state in the European Union (eu). Fifty containers with 773 t of 'special waste' were intercepted in Hongkong too. The governments of all these three countries have asked the Germans to take back the wastes. The Sueddeutsche Zeitung (a German daily) published a report in November 1996, which revealed the modus operandi of the waste-mafia. Although the wastes were generated by Germany, waste-dealer companies based in nations like Germany, the Netherlands, Belgium and Hongkong were involved in their export. The participation of many companies in different countries makes the process of finding those responsible for such shipments complex. As to which party will bear the costs of re-transporting the wastes is subsequently difficult to determine. Such illegal activities are bolstered by the fact that eu environmental regulations are strict. Moreover exports, which are normally favoured, are only sporadically checked. All this makes it easy for the mafia to operate.

The recent seizures of hazardous waste may have been substantial but experts are of the opinion that these are but a drop in the ocean. The future does not seem very bright either. The Basel Convention mentions only general criteria for prohibition. A technical group has been asked to draft a list of wastes to be banned for export. Meanwhile the bir has started a campaign in the British Parliament demanding a national law to remove all recyclable wastes from the list. Wastes would then be allowed for export if in principle they could be recycled. And if these conditions do come into effect, the Basel Convention would be worthy of the wastepaper basket.

Asit Datta is a freelance journalist based in Germany.