In spite of ample evidence highlighting the adverse effects of pesticides on wildlife, it continues to be used indiscriminately in India. Worse, the government has not yet incorporated any of the findings in its policies, nor has it conducted serious research on these lines 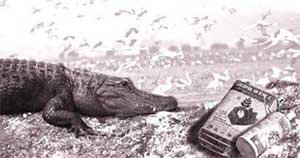 IN THE 1980s, researchers found something missing in Lake Apoka in Florida. Strangely, there were no alligator eggs in this lake known as a haven for alligators. Examining the surviving alligators very closely, the researchers found a strange deformity in several male alligators. Almost 60 per cent of them had deformed sexual organs. The hatching barely reached 18 per cent whereas in other lakes of Florida it was more than 90 per cent. More than half of the baby alligators did not survive for more than 10 days after hatching. Female alligators too had abnormalities in their reproductive system. After a through study, the researchers linked the disappearance of more than 90 per cent of the lake's alligators to the 1980 accidental spill of a pesticide from the Tower Chemical Company, located near the lake shore.

Intensive studies conducted in the developed nations have revealed the adverse effects of pesticide use on animal life. Realising the threat to wildlife, the West was quick to ban or restrict the use of certain pesticides. But, in India, the use of pesticides continues indiscriminately till date. Furthermore, neither has India incorporated the findings of the studies conducted in the West into its policies, nor has it conducted any research on these lines itself.

Organochlorines (pesticides) are used in India primarily because they are cost-efficient. But most of these chemicals exhibit carcinogenic properties and are non-biodegradable. Pesticides like DDT (dichlorodiphenyl trichloroethane), HCH (hexachlorocyclohexane, formerly known as BHC) and endo-sulphan have been banned in the developed countries for more than three decades. In India, the use of HCH was banned in April, 1997, and the use of DDT was restricted to vector control purposes in 1986, but their present levels in the environment are sufficient to cause damage to wildlife. Pesticides which are still in use in India include endosulphan, dicofol, aldicarb, carbaryl, diphenoxy acetic acid, dimethoate, methyl parathion and phorate.

Organochlorine pesticides have been in use in India for more than half a century now. The annual consumption of pesticides in India is about 85,000 tonnes of which organochlorines comprise the bulk. This despite the clear cut evidence suggesting that these chemicals have the ability to eliminate entire species from the planet.

• In the early 1970's, gulls' nests at the Channel Islands in southern California contained unusually large number of eggs when gulls are known to lay not more than three eggs at a time. It was found that all the female gulls were nesting together. Furthermore, most of these eggs had very thin shells. The behavioral change in gulls was linked to DDT exposure.

• A similar phenomena was found in Santa Barbara. Ducklings of water ducks, called mallard ducks, did not respond to the female maternal call. They were not able to recognise their mothers' call. It was found that these ducklings had high levels of DDE, a breakdown product of DDT. Mallard ducklings fed with DDE in the laboratory showed similar effects.

• In North America, the population of the bald eagles dwindled as a result of DDT poisoning. Thirty years after the pesticide ban, the population is recovering but these birds have not yet returned to Lake Michigan, Lake Ontario and Lake Huron. They are still suffering from a whole range of ailments - their eggs fail to hatch; a higher than average number of chicks die or are deformed; pairs fail to nest and adult males have become sterile.

• Laboratory tests on alligators have confirmed that as little as one part per million of DDE is enough to cause abnormalities in the development of an alligator's reproductive organs.

Pesticides interfere with some of the most fundamental biological processes in animals in many ways. As these chemicals act like an endocrine disrupter, they can cause reproductive failures and infertility in females; impair the development of offspring; lead to feminisation of males; disrupt the immune system leaving organisms more susceptible to disease and infection; contribute to the development of cancer and damage the nervous system, liver, kidney and other organs.

Pesticides have the potential to adversely effect life forms thousands of kilometres away from the point of application. Agricultural run-off contributes to pesticides finding its way to rivers, seas and finally the ocean. In Antarctica, seals, penguins, whales and dolphins showed high levels of DDT and mirex. Similarly, the polar bears inhabiting the Arctic showed DDT presence in their body tissues.

It is, therefore, shocking that the results of the studies done abroad have not been taken seriously in India. Dicofol, the pesticide responsible for the dwindling alligator population in Florida, is still in use in India. Although environmentally-safer pesticides are available, its high cost makes it unaffordable to the average Indian farmer. Hence, farmers continue to use pesticides like DDT, which is both cheap and easily available, insidiously for agricultural purposes.

So far, there are no reports on the impact of pesticides on wild life in India. Most of the studies in pesticides are limited to monitoring their levels in the environment. Research on monitoring has been going on since the mid 1960's. Nothing more has advanced since then, except the pesticide level in the environment. Research on the impact of pesticides on wildlife requires a specialised group of researchers who understand animal behaviour and can identify changes in the animals due to environmental contaminants. It requires interdisciplinary research where an animal behaviorist, toxicologist, taxono-mist and a biochemist work together.

In India, there is no centre where various disciplines can be brought together to pursue research on a single subject. Research, as a whole, has not been given priority in terms of funds and significance. There is again a hierarchy in research funding - the bulk of the research grants goes for physical science, followed by medical science. There is hardly any fund left for any other type of research work. It is the responsibility of the ministry of environment and forest to evolve a totally new set up, where interdisciplinary research is emphasised.

There is a desperate need to preserve all animals from exposure to chemicals. The existence of the ecosystem relies on the balance between terrestrial, aquatic and marine life forms. Every life form depends on another life form for survival. A break in the link may lead to a catastrophe, even the elimination of mankind. Developed nations realised the link and incorporated corrective measures. They relocated pesticide industries which were close to wildlife habitats, enforced regulations against indiscriminate use, fined offenders, banned DDT and other organochlorine pesticides.

If it could happen to animals, are humans far behind? A recent research reported a drastic decline in sperm count in humans. Does this mean that we are already suffering from the impact of pesticides?