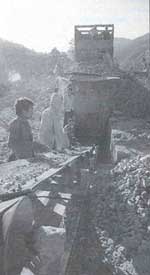 THE stone crushing units one witnesses while entering Haryana gives a crystal clear picture of the development taking place in the lives of the people there. Bonded labour, exploitation of women, environmental degradation, health hazards, the growth of slums and recurrent floods are some of the inevitable gifts inherited by the common people in the name of development.

Take Khanak village, 35 km from Hissar, for example. A cursory look at the surroundings gives a lie to the state government's claims that the units are working within legal parameters. There are about 100 stone crushing units in this area, each throwing up a dense cloud of dust. Thirty per cent of these units are encroaching upon the nearest villages. These units are blatantly violating the Haryana government's 1991 notification requiring them to keep a minimum distance of 3 km from human habitation, 1.5 km from the state highways, and 300 m from the link roads.

In the Chandimandir village on the Kalka-Simla national highway, in fact, the deadly units are placed almost bang on the road. And it is not just the situational laws that the units ignore. The law says also that no unit can run without a shed and a fountain, so that the level of pollution can be kept low. However, most of these units are without such pollution control devices. Naturally, most of the labourers are suffering from asthma or tuberculosis due to the insufferable working conditions.

Without doubt, these units are virtual deathtraps. During the past 3 or 4 years these units have taken more than a dozen lives. Ganga Devi, one of the labourers at Khanak, is suffering from tuberculosis. Her husband was also a victim of the same disease. All the labourers continue to work despite suffering from major illnesses, as the quarry owners do not sacrifice a single penny on their treatment. Asthma is the complaint of a vast majority of the villagers. What pains most is the affliction of the young workers and the new-borns.

Peep inside the utterly shabby hovel-like dwellings of workers and you will be shocked. These citizens of free India are leading an inhuman life. Seventy six bonded labourers were freed on February 3, 1995, from the units at Tilwala, Atela and Kapuri in Bhiwani district. This is not a new phenomenon in Haryana. Says Sunil Gulati, district collector of Bhiwani, "There are no bonds on the labourers. In fact, the so-called emancipated labourers were leading an equally miserable life. The contractors, besides paying high wages, also arrange for other amenities for the labourers" he assures.

But the volunteers of the Bandhua Mukti Morcha are not ready to accept the administration's statements. "The contractors not only make them sardonic labourers, but also force them to embrace abominable standards. Man Singh, one of the contractors, enticed some poor families from Madhya Pradesh to join work in his unit, assuring them of a daily wage of Rs 50. However, when it came to paying, he told them that they would have to remain satisfied with just a handful of flour", narrated Swami Agnivesh of the Morcha in a press conference.

The threat of an all-round environmental degradation is massive. The land here has become fragile, which results in heavy erosions during the rainy season. The floods wreck havoc every year and the Gaggar river damages the Nada bridge on the Kalka-Ambala road. The government has wasted huge amounts of public funds on the repairing the roads. In addition, another bridge over the Chandimandir-Burjkotian road has been constructed. Surprisingly, the motive behind the construction of this bridge is to facilitate the units. "The units run in and around Punchkulla on the Jirakpur-Kalka road shall continue to work till July this year", confirms one of the government sources. The decision was taken in July last year. But their closure after July will mean precious little, as there are other units spread all over the region.

It is therefore indispensable for the authorities to take up the matter immediately and strictly implement the laws. The entire gamut of activities here is illegal and anti-social. The errant contractors must be given exemplary punishment. And the amelioration of the working conditions, along with strict adherence to the laws are the only measures which can restore and justify the government's claims to being honest and democratic.

---Manjeet Sehgal is a working journalist.